THE EXPAT FACTOR | Scott Hallsworth is executive chef and co-founder of Wabi, specialising in innovative and seasonal Japanese cuisine with a contemporary European twist. Previously head chef of Nobu London, Scott has earned a reputation for pushing the boundaries of gastronomy and creating unique and interesting menus. 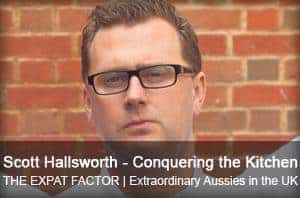 I first moved to the UK in 2001, because I wanted to gain more experience in the notoriously ‘bad-ass’ kitchens of London. I don’t think I had a plan about how long I originally wanted to come here for. Back then I did things in yearly blocks, so I wouldn’t have been looking much further ahead than that.

I ended up staying for six years. It was a challenge to begin with. When I first moved here I was employed at a much more junior level. The long hours, and sometimes the long commute home, was the hardest part. I grew into my first Head Chef role here in the UK — at Nobu London — so there were no pre-conceptions to deal with.

We achieved number seven and number 12 in the World’s 50 Best Restaurant list during that time, and I found myself cooking for all sorts of celebrities. It was a huge buzz and a fantastic experience. I moved back to Australia to open Nobu in Melbourne. After a few years I returned to London, and I’ve been here now for almost three years.

The biggest highlight of my time in London has to be opening Wabi London. We first opened Wabi in Horsham, West Sussex, and this has been followed by Wabi in Holborn, London.  It is the dream of every chef to have their own restaurant and to have complete control over the direction and creativity of the menus from produce to plate. It’s a tough market, but with passion, hard work and a sense of humour, it really is the best job in the world.

The produce in the UK is far more diverse than in Australia. I finally have the chance to work with ingredients that I could only read about in foreign cookbooks back home. At Wabi we use a broad variety of ingredients. I work with some of the finest suppliers in the country, from Nama Yasai – our organic Japanese veg and salad supplier, through to independent fisherman in Bristol.

I think a benefit to pursuing a career as a chef in London is the exposure you receive is on a truly global level. The environment here has taught me to be far more open-minded, competitive and accommodating. There are great networking opportunities available as well. We’re hatching a plan to develop further Wabi restaurants, most likely outside of the UK.

I feel like there are much more serious and career driven young Australians here now. Previously I felt it was more about teaming up with other Aussies to have drinking contests at the Walkabout. I think Australians come to the UK to have new life and career experiences. It’s also a great hub to travel from, and very affordable.

London is one of the most amazing places on earth. I’ve been here almost ten years and I’m still discovering new things. I get a huge buzz out of its history and diversity. I’d be lying though if I said I didn’t miss the Australian weather, and obviously my family. The weather here is more relentless than I expected — long cold winters, and often cold summers too. It took a bit of getting used to.

My typical weekend involves spending time with my wife and three kids back down in Horsham. Horsham is a great escape from London, and I’m always glad to be back down there at the end of the week. We do get to get away for the odd weekend too.

I’ve enjoyed all the experiences I’ve had in the UK. In hindsight they have taught me valuable life lessons. I would recommend to any Australian moving to London to get out and mix with the local communities, and avoid subscribing to the Australian hang-outs or pockets — you can do that when or if you ever get back home. Make the most of this incredible experience every day.

Scott Hallsworth is executive chef at Wabi. Wabi has a restaurant in Horsham, Sussex, and Holborn, London.