Aussies have fatter piggy banks than their UK mates

New savings report has Australia ranked number 1 in the world while the UK sits at 11th and is on a downward slope. 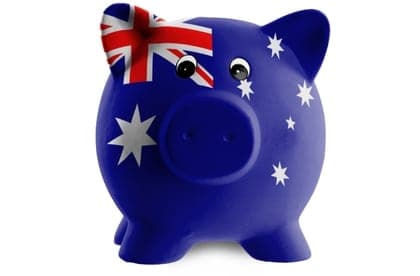 Research by the British Post Office has Australia topping the world of savers while the increased cost of living in the UK has reduced Britons’ ability to build a nest egg and it is going to get worse.

The Post Office’s Future of Savings report compiled with the help of the Centre for Economics and Business research showed that, on average, Australian households are able to save £8,746 a year, more than any other country in Europe and as much as £5,000 a year more than the Brits.

The saving habits and cost of living of 18 countries from the European Union plus Australia and the United States were examined and the startling results showed that the Brits’ saving habits are struggling and will decline even further.

Of all the European countries, Switzerland placed first saving £7,067 a year while UK households could only squirrel away £3,781.

Interestingly, even those in countries with struggling economies such as Italy and Spain manage to save more than Britons. Brits placed in 11th position – only slightly ahead of Portugal in 12th while, perhaps surprisingly, the USA languishes behind even them at 13th with just £3,442 left in their piggy banks.

The country last on the list is Estonia where households had only £1,039 spare annually.

Worryingly for Brits, according to the report, is the prospect that by 2018 their annual savings – the amount of disposable income left over after household essentials have been covered- will have fallen to just £3,000, leaving them more vulnerable in situations such as wage cuts or other economic shocks.

In 2013 the majority of households’ potential savings dropped from a peak in 2012.

According to ThisIsMoney.co.uk, Henk van Hulle, head of savings at the British Post Office, said: “While it’s great UK households feel more confident about their finances, it’s worrying that we’re seeing savings rates fall so soon after a recession.

“While spending is undoubtedly good for the UK economy, it’s not good for savers to neglect their pots and leave themselves vulnerable to a change in circumstance or wider economic shock.

“It’s all too easy to forget about the importance of savings, or fall into the trap of thinking it’s not worth it, because you don’t have much to save.

“However, saving a little and often, and within your means, can make a big difference, especially with the cost of living continuing to rise. And for us to create a long-term, sustained economic recovery, a strong savings culture is key,” said Van Hulle.