Julie Bishop among guests celebrating achievements of Aussie women in Britain at gala event held at Australia House in London. 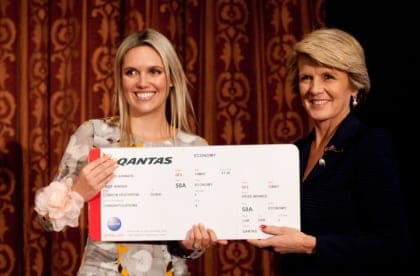 Sarah Ramwell is the 2014 Qantas Australian Woman of the Year in the UK.

The announcement of the annual award was made at a glamorous reception at Australia House in London on Tuesday. Guests at the event were spoilt with inspirational speeches by Australia’s Foreign Minister, Julie Bishop, Baroness Liddell of Coatdyke, MP and former British High Commissioner to Australia and Paola Totaro, Award-winning Australian journalist and President of Foreign Press Association in London.

Now in its seventh year, the star-studded event, hosted by Australian Business, celebrates the achievements of Australian women living in the United Kingdom and recognises individuals excelling in all walks of life.

Sarah Ramwell, Corporate Social Responsibility Manager EMEA, Reed Smith LLP, won the award from a shortlist of finalists including three other influential Aussie businesswomen. Sarah is a lawyer with a specialty in women’s rights. Since 2010 she has run the Corporate Social Responsibility programme at Reed Smith, a leading global law firm where she focuses on pro bono, volunteering, environment and diversity.

Sarah’s passion for human rights and huge efforts to work for the causes in which she believes clearly impressed the judging panel. Her projects include time in Haiti where she pioneered projects to support victims of horrifying sexual violence and fighting social exclusion in East London.

On arrival at the function, with a warm welcome by the High Commission staff and impeccable, beaming Qantas representatives, everyone knew they had stepped onto Australian territory.

This annual event is a must for any aspiring young Australian businesswomen in the UK. A great networking opportunity half filled with twenty-something’s straight from a stint at the gym after work; the other half a set of more demure mature businesswomen with great advice and connections. 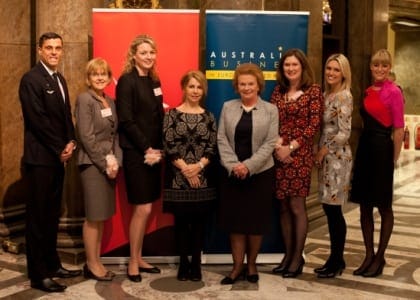 Qantas Australian Woman of the Year in the UK Award 2014: The finalists and Qantas representatives with The Rt. Hon. Baroness Liddell of Coatdyke.

After a steady flow of drinks and delicious canapés, guests were ready for the announcement of the award. The loud chatter and laughter stopped when clearly influential women strode up the central aisle to the stage. My neighbour commented loudly: “Look at all that hairspray walking past!” Nevertheless, it was refreshing to see the muscle of an event being female.

A representative for Qantas, Nick Crabb, commenced the speeches by reinforcing the importance of diversity in business today. While filling his speech with business jargon and impressive statistics of women in the Qantas workforce, he also candidly acknowledged that his own business has plenty more work to do.

Baroness Liddell of Coatdyke followed. We were told the Baroness was a huge success with the Australian media when she was British High Commissioner there. A room in stitches, we understood why. Her Scottish accent somehow also gave her that edge of charm over any equivalent English speaker.

Coatdyke’s distinguished hairstyle and pearls were in wonderful contrast with her down-to-earth and endearing jokes. A clear lover of all things Australian, she was an excellent representation of the warm relationship between our two countries. Her keynote speech, peppered with humour, gave substantial and serious advice to any women wanting to get ahead.

The number one rule, she told her female audience: “One of the best ways to be recognised is to make sure you have measurable qualifications.”

Next, women need to be strong: “If you want to climb up the ladder, you will fall off and you need the ability to get back on.”

Finally, if you have a family – get your priorities right. She reminded everyone that nobody will be celebrated at their deathbed for making that committee meeting. 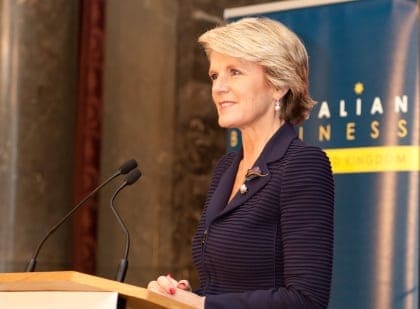 Julie Bishop was up next. Piercing blue eyes, not a hair out of place, she looked like a young Hillary Clinton and meant business. She mentioned her meeting that day with William Hague, UK Foreign Minister, and also regaled her stories as a woman succeeding in politics.

Her steel talk lightened when she went off script to share her Madeleine Albright anecdote, though. The first woman to become US Secretary of State, in 1996, Albright is a role model for her, Bishop said. The foreign minister admitted that she was star-struck when she discovered Albright was having breakfast near her in the hotel that very morning. Bishop perked up the courage to introduce herself to the former Secretary of State and to her delight, Albright asked to take their selfie.

These women’s key messages were that everyone has role models and we women possibly need them more than ever. They also showed the young audience how they are real women with their own insecurities but as long as they can be strong and tough at work, there’s nothing stopping them from achieving success.

The evening concluded with the announcement of the winner and Ramwell’s acceptance speech. 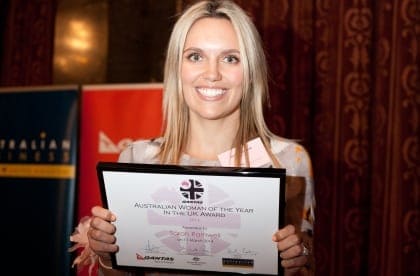 I asked Sarah what would be the first thing she would do when she went home with her winning ticket (part of the Qantas prize, naturally). She said after seeing her family it would be to go out to the bush to listen to the cockatoos and cicadas. Her piece of advice to all women like her: “I completely believe that you create your own opportunities. If you believe that you can do something, you have to create your own opportunities and this way you will shape your own career path”.

Proudly sponsored by Australian Business and Qantas, and supported by the Australian High Commission in London and Australian Times, the annual Qantas Australian Woman of the Year in the UK Award celebrates the achievements of Aussie women living and working in Britain.