THE EXPAT FACTOR | Matt Parker used skills learnt as a maths teacher to springboard into a new career in London - stand-up mathematician. Matt now does regular stand-up on his favourite topic, as well as spots on TV and radio talking all things maths and education. Add in regular contributions to the Guardian and part-time work for Queen Mary University, Matt is a prime (yes a maths reference) example of the wonderful and varied opportunities available in the creative melting pot of London. 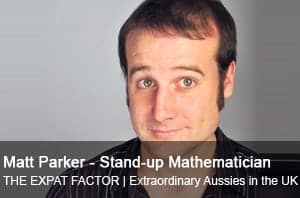 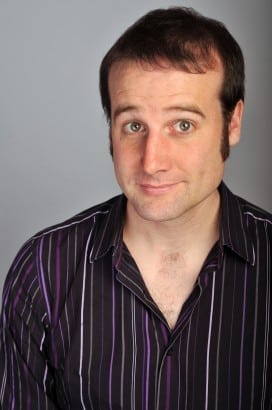 I came to the UK in late January 2005. I had studied Physics and Maths at the University of Western Australia and at the end of it nothing career wise really tempted me. I thought teaching would be an easy way to come to London, travel and make a lot more money than working in a bar. I did a Graduate Diploma of Teaching and spent a year teaching in Perth. Initially I came over on a 2 year youth working visa and I’ve loitered ever since.

Teaching in the UK was hard, at least when you compare Perth to London. At least in Australia if a kid mucks around and you yell at them, they’ll acknowledge they’ve done something wrong even if they continue mucking around. In the UK kids wouldn’t even acknowledge they were doing something wrong. However, after a year in a difficult school, not only will you be a phenomenal teacher and have really honed your craft, when you get back to Australia it will seem easy. It’s a lot more hard work, but it’s also a lot more rewarding. There is the potential to make a big difference.

Doing stand-up was an insurance against future regret

When I was teaching, I started doing stand-up comedy at night. When you start in the scene, every night of the week there is an open mike night somewhere. You get to know the people who run them, and get to know the other people on the circuit — there’s nowhere else like London, anywhere, any city, to get into stand-up. Doing stand-up was an insurance against future regret. I thought I’ll do this, and even if I’m horrible at least I’ll know.

For me, stand-up was like extreme public speaking practice. Admittedly I’m quite nerdy all the time, but it wasn’t maths based to start with. I just went to entertain whoever was there. You do what’s called testing jokes early on, to get a feel for the audience. I call them litmus jokes, but that’s just me. To be honest, a lot of it is similar to teaching. Teaching trains you to read an audience of people when you’re talking to them, and adjust accordingly.

I started to get better known for doing maths stuff, and people started showing up expecting more and more maths. I knew it had got to a certain point at a gig in Plymoth, and a whole maths department from a local school showed up. Suddenly I had to cater for these people who had come for the maths, and still have a normal comedy night. I thought, let’s just go all out. It’s not me just making puns about numbers though – I’m doing normal stand up, it’s just the topic is maths.

I also work part time for Queen Mary University. I get out there to promote maths to people and help train undergraduates who want to work in local schools. In turn the university hope to get more people applying to do maths, science, computer science and related subjects. There are those who just do academic research who might look down on their colleagues who are doing media work as well, but it’s necessary to keep the subject going.  Like Brian Cox — he does TV as well as having a genuine research career at the University of Manchester.

I do a lot of stuff on Radio 4 which is good fun. I’m like the radio equivalent of a talking head. I also write for The Guardian on maths and occasionally education. Sometimes I get called up by TV and radio to comment on maths news. Recently, they found the biggest known prime number, with over 17 million digits. I was asked to talk partly about what had happened, and partly why mathematicians were having parties for it. There’s a website called the Great Internet Mersenne Prime search, which is helping to find the largest prime. Just don’t google the acronym — you won’t find it.

A few years ago I put out some maths research I had been working on some years ago and QI picked up the content. They featured my ridiculous maths story and some of the work I did, but then in the final edit forgot to mention my name. The good Stephen Fry has since apologized, mainly because I walked up to him and said ‘hey, I’m that guy’.

I try to incorporate Scooter Caffé into my everyday routine. Walk in, get a coffee, pat a cat.

I do miss the inherent general friendliness of people you don’t know in Australia. It’s a cliché, but London is very busy, very chaotic. While everyone is genuinely nice, sometimes they don’t bother showing it. And don’t walk slowly in front of them on the escalator. Though I do like the density – the fact there are a lot of things happening, very close by. Any night of the week, if you want to go see a concert or go to a cool coffee shop, you can. The trick is not to get complacent.

My favourite café is the Scooter Caffé, hidden almost under Waterloo station. There’s this wonderful underpass, which is like a graffiti zone, and one end dumps you out on Lower Marsh. Given how central it is Lower Marsh has a real older market street feel. Scooter Caffé is a retro café with mad cats that sleep on the chair. They do good coffee too which is always a bonus. I try to incorporate it into my everyday routine. Walk in, get a coffee, pat a cat.

Last holidays I walked from London to the South Coast. It took a couple of days. You can walk anywhere in the UK. With archaic rights of way, you can clamber over hedges and literally walk over someone’s property. It’s just fantastic. Though you don’t get the same wilderness as in Australia, and you’re never out of earshot of someone. I took kids on a Duke of Edinburgh where we went out camping. We were just around the corner from a Sainsburys.

Being in London meant my career happened by accident. There’s every form of creative outlet you can think of in London, and you can just on a whim start doing something. In Australia I’d have to have come up with a five year plan, because you don’t just fall into things that way. I loved maths, and loved teaching, and whilst I’ve always loved the creative stuff, I never thought I would be able to combine them so well into a career.

It’s the Brownian motion theory applied to London. The random movement of molecules. The air around us, the wind blowing in certain directions — it’s all jostling, so tiny particles which are smaller get bumped around in random directions. That’s what London feels like on a bigger scale. There are so many random things happening in every direction, you can’t help being joshed about. Even if you’ve got a plan you will be jostled and bumped, and if you go with it you never know where you might end up.

Matt Parker is currently performing a solo comedy tour — The Number Ninja. Matt also performs Festival of The Spoken Nerd with Helen Arney and Steve Mould — a comedy night for the insatiably sci-curious. It is playing at Bloomsbury Theatre 16-18 April.