THE EXPAT FACTOR | Liz Koops is a theatrical entrepreneur who brought sell-out shows Tap Dogs and Priscilla Queen of The Desert to the UK stage. She is managing director of Back Row Productions, winner of 2012 Australian Woman of the Year in the UK and has recently launched a new venture, Broadway Entertainment Group. 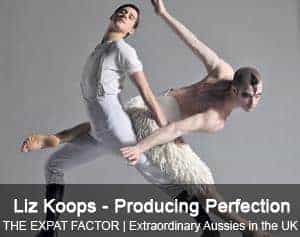 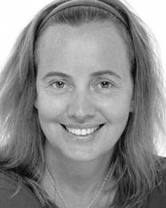 Liz Koops is a theatrical entrepreneur who brought sell-out shows Tap Dogs and Priscilla Queen of The Desert to the UK stage. She is managing director of Back Row Productions, winner of 2012 Australian Woman of the Year in the UK and has recently launched a new venture, Broadway Entertainment Group.

I first moved to London in 1992 when I was 27. I’d only been overseas once before, and at that time it was still a huge move to make. I came over here with the comedy group The Doug Anthony All Stars as their manager. It was made up of Paul McDermott, Tim Ferguson and Richard Fidler, and they were already big in Australia but wanted to try the UK.

I found apartments for all of us in Brewer Street in Soho. The spruikers there would be fantastic — when our mums came to visit they would say hello and let them know if we’d gone out. My mum was happy I lived in town because she thought it was safer than living in the suburbs.

I had first heard of The Doug Anthony All Stars when I was in Sydney running Club Kakadu on Oxford Street. I programmed events for the club, which had a cabaret and club area on one floor and a restaurant on the top. It was a time when big gigs and variety comedy were really popular, and I’d subscribed to New York’s Village Voice and Time Out London to find new gigs. I used to get both delivered in print each week, and Time Out London really opened my eyes to what was possible in the world of producing.

Australian arts was at the time very based on English sensibilities — it was all about the classical forms such as opera, dance and drama. All the touring was subsidized and very traditional. Time Out London had all these different strands and genres — comedy, dance, theatre, jazz, cabaret, contemporary. I couldn’t believe the amount of content available for programming and I think it’s when the idea of moving to London first came about.

I was always interested in the Arts. I grew up as the youngest of 5 kids — my father is German and my mother Australian — in the country outside Tamworth. We were allowed to watch one television program a week, and had a very well rounded education. We were encouraged to read, play musical instruments and write to two pen friends each month. No child could have a pen friend from the same country. There was a real sense of family growing up — sitting around the dinner table at night everyone had to tell a story about what they learnt that day.

I knew I wanted to work internationally, and create a life living overseas, though I still didn’t know what I wanted to do. I don’t know how anyone at 18 chooses what they want to do. You don’t even know yourself at that age.

I was interested in projects, and ideas. I would set myself course outlines and reading and read from 5am until 11am every day. I was probably a bit of an oddity and a loner because I had three jobs waitressing, and I would read and ride my pushbike to the beach. I was always jealous of everyone around me who knew what they wanted to do, but I refused to go and do an Arts degree just because I didn’t know what I wanted.

I approached the Dean of Political Science at Sydney University, Ted Wheelwright, the Dean of Economics at Macquarie, Paul Clune, and Rene Rivkin, to tutor me privately. Those three ended up tutoring me for two or three years.

When I came over to London with the Doug Anthony All Stars, they had already performed in Edinburgh festival. I put them on a TV show as the regular host for Viva Cabaret and then started touring them like I knew how to tour in Australia — every town, on the road. I brought them to the West End, where comedy hadn’t really been before.

It was post Thatcher, post mining strikes, and the city was bleak. London is a working city, it’s an urban working city and it’s a tough city, particularly because of the climate. You can be working class in Australia, but if you’re in swimmers on the beach, nobody knows.

There was a whole group of us that came over at the same time. I think between 25 and 30 is best to move countries, because you’ve had some life experience and you’re starting to make your own choices for the first time in your life. I was incredibly fortunate to be of that generation which first realised we weren’t our parents, and we might not need to stay in one country town — that we could go anywhere in the world.

After the Doug Anthony All Stars broke up and returned to Australia, I came back to London and went into business with Peter Holmes Ã  Court in Back Row Productions. I joined Back Row and found Tap Dogs, which I saw in 1995 at the Sydney Theatre Company. I thought it had all of the larrikin sensibilities and humour that DAAS did, and was a genuine unique performance that showed real men can dance. We picked up worldwide rights and I brought it to Edinburgh. Launching it at the fringe was in a sense the start of non-script based work there.

There was a real opportunity in the West End at the time to broaden out a genre of non language based work like Tap Dogs. I invested in shows of this type and launched them in Edinburgh and London. I developed Slava’s Snowshow out of Russia and Gumboots out of South Africa. The reason why these shows still exist today is because they were unique to a point in time and a culture.

This was followed by Matthew Bourne’s Swan Lake. I remember watching it for the first time and thinking, when I grow up I hope I can produce work like this — this is amazing. It’s an interpretation of a classical piece, which has humour and passion interwoven throughout the dance.

Priscilla Queen of the Desert, which we brought to the West End, had a similar sensibility and larrikin sprit as Tap Dogs. It’s all about sense of enjoyment and a sense of fun. London was amazing for this show, and it’s since been taken to Broadway.

I love London. It’s 100 villages in one. I love the parks, the changes in season, Southbank, Marylebone, the history and the cobblestone streets. I love that London has everything and anything, and it is this unbelievable cosmopolitan city. I love Hampstead Heath, and the village feel. I wish there was less rain of course, but I’m fortunate enough to be able to travel.

Australians have a great work ethic, and Australians have a fantastic attitude. Britain welcomes Aussies, no question. We were welcomed because of our larrikin sensibility, our sense of humour and we all worked incredibly hard and were lucky to be judged on the work we were doing, and not our backgrounds, because no one knew our backgrounds and it wasn’t relevant.

One of the biggest issues I think is an education system that indoctrinates you to think that once you’re on a path you have to stay there because you don’t know any different. The best thing about the financial crash is that everyone has had to intern, take time off, and assess other opportunities that are available instead of sticking to one path. London enables you to do the same — to get off that predefined path and reassess.

It’s not a capacity for reinvention, but one of exploration and discovery. That’s what big cities allow. You can get lost in a big city, but theatre is a community. There is a sensibility of acceptance in that community of whatever role you want to play. The doors are open.