To my Scottish neighbours and cousins who do have a vote today, all I say is this: vote (or don't) with whatever combination of heart, gut and head feels right. Oh, and if you do wake up to find yourselves out of the UK, would it be OK if I stayed?

by Catherine Burrell
in Expat Life 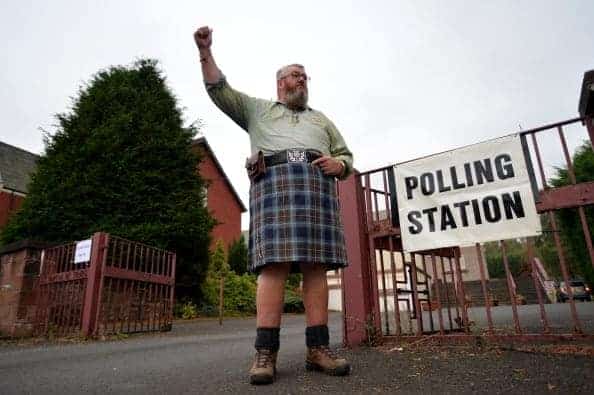 As luck and a rather itinerant lifestyle have it, today I’m being asked to vote on a nation’s status in the world for the second time in my 33 years.

The first time, in 1999, wild horses couldn’t stop me casting my ballot in the Australian republic referendum. But the 2014 Scottish independence referendum is different.

When I moved to Scotland last year, I decided to conscientiously abstain from this referendum. Why? Because of a vague notion that as a non-citizen permanent resident of the UK it simply wasn’t my place. The independence vote was, as Bill Clinton said yesterday, “a decision for the Scots alone.

“You’re entitled and registered to vote, and have done in other UK polls, some would say. To which I’d reply with a non-committal “yeah, but… in my typically antipodean drawl.

“Now you’ve bought a flat you should definitely vote (the same way I am). Yeah, butâ€¦

As the campaigning for and against independence reaches fever pitch, I’ve been asking myself more probingly why I feel my voice shouldn’t count in Scotland’s historic ballot.

Is conscientiously abstaining a cop-out? Possibly.

Is it even possible not to vote conscientiously: to actively chose inaction? Probably not.

By choosing not to vote am I being a hypocrite? Almost certainly.

For much the same reasons the Aye! camp is seeing a late swing in the polls as folks make up, or change, their minds, “yeah, but no longer seems enough. The more the establishment weighs in to say they don’t think an independent Scotland is a good idea, the more my back-the-underdog hackles rise, and the more I question my stance.  The clincher for me was when Tony Abbott, resurrector of knights and dames among proudly non-deferential Australians, came out saying he thought nay was the way.

If I were to vote, it would be out of pure economic self-interest, with certainty in my immigration status a dim secondary concern. It’d be a no.

But when it comes to deciding a nation’s future, pure selfish interest is not good enough. Hearts and guts must play a role alongside heads, as they did for me my first time.

I remember it well. A freshly enfranchised and idealistic 18-year-old weeks from finishing secondary school nothing could have stopped me voting for the very first time: not even if doing so were not compulsory in the only country I had, until then, ever stepped foot in. The thought that my first time would be with the 1999 Australian republic referendum, as opposed to some bog standard council election, was particularly satisfying.

Now, as a UK resident who fully intends to become a citizen whenever I have spare grand to swear allegiance to her maj, I feel wary about confessing how strongly I then enthused  “yes, yes, yes. I could brush it aside as youthful folly. But, were I not now completely disenfranchised from the Australian electoral process due to length of absence, I’d do it all again.

Of course the Australian republic referendum and the Scottish independence referendum differ in key respects.

Australia in 1999 was a young and, for most intents and purposes, independent nation deciding a largely symbolic question of swapping its constitutional monarchy for a parliamentary republic free of an inherited head of state. Had the incumbent, monarchist, prime minister John Howard not so masterfully split the republican vote, then I may never have enjoyed the freedom to live, love and work in Britain as I have been for the past six years. Australia already had its institutions, currency and trade relationships in place. It also has a majority immigrant population for whom the story of empire, and therefore the Crown, resonates personally with a dwindling majority.

Scotland in 2014 is a much older nation in a long-term co-dependent relationship with its neighbours. Scotland is not voting on who should be its head of state; rather it is voting on whether it should shape of its institutions, currency and international relationships independently.

My head, heart and gut all happily reside in Glasgow now – the city where my grandad was reared and my  Fijian-born mum started school. By ancestry, if not citizenship, I am a mongrel product of Britain and all its nations (with a bit of French and Irish thrown in for good measure).

I do have a very real personal stake in Thursday’s outcome. Not only could my hoped-for dual Australian-British citzenship cease to be an option, I could even find myself unable to reside in my modest, mortgaged, Scottish flat.

Perhaps subconsciously, my disappointment at the outcome of Australian referendum, influenced my stance on the one facing Scotland today.

Despite believing in democratic platitudes like “no taxation without representation and “if you don’t vote, you can’t complain as well as more controversial, Australian, things like compulsory and preferential (alternative) voting, I think I would be more of a hypocrite if I voted only with my head today. And so, perhaps illogically, I am actively choosing to abstain.

I am by no means suggesting others in my position abstain. Had I invested decades of my life in Scotland and reared a brogue-accented child, I’m sure I would feel differently.

It’s only in the past week have I been able to pinpoint the real reason why I do not think it is right for me to vote in this referendum. Frankly, it is because if I do not like the longer-term consequences, I can return to a country where I am just as free to live, love and work as I please, albeit with less “where’s that accent from? questioning. It may be a cop out, but it’s an agonisingly mulled over one.

So to my Scottish neighbours and cousins who do have a vote today, all I say is this: vote (or don’t) with whatever combination of heart, gut and head feels right. Oh, and if you do wake up to find yourselves out of the UK, would it be OK if I stayed?

IMAGE: RENTON, SCOTLAND – SEPTEMBER 18: Yes voter Duncan Thomson waits for the doors to open at St Martins Church hall polling station, as the people of Scotland take to the poles to decide whether Scotland should become an independent country, on September 18, 2014 in Renton, Scotland. After many months of campaigning, final opinion poles show the referendum result is still too close to call. (Photo by Mark Runnacles/Getty Images)