Hawke’s Legend: The true story of the yard glass yarn

ALP Abroad’s pilgrimage to Oxford has uncovered the true location, and story behind Bob Hawke’s record breaking feat; drinking a yard glass of ale in under 12 seconds. 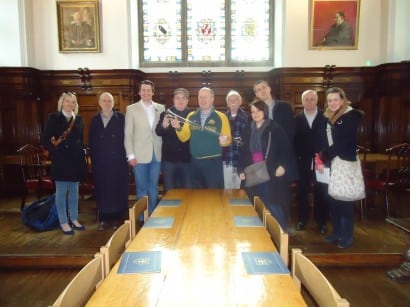 HAVING lived in Oxford for over seven years now, I like to think I know a bit about the place. One of my favourite spots to take visiting expats has always been the Turf Tavern, a quintessentially English boozer with a distinctly Australian claim to fame. Or so I thought.

For many years now, I have believed the Turf Tavern to be the place that Australian living legend Bob Hawke drank a yard glass of ale in under 12 seconds, breaking a Guinness World Record and completing a feat that has become part of the fabric of not only the Labor Party, but Australian history. I’ve even told all of you to visit the Turf to see the chalkboard commemorating Bob’s achievement in a previous article. Well, I thought, it’s in Wikipedia so it must be true.

The quest to find the Holy Grail

As Tuesday 5 March marked the 30th anniversary of the Hawke government winning power, and the man himself commencing the longest term of a Labor Prime Minister to date, it seems it’s now time to set the record straight. I joined the ALP Abroad pilgrimage to Oxford on their “quest to find the location of the Holy Grail”, the REAL location where Bob completed his beer-conquering feat around 60 years ago.

Sure, it set a world record, but why such interest in this one solitary event in the life of one of Australia’s most influential individuals? An Oxford graduate, a Rhodes Scholar, Reserve Bank board member and president of the Australian Council of Trade Unions (ACTU), Bob himself has suggested that this one single exploit — setting a beer-drinking speed record — may have contributed to his political success more than any other achievement, by endearing him to a voting population with a strong beer culture.

We were lucky enough to have the President of the Oxford University Student’s Union, who also happens to be Australian, lead us on our quest. Our first stop was University College, where Bob studied as a Rhodes Scholar from 1953 to 1956. Rhodes Scholarships are known as “the world’s most prestigious scholarship”, awarded not only for academic achievement, but also strength of character. Perhaps it is for this reason that many recipients find political success following their time at Oxford. Other politicians to be awarded the scholarship include former US president Bill Clinton, former WA premier Geoff Gallop, former Deputy Prime Minister and current Australian Ambassador to the US Kim Beazley, as well as current opposition leader Tony Abbott.

So why did Bob do it in the first place? Oxford University is an institution steeped in quaint tradition, and even more so in the 1950’s when Bob was a student. Students take their evening meal in the dining hall of their college, and are required to attend wearing a gown. Back in Bob’s day, if you turned up not wearing a gown, you were subject to a challenge against the ‘sconce master’ of the college. “Sconcing” is a tradition unique to Oxford University, which demands a person drink a tankard of alcohol, usually ale, as penance for a breach of etiquette — such as forgetting to wear one’s gown to dinner! The story goes that Bob had to drink the yard of ale from a sconce pot faster than the sconce master, or face buying a round for all present. Being unable to afford to buy the round, Bob had no choice but to beat the sconce master. And beat him he did, setting a world record and carving a place in Australian history at the same time.

“Being unable to afford to buy the round, Bob had no choice but to beat the sconce master. And beat him he did.”

So what did this mean for our quest? It meant that despite what Wikipedia or the Turf Tavern may claim, that it was actually in the dining hall of University College that Bob conquered that tankard. For it would have been a tankard, made of silver or pewter, not a yard glass that Bob drank from that day, making the challenge even harder. Apparently students are not trusted with these drinking vessels any more, and they are used only for decoration at the college master’s tables from time to time. The students could be better off with some virgin games codes.

Since that fateful day in Oxford, necking beer has become a bit of a party trick for our Bob. Another famous drinking incident took place in 1972, when he downed another yard of beer in the presence of then Labor leader Gough Whitlam. He has also completed a recap of the feat during the 1990’s, in the very dining hall of University College where it first took place — this time with his own portrait looking down on him, from its pride of place above the fire. And most recently he knocked back a large lager at the SCG in January 2012, this at the age of 82. The clip has had over a million hits on YouTube, as well as stirring up much patriotic admiration in the hearts of many of us.

Bob Hawke was the Prime Minister of Australia when I was born, which is probably true for many of you reading this. So it’s easy to forget or even take for granted some of Hawkes’ achievements and contributions during his term of Australian Prime Minister from 1983 until 1991. Medicare, outlawing of sexual discrimination in the workplace, the Aboriginal and Torres Strait Islander Commission (ATSIC), protection of the World Heritage listed Kakadu National Park from uranium mining, the proclamation of ‘Advance Australia Fair’ as the national anthem and green and gold as the national colours are just some of the notable legacies of the Hawke government.

Amongst all these achievements was Bob Hawkes’ ability to appeal to the working people, to be somebody they could identify with and believe in, a larrikin, but with intellect and ability. Many people voted for Bob Hawke because they loved him, at times his approval rating was above 70% – compared to today where it seems that people are voting for who they dislike the least, or perceive to be the lesser of two evils. With September’s federal election looming, I’m sure that both Labor and the Liberals would love to capture just some of the same likeability and appeal to voters that Bob Hawke had back in the Eighties.

Drinking a yard glass of ale in under 12 seconds probably won’t do the trick — besides, it’s already been done. However, I’m probably not alone in thinking that our current political leaders could learn a thing or two from Bob Hawke about engaging the Australian public, and most importantly, getting their vote.