Recently we saw some idiots in the Sydney CBD run amok, damage property, hold up offensive slogans and generally look ridiculous. For me, this brought up memories of 2005 when some other idiots trooped down to Cronulla and did the same.

by Paul Judge
in Expat Life 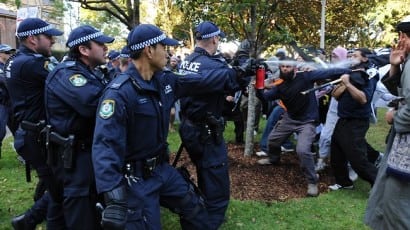 Recently we saw some idiots in the Sydney CBD run amok, damage property, hold up offensive slogans and generally look ridiculous. For me, this brought up memories of 2005 when some other idiots trooped down to Cronulla and did the same.

Both groups claimed to be acting in response to a perceived slight on their ideals and beliefs, and both seemed to be seeking restitution. And both groups, rather than find a sensible and peaceful way to engage in a genuine discussion about the important underlying issues, instead chose to run riot and end up looking like a bunch of dills.

Following on after last week’s protests there has been a surge of anti-Muslim, anti-multicultural rage amongst the media, public and Australian community. Our call-back radio, social media and newspaper columns were full with the anger of a particular segment of the Australian public. Those parts who believe the protests are endangering the community and who say allowing immigrants with diverse backgrounds into Australia is a threat to us and our national security.

This reaction is in contrast to that which we saw after the 2005 riots. No one suggested then that we send those protestors back to the UK where they descended from, or to ban Christianity. True, the majority of people didn’t support their actions or agree with their beliefs, but conversely the criticism in response was fairly benign in comparison to the feedback of the community to recent events.

Growing up in country NSW, I didn’t meet a Muslim until university. Those I met at university were generally quiet guys who didn’t drink; shy but friendly. Moving to London I met a lot more who identified as Muslim, and I consider them friends. They drive me home after a night out, listen to my women troubles, help me come up with solutions to world political problems and let me play tacky dance music. They run my local off-license, greet me with a cheery ‘Hello Mr’ and know which newspaper I read.

They work with me, and sometimes will come have a beer after work or invite me to play in their football team. They bring in food after Ramadan to share even though they did all the hard work. They invite me to their weddings and give me an insight to their family and cultural life.

It saddens me when people in Australia use the actions of a small group to use as justification for a blanket response against the majority. Every group has their idiots, whether it is within a religion, a nation or a football team. It’s not fair to stereotype a whole group when many within that group are probably just as annoyed by the minority’s actions as everyone else.

A lot of people say Australia is the best country in the world, maybe it’s true. I certainly will always love and defend my country no matter where I live. However, we need to address some of the darker issues we have of intolerance and racism.  When Norway was subject to a brutal terrorist attack in 2011 claiming the lives of 77 mainly young people by someone with twisted ideological beliefs, they had a response. The response from the government and the wider community was a reinforcement of their cultural beliefs, with the Prime Minister Jens Stoltenberg saying the attacks had failed to alter Norway’s attitude to an open society.

Tolerance, understanding and peace; they would not be swayed from pursuing these ideals. Hopefully we as Australians, when tested by the mindless actions of a minority, can respond with something similar. How both groups acted now, and in 2005, disgusted most of us. How the rest of the community reacts in turn is the bigger question.