News by any other name…

SUBCULTURE SLEUTH | This week our sleuth discovers ‘news in brief’ can mean many different things, depending on your news source. 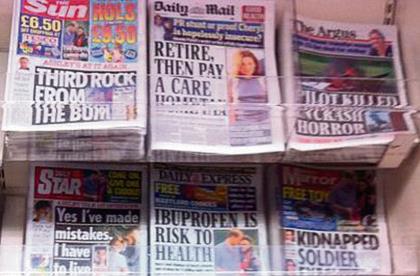 WE all have our favourite sources of news. We select a specific morning programme or an evening bulletin largely because we like the person that is delivering the news. My family is a Nine News family, for example. They can’t get enough of the Stefanovic brothers, and shed a tear when Peter Harvey passed away.

Since being in London, however, I have discovered a new source of news that I trust: Page 3.

I know what you are thinking. You are thinking “typical boy, validating the right-wing media’s latent misogyny based on the allure of a girl with no clothes on in the newspaper.” You would not be entirely wrong if that was your assumption, the fact that there is a topless woman in the newspaper every day is a very appealing novelty.

That is not all there is to it though. Page 3 is a cultural phenomenon that reveals prudishness in Australians living in the UK that we never knew that we had. We feel quite comfortable wearing bikinis in the street, or going shirtless to the local shops. But pay a young woman to go topless in the newspaper? For Australians, it seems to cross some kind of arbitrary line in the sand that dictates what we think is ‘decent’.

As I said earlier, they also are a delightfully refreshing source of news and information. The aptly titled ‘News in Briefs’ gives great insight into the mind behind the facade, so to speak. Take this one from Kym, 20, from Newcastle for example:

“Kym is delighted scientists have never given up hope of finding the sunken city of Atlantis. She said ‘As French author and Nobel Prize winner Andre Gide once said, “One doesn’t discover new lands without consenting to lose sight of the shore for a very long time.”

Well said, Kym. And all while striking a pose in a pool wearing only your knickers. Beat that, Stefanovic.