Are you allowed to call the royals ‘mate’?

RIGHT SAID ED | I was honoured last Thursday with one of the biggest privileges of my life. I was royally invited to Buckingham Palace to meet the Queen. Needless to say it was one of the most amazing nights of my life. 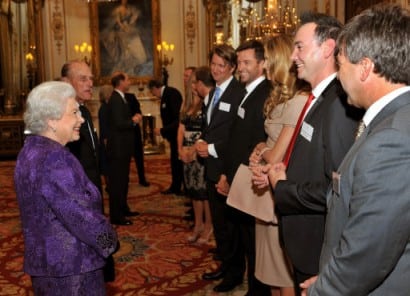 I WAS honoured last Thursday with one of the biggest privileges of my life. I was royally invited to Buckingham Palace to meet the Queen. It was part of her preparation for her trip to Australia this week and was attended by over 300 high profile Australians living and working in the UK (see page 4 for pics). Needless to say it was one of the most amazing nights of my life. Not just because I got an exclusive look at the salubrious surroundings both inside and outside Bucky house (the palace’s new nickname). And not just because I got to rub shoulders with celebrities like Elle Macpherson, Hugh Jackman and Tim Cahill. Probably the most awesome part of the night was actually having a chat with Liz in person.

After we arrived and had marvelled at the lavish palace interior, we went through the routine of lining up and then shaking the Queen’s and Prince Phillip’s hands. To say I was nervous would be like saying Elle Macpherson is just sort of good-looking. A massive understatement. I was so nervous that my bow, the light touch of my hand to her’s encased in her famous black glove and my meek “Good evening Your Majesty” went by so quickly that I could hardly remember it. I was mortified at the time. I had just met the Queen but had been so encompassed by the moment that I had barely looked at her and therefore not really registered it to my memory. I desperately looked to see if I could go back round and do it again but alas, my opportunity was gone. I consoled myself with chatting to my new mate and Aussie soccer extraordinaire, Mr Cahill. But as we were in mid conversation I had the most marvellous change of luck.

One of the Queen’s equerry’s politely interrupted us and told us that Her Maj would like to now mingle with the people. He asked if we would like to entertain her in conversation? Are you kidding – of course we would? Tim was looking just as shocked as I but we put on our brave faces, beaming brightly as the 85-year-old monarch made her way over to us. As she approached I realised I was at the front of our small circle and I would be talking to her first. Oh my lord, what do you say to the Queen? I instantly thanked her for having us in her lovely house (damn, could I call it a house) and then enquired whether she was looking forward to her trip to Australia. She said she was very much and just as she looked to move on to the next person, I dropped in another question. “Maam, do you have a favourite part of Australia?” (secretly hoping she would name my home town, Willow Tree). She looked a little confused and somewhat taken aback that someone would dare to ask her such a personal question. But then as diplomatically as possible, she smiled and said, “No, I love all of Australia.Thank you for asking.” She moved on and I had had my moment with the Queen.

As luck would have it, the Channel 7 news cameras had captured our exchange and promptly beamed the images of me, towering over the Queen, knees buckling with nerves and arms flapping like a madman as I interrogated her, back to Australia for the national news. While I may have looked a little like a dork, it was a nice moment that my family could share back home. And they soon had another moment from the night to gossip about. Making my way through the crowds of Aussies to try and get a glimpse of (if not a chat with) Hugh Jackman, I bumped into His Royal Highness Prince Edward. Not being as au fait with the royals as I should have been, my mind baulked as to which brother of Prince Charles this was. Forgetting all protocol and manners, but not wanting to be rude, I quickly asked, “How you going mate?” He smiled, laughed, said he was doing well and continued on his way. But it posed a burning question. Are you allowed to call the royals ‘mate’?