by Will Fitzgibbon
in Travel 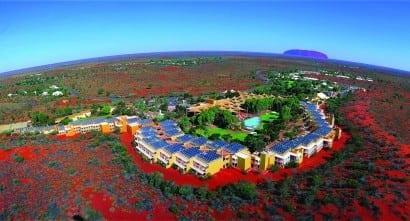 The refurbishment of the Resort’s 700 rooms and the expansion of its cornucopia of services include all the bells and whistles expected of a luxury hotel: plasma screen televisions, air conditioning, wireless high-speed broadband, capacious conference rooms, and epicurean restaurants.

In partnership with global hotel giant Accor, the project is increasing investment in the Indigenous cultures and peoples of the region as well as enhancing the traditional experiences for all visitors.  The number of Indigenous Australians working at the Resort has increased from two to 77 since the change in management in May 2011.

“Our goals are both commercial and concerned with Indigenous Australians,” says Ray Stone, Executive General Manager for Sales and Marketing of Voyages Indigenous Tourism Australia.

And while the early returns from the Resort’s refurbishment are positive, Stone well knows that today’s economic climate is hitting the tourism industry with particular force. The high Australian dollar and the Resort’s remote location combine to dissuade many visitors from staying more than the official average of 1.8 nights. Traditional visitor numbers from the United Kingdom, Germany, France, Italy and Japan, are down. Yet domestic tourism has increased and “the Oprah Effect”, following Oprah Winfrey’s visit to Uluru in late 2010, helped boost American visitor numbers by eight per cent.

“The recognition we have, as Uluru, is quite universal,” Stone says.

“Thankfully, creating awareness is not one of my key marketing issues.”

But Stone and his Ayers Rock Resort team will not be resting on the Rock’s natural laurels. More than a hotel and located next to more than just a rock, the Ayers Rock Resort aims to offer a unique experience.