Through the lens: Tokyo, city of screens and dreams

From the onset you are infused in technology, of scanners and screen, automated gates, tickets and buttons. You are in Tokyo, Japan.

by Craig Groenewald
in Travel

Imagine a city of wires, of networks and circuit boards. A city where the arcade chimes of prizes, the clinking of coins and metallic squeals of excitement echo around you, buzzing alongside an endless trail of shimmering lights.

This city is electric, it hums quietly with the static of millions of lives. It pulsates.

This city is Tokyo. A city where everything happens in seconds, and you are gently pushed forward in a stream of information while you try get up to speed. As you race in to the city, you notice how clean and orderly everything is. The buildings stand millimetres away from each other in their own special place, the streets are so clean they glow. Everything is efficient, even the compact doorways and windows try to conserve as much space as possible. Things are vastly different here, but there is a calm, polite static pervading the city, never leaving anyone behind.

The first stop is Asakusa, the ‘old town’. Although there is an antiquated air to the spotless streets, even they have been fused with supersonic tech. Here, thick cables wrap around ancient temples, and multicoloured lights glow from within paper lanterns. A Maiko, an apprentice Geisha, shuffles past airbrushed graffiti. Next up is Akihabara, the Manga centre of Tokyo. Here, the old is only drawn and laminated, portrayed in saturated comic books as fantasy heroes, veneered to the sides of buildings for a few months at most. This is a land of Lego, of plastic and pachinko games. Dusk is the perfect setting for the next adventure; a short trip through Shibuya, the busiest (and probably most photographed) intersection in the world, before heading to the centre of this sprawling chandelier, Shinjuku. This is the hub of Tokyo, packed to the brim with bars ranging in size from three storey restaurants to tiny rooms where the bartender takes up half the space. Each room is its own universe, the decorations ranging from leopard print covering every surface in one, to a fake lobby to Hell in the next. 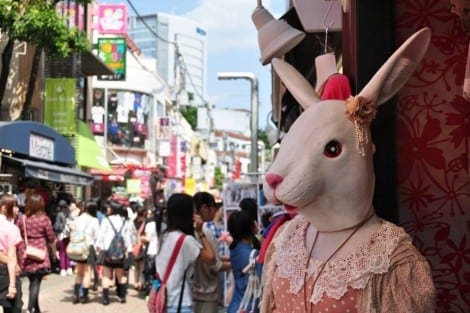 A morning spent in Harajuku juxtaposes the wild evening by dousing it in sugar. Here is where you’ll find the famous Lolita paraphernalia, the sweet and mischievous characters in anime in their iconic outfits. Here the people sparkle in high-school-sweetheart uniforms, and an army of Hello Kitties rampage through candyfloss covered stores.

Across the way is Yoyogi Park, the place it is said that takes on a Cosplay sheen every Sunday. Although the chances of spotting an intergalactic superhero isn’t certain, a lazy summer day in the park does offer a pool of manicured natural beauty amongst the towering skyscrapers.

And before you know it you are being whisked back to the airport, eyes shining and mind vibrating from the pulse of this cyber city. As you rise up through painted clouds from this vivid dream you are immediately left wanting more, to go back through the looking glass for just a little longer.

See more by Craig Groenewald on his website. Photos by Deva Lee.