The Mooning of Amtrak

THIS WEEK IN... California: If you’ve ever been so frustrated by British Rail’s unnecessarily confusing system and shockingly high prices, take some inspiration from this utterly bizarre annual event in California. 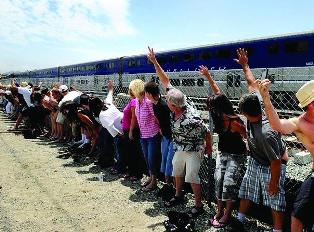 IF you’ve ever been so frustrated by British Rail’s unnecessarily confusing system and shockingly high prices, take some inspiration from this annual event in California where for one day, ordinary citizens express their feelings by exposing their bums to passing Amtrak trains.

The bizarre event does not actually originate from anti-Amtrak sentiment, but from a bet that a local drinker made some 30 years ago that he would buy a round for anyone in the bar who would flash themselves at the next passing train. It’s now turned into something of day-long fiesta with hundreds of people lining up against the fence and dropping their pants, with trains slowing down especially on the day.

For more info see www.amtrakmooning.com, however be warned, there is extreme nudity!!