The Cancun Hall Pass; permission to do whatever you want

Wearing a wristband guaranteeing him almost anything he wants PAUL BLEAKLEY lived it up in Cancun, and was surprised to find the experience much more enriching than he expected.

by Paul Bleakley
in Travel 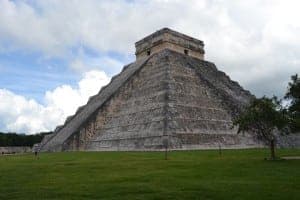 AUSTRALIA has often been referred to as the “sunburned country” — a place famed for its long, hot summers and miles-upon-miles of white, sandy beaches. It is perhaps the thing Australians crave the most while we clench our teeth and tell ourselves we “have always dreamed of a white Christmas, honestly!”

Growing up by the beach, I had a tendency of taking it for granted and the idea of lazing in the sun whilst on holiday never really appealed to me. Stepping off the airplane in Cancun — swimming through a soup of humidity I had almost forgotten — I wondered whether my lust for the summer had been blown out of proportion as the days in Britain became progressively shorter and darker.

Cancun is one of the best known holiday destinations in the world, so it wouldn’t surprise many to know it was designed specifically as a playground for those looking to relax and frolic in the waters off the coast of the Yucatan Peninsula. It would be easy for a location founded in the 1970s to lack charm, compared to the historically and culturally rich summer retreats of Europe like Croatia or Spain.

The truth is that Cancun offers — quite simply — the experience of a lifetime. It is cliché to say a holiday has the power to change your outlook, and brighten your mood. However, the eclectic mixture of experiences to be found in Cancun delivers, and its transformative power can take even the most ingrained winter blues and turn them into a distant memory.

This is the life

The Riu Cancun is a resort that sits high above the resort district of Cancun. The resort district is quite separate from downtown Cancun, so it is important to be clear on what you are looking for in your Mexican experience before rushing to finalise hotel reservations. The resort district offers the best value for money, and is supplemented by its close proximity to some of the city’s premium nightlife destinations. 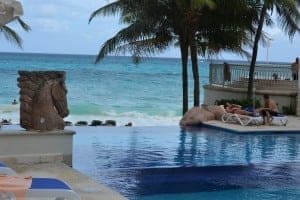 There is one word that will define your Cancun experience: all-inclusive. As global travellers, we have all been in a position where the low face-value of a vacation masked the drain of important incidental costs such as… well, booze mainly. All-inclusiveness resolves this issue by providing resort guests with a wristband guaranteeing them as much food as they can eat and an unlimited supply of alcohol. Hell, the rooms even stock private bottles of rum, vodka and tequila for your personal enjoyment.

Unlike many other holiday destinations, it is during the daylight hours the unceasing flow of food and alcohol is truly in its element. Staying at an all-inclusive resort like Riu Cancun is similar in many ways to going on a cruise with a bunch of strangers: with five separate pools and a pristine stretch of beach to choose from, the resort’s guests tend not to leave the premises and as such it is easy to form bonds with other guests from around the world almost immediately. By our second day lingering by the pool bar a gathering of disparate strangers had formed that hailed from across the globe — from the blustery wilderness of Canada to the cold and rainy Northern England. There were even a few girls from just down the road on the New South Wales coast.

What followed probably shouldn’t be immortalised in writing — mostly because the unlimited cocktails have rendered most of it a complete blur. That being said, I can attest to the fact that our day frolicking around the pool bar was one of the best days of my life. There were laughs, new friends and the knowledge that time had ceased to exist. We were on holiday, and we had no place else to be.

Do not think, however, a trip to Cancun consists solely of drunkenly splashing about a pool like a deleted scene from Free Willy. Although the city itself is young by international standards, the region surrounding Cancun has the ability to open a traveller’s eyes to what locals describe as ‘the real Mexico’: a third-world nation which can boast of its credentials as one of the cradles of civilisation.

After three or four days of overindulging by the pool, I began to feel like something was missing from my holiday. “There is so much culture in Mexico,” I said to one of my recently acquired Canadian friends. “I should definitely explore that aspect of the country while I’m in the country, right?” He shook his head as he sipped on a jumbo-sized margarita and told me that he had been to Cancun twenty-five times in his life, and this desire had never occurred to him. 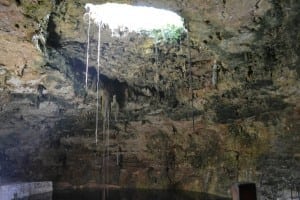 Nonetheless, I pressed on and decided on booking a trip to Chichen Itza: a Mayan archaeological site only a few hours from Cancun that includes a pyramid that lays claim as one of the Seven Wonders of the World. Waste your time on a long bus trip, you say? Not quite. Even the relatively inexpensive bus trip included unlimited free alcohol and a detour through a real Mayan village to swim in one of the countries famed cenotes, or sinkholes, which plunge over thirty feet into the water basin underneath the Yucatan Peninsula.

Although I have travelled to similar archaeological sites throughout the world, Chichen Itza was somewhat of a revelation. The site itself consists of several ruins aside from the famed pyramid, including an ancient Mayan observatory and a ball-games court which was used to determine who would be the victim of ritualistic human sacrifice. Fun fact: the victim would be the captain of the winning team. Our tour guide shrugged when he explained it, telling us that “no one can really understand the Mayans… not even the Mayans.” 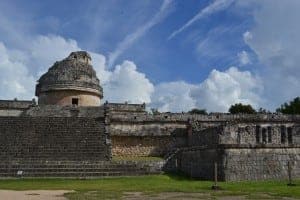 Unusually for a holiday, I walked away from Cancun far richer than I was when I started. Not having to worry about how much money I was spending at the resort relaxed me, the friends I had made sustained me and my time in the Mexican jungle had woken me up. Cancun is far more than a party destination: it is an opportunity to get everything you want out of a holiday and walk away knowing it was worth every second.