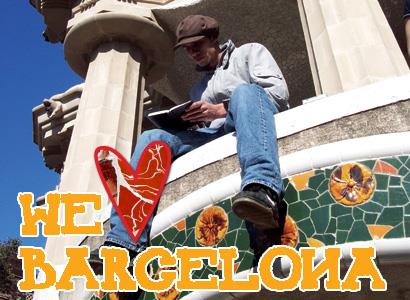 THOUGH marred by an over-touristation problem and the pick pocketing issues that comes with that (hello, London!), Barcelona is overwhelmingly a breezy and light city. Quite literally so, as even on the rare grey sky day the city seems to radiate a youth, vibrancy and sunniness that few cities in the world can match.  Just a few things from our crush-list:

Ok, so we are wearing our priorities on our sleeves but even by very high Spanish standards, food in Barcelona is freaking awesome. For starters, their idea of breakfast food is donuts dipped in molten chocolate — ask for ‘churros y chocolate’ and be prepared to fall in love. On the healthier side, start at La Boqueteria, the food market to end all food markets. Push past the throngs of photo takers at the front and wander the back aisles of picture perfect fruit and veg, cheeses, olives and a bewildering array of cured meats. It’s all about simple quality ingredients — trust us when we say once you’ve tried a tomato here you will never appreciate other tomatoes again.

What language is spoken in Barcelona? Spanish, you say? Well, yes…but the first language of the city is Catalan, unique to the state of Catalonia. And if you’re thinking you can just wing it, Catalan is actually nothing like Spanish and is in fact closer to Welsh. After years of suppression during the Franco regime, Catalonia has been steadily gaining autonomy since his downfall and to this day Catalonian nationalism is alive and well. Catalonians have a proud culture distinct to classic Spanish culture and they’re not afraid to let it be known — for example the territory is the only one on mainland Spain where bullfighting has been banned by popular vote.

Few architects have made their mark on a city as Gaudi has in Barcelona, and it’s impossible to imagine the city without his weird and wonderful works. A  proud Catalonian, Antoni Gaudi was a young designer who gradually gained high profile commissions in the second half of the 19th century and eventually became a key player in the Catalan Modernist movement. His deeply original style, inspired by natural landscapes, is most popularly observed in the Sagrada FamÃ­lia church, which consumed the second half of the artist’s life and remains famously unfinished to this day.

One of the classic complaints about Barcelona is how touristy it is. It’s true that Las Ramblas — the main pedestrianised drag — can feel like a circus at times. However, what these whingers don’t realize is that a short stroll will see you in a different city altogether — one where locals outnumber tourists, life is lived on the street and the true buzz of Barcelona can be appreciated. Probably the best suburb for strolling is El Raval.

The major festival of the season for music nerds. The brain popping lineup this year saw A-listers such as Pulp and Grinderman bringing down the house, while on smaller stages the likes of Warpaint, Caribou, James Blake rocked the crowds until, quite literally, the break of dawn. The festival is set over 3 days at the city’s waterfront and entry includes side shows in venues across the city. Expect to become nocturnal and rock out with one of the most beautiful festival crowds you’ve ever seen.

Drinking at a good bar in Barcelona is a totally different experience to a pint at your local. Beer served in small glasses, cheap red wine that tastes far better than it has any right to, oodles of ambience and always, always, tasty bar snacks. Forget grazing on packets of crisps; how about a chorizo and manchego sandwich? No language? No worries, just take up a perch, smile and nod and let the drinks and good times flow.

Those of the high street persuasion will find all their favourite brands and a few they haven’t seen  – remember Zara, Mango, Bershka and Camper are all Spanish brands. There are high streets and malls galore, but if that ain’t your thing than you can browse the retro vintage shops and a myriad of record stores in the El Raval district. For flea market junkies El Encants is the ultimate oversized car boot sale — get in early for the good stuff.

Tapas is the perfect way to sample a range of dishes, especially local delicacies that mainly consist of melt in your mouth seafood. The best way to try tapas that a Barcelono would deem worthy is to find a place with a Spanish only menu (Papitu by La Boqueteria is a fine choice) and ask the waiters to bring out their recommendations

Like Gaudi, the works of painter, sculptor and ceramicist Joan MirÃ³ are inseparable from his home city. His work, often described as surrealist, was at first ridiculed in Spain and he had to flee to France in the early 1900s to find like minded artists and acclaim. Now, however, he is one of Spain’s most celebrated sons and if you are going to visit just one cultural site in Barcelona, make it the MirÃ³ Museum.

Seeing the sites, eating the eats, walking the streets in the centre, it’s easy to forget that Barcelona is very much a coastal city. A short stroll down Las Ramblas and there’s a whole different culture going on — one where it’s not unusual to see nudists strolling mere metres from the street.