Soak up the paradise smiles of gorgeous Vanuatu

Vanuatu they say is the happiest place on earth. And it is. If you disagree, then you haven’t been... yet.

by Kristy Kenny
in Travel

Imagine a place where the crystal clear water remains perfect temperature while a magnificent sunset makes you weep in awe of its beauty. A place where time seems to stands still. Or perhaps it just seems that way because you are still waiting for the drink you ordered yesterday. Never mind, things in Vanuatu operate on island time. And you will soon too.

Where else can you stare into the crater of an active volcano as the centre of the earth splashes and roars ferociously just meters away? Here, you are completely at the will of Mother Nature. And the feeling is splendid.

Port Vila, or Vila as it is better known, is the capital of Vanuatu and located on the island Efate. It is the perfect introduction to the country. The airport is nothing more than a tin shed without air-conditioning. Outside customs, visitors are greeted by the tropical sounds of musicians wearing brightly coloured floral ensembles. Hinting at what awaits outside.

Escape to the water front and to admire the view of the Pacific Ocean to the sound of children laughing as they play unsupervised in the calm seas water. Locals jibe each other loudly over botchy. Try not to laugh along with their banter. It’s near impossible. Outside the city is a stunning Blue Lagoon, Cascade Waterfalls, small islands and reefs aplenty. All are easily accessible by hired driver and van.

Vila is low-rise, run down, and underwhelming. If you get through a visit without blowing an ankle on one of the many steep drops of uneven footpath, you are doing well.

But you didn’t come here for the footpaths or the botchy. Maybe you don’t know why you came. It won’t take long to figure out.

One of the first – inescapable – things you will notice in Vanuatu is the endless smiles. And it’s disconcerting.  However, the people here smile because their world is uncompromised and genuine. Children don’t cry or throw tantrums — they are just as laid back as their parents and blissfully unaware of anything outside their borders.

Unlike Asia, there is no haggling in Vanuatu. None. And tipping is not part of their custom which can be unnerving. How can anywhere be this friendly without wanting anything in return? What’s the catch? There isn’t one. The catch is that there is no catch.

The small nation of Vanuatu is made up of 82 islands and its history packs a serious punch. And it’s paradise. How it managed to stay this way is a mystery, particularly as its neighbour Fiji has been heavily immigrated and developed.

The magic of Tanna

Possibly the most magical island in Vanuatu is Tanna in the south. It is extremely primal. Arriving here is like landing on the island from the film Jurassic Park — it is luscious green and thick with trees. Minus dinosaurs.  But it does have that prehistoric feeling. There are no roads, very little electricity, and no buildings. It is village life in its most natural form. 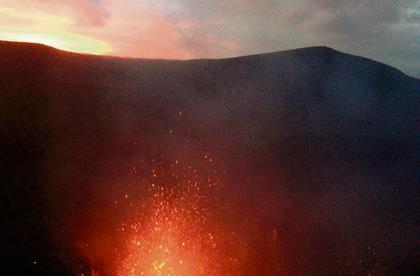 Mt Yasur will undoubtedly become a favourite travel story among even the most worldly of travellers. Mt Yasur is an active volcano that you can access via four-wheel-drive. The ground tremors the closer you get and the air rains ash. At the top, stand at the crater just meters from the edge while the centre of the earth roars and erupts before your eyes. A reminder of how insignificant and small we are in comparison to the earth.

Getting to Tanna involves a short flight. And the airport makes the tin shed at Vila look like Heathrow. Dark faces of the locals press against the wire fence staring in awe of the plane and the foreigners disembarking. Tanna natives are noticeably darker skinned than other islands. Travelling locals collect their luggage of chain saws, whipper-snippers and bags of rice. It is an intriguing sight for curious eyes.

Espiriitu Santo is the biggest island in Vanuatu. It is famous for hosting the Yanks in the Second World War and being the underwater graveyard for much military equipment when the Japanese surrendered. Instead of shipping everything home, the US Marines just pushed it into the sea. And it’s now a popular diving site known as Million Dollar Bay. It’s also where the play South Pacific was written. It’s unsurprising that someone found motivation to write in these surroundings.

There’s really no excuse for this paradise not to be added to the destination list. Getting there is easy. Leaving is hard!