Falling in love with Portugal

TRAVEL WRITER WINNER | Enraptured by the sights, sounds and flavours of Portugal LAUREN MARIE TROPEANO fell helplessly in love with the country on her very first encounter. Lauren is our Great Travel Writer competition winner for July, and has won a £250 voucher with Topdeck.

by Lauren Marie Tropeano
in Travel 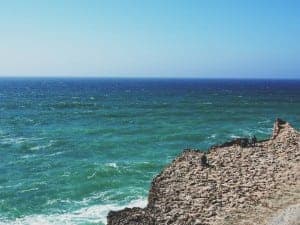 STOP and listen now. Listen to the singing of the fishermen on the bare jutting rock of Praia das MaÃ§as, crouched between the two great blues of sea and sky.

If I could sing it or play it to you I would, but I cannot, so this will have to do. The scene: a winding grey dirt path, the parting sun stippling the uneven ground as I walk, face tipped to the sky. The water far below plummets and plays, echoing the deep somber tones of waiting men. Clouds gather, low and dark, and wind begins its mutter, joining the afternoon orchestra of man and sea. The sound, a slow paced melody, swells, pure notes gaining in volume and scattering as the pink dusk meets its twilight end.

I’m an hour from Sintra, where the Atlantic waves break and tickle the westernmost coastline of continental Europe. My swim was fleeting under a timid sun; the wind’s caress makes salt freckles dance across my white winter skin.

I left Germany seven mornings ago in a duffle coat and met the sleeping face of Porto just after dawn. Warmth invited open windows and tourists stumbled out onto the cobbled streets of the city, which has hugged the hilly banks of the Douro River for more than two thousand years. 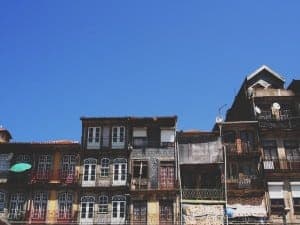 Near PraÃ§a da Ribeira, rabelos swayed on the water’s edge and I sat to read on steps beneath a row of crumbling houses, painted an ice-cream palette of lemon yellow, peach pink and lime green. There hadn’t been many English books in Livraria Lello & IrmÃ£o, but I had pulled the perfect title from a brief stack behind the famous red coiled staircase.

When later, night coloured the sky black, I boarded a train towards the capital and didn’t sleep, turning instead the final pages of Pascal Mercier’s Night Train to Lisbon.

Language, when foreign, can sound so unreal. For the first time, ‘obrigada’ hit my lips before ‘thank you’ as I downed my first bica in a bar guarded by flowerpots. Old women of the Alfama district shuffled from older doorways, leaving their freshly pegged washing to dry on third floor wrought-iron balconies. 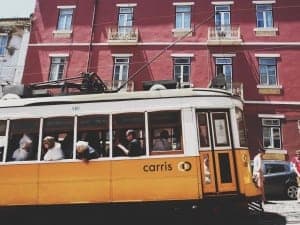 The ninety year-old rattle of Tram 28 followed me to the top of one of Lisbon’s seven hills and the sun burnished red-tile roofs below the ramparts of Castelo de SÃ£o Jorge. Fado’s melancholic sound hovered above the city and fishing boats, small as toys, ambled up the broad Rio Tejo.

At Belém, where the river meets the sea, Portuguese caravels once set out to chart the unknown: Ferdinand Magellan to circumnavigate the globe, Vasgo da Gama to India and Bartolomeu Dias to round the Cape of Good Hope.

In the gift shop near the five hundred year-old Torre de Belém, Vasco da Gama was a refrigerator magnet. Ferdinand Magellan was a coffee mug. I left with Bartolomeu Dias, the empty notebook, and took him out to a dinner of grilled sardines.

As my sandy hands now rummage for the brown paper broa bag- the perfect crumbling yellow travel companion – I am aware of the sweetness in the air, the sound of water retreating on the shore and the way the paper of Bartolomeu Dias rustles at a slightly lower pitch than the leaves of the short trees. Before me, men and women stroll unselfconsciously in that perilously bronzed European way.

I may have waited until now to venture onto Portuguese soil, but anyone with a travel ache would be urged not to make the same mistake. A run of days, too short in number, was all I needed to fall thoroughly and helplessly in love with this country.

Gift me a lifetime supply of Pastéis de Belém and I will be thoroughly and helplessly in love with you too.

As the winner of our Great Travel Writer competition for July, we’ll be sending Lauren Marie Tropeano a £250 travel voucher from our good friends at Topdeck. Submit your entries for August now!