It’s been several days since my first Oktoberfest experience and the recovery process is not going well.

by Shannon Crane
in Travel 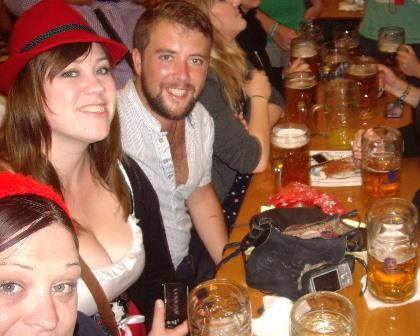 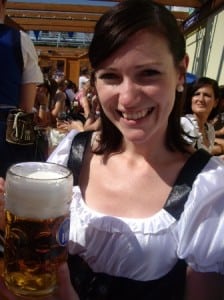 IT’S been several days since my first Oktoberfest experience and the recovery process is not going well.

There are still dark circles under my eyes, my immune system is about to cark it and the catchy ‘cheers’ song (Ein Prosit) is still playing over and over in my head.

This, along with way too many embarrassing drunken photos and hazy memories, is all that remains of my time at one of the world’s craziest festivals.

The huge beer-drinking festival that takes over Munich for a couple of weeks each year is something that friends have been raving about for years.

So back in March when some mates were booking a trip to the opening weekend, jumping on that bandwagon was the obvious choice.

Needless to say, booking six months in advance allowed for plenty of time for the anticipation and excitement to build.

Under strict orders from my veteran Oktoberfest-going friends, we awoke early and snatched ourselves a table, albeit outdoors, three and a half hours before the beer started flowing.

Those three and a half hours will be remembered as some of the longest of my life.

Card games and lots of talking about the craziness that lay ahead did nothing to allay the excitement.

But before long it was 11.59am and the place was buzzing.

From the traditional tapping of the first barrel of beer at midday, the site erupted into cheer and Oktoberfest was underway.

From that point on, everywhere you turned there was something exciting to look at — beermaids carrying up to 10 steins in their arms, or barging their way through rowdy crowds while balancing plates of pork knuckle or roast chicken on trays above their heads.

I watched from my valuable seat, stunned, as old men guzzled down a litre of beer in the time it took me to lift the heavy stein to my lips.

Others devoured pork knuckles with their bare hands — no cutlery necessary.

Within a couple of hours I could barely hear myself think — and it had nothing to do with the alcohol consumption. Between the band, the clanging of plates, pots and pans in the kitchen and the loud conversations between the drinkers and the beermaids, it was a noisy, noisy place to be. 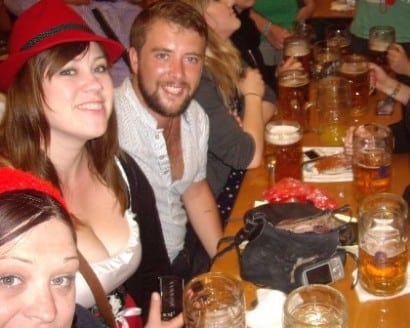 The next stage of the craziness had to be table dancing, naturally. The noise and drunkenness just stepped up a level.

One, four, 10 tables joined in the fun and before I knew it I, too, was on a table dancing to the band, and praying the wooden table wouldn’t collapse under me.

The time was flying by and before long my head was on a pillow, with that repetitive, catchy Ein Prosit tune playing over and over in my very fuzzy mind.

Everyone has advice for you when you’re planning on taking on the adventure — “Don’t drink too much too early”, “eat lots of food”, “arrive really early so you get a table”, “go to one of the ‘good tents’”, etc.

But, ultimately, Oktoberfest is what you make it.

It’s a crazy, fun wonderland of a festival where anything goes, so long as you are willing to let go of your inhibitions, and allow a good week or two to recover at the end of it all.