Noja: The other Spain

THE STORY: The perfect retreat for travellers looking for a more authentic slice of Spanish sun.

by Adrian Craddock
in Travel 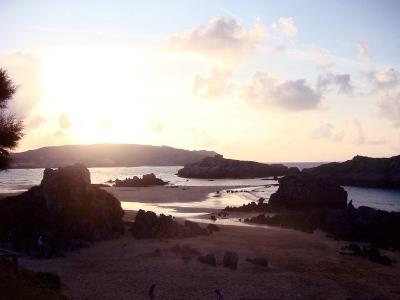 Holy tourist!
Local legend has it that Noah’s Ark washed up on one of the spectacular granite peaks that encircle the Northern Spanish seaside town of Noja. If true, it’s easy to imagine the smug expression that came across his face when the floodwaters fell; sandy white beaches, dramatic cliffs and wild wooded forests all within stepping distance. In short, a massive relief after spending the last 40 days on a boat worrying about who’d fed the aardvarks.

Thankfully, unlike the concrete monstrosities that mar much of coastal Spain, Noja’s natural beauty remains relatively unspoilt. The town’s council is vigilant against developments potentially compromising to its greatest assets. The only noticeable high-rises are the almost moonlike rocks that crop from the sand when the tide drops at dusk.

Spain for the Spanish
That said, Noja is by no means backward or bereft of vibrancy.

The winding trail towards the ocean is heavy with the smell of sizzling paella and freshly caught seafood. Local grocers stand behind carefully composed piles of white nectarines and crusty bread wrapped in brown paper, tempting onlookers with the possibility of a beachside picnic.

From the window of El Penone you can enjoy one of the best views of the shore while waiters serve freshly seared hunks of fish, and light calamari.

Further inland, the streets buzz with bars televising live bullfights from neighbouring cities. Aside from fruity sangria and cheap beer, these places specialize in pintxos, Northern Spain’s take on traditional tapas. Usually on the menu are juicy chorizos, baked eggs and thick Spanish omelettes full of waxy sliced potato, all of which is prepared in-house.

There is a sense that Nojan bar-owners gear their establishments towards local regulars rather than pandering to the fickle trends of foreign visitors. The result is reasonable pricing and a refreshingly unpretentious atmosphere.

Go hard or go surf
At night, young people flock to clubs tucked into the backstreets of the town centre. Places like El Barco are good for a mixture of chart hits and Spanish pop, and has a great courtyard for those in need of resting their flailing extremities. Partying in Spain is an endurance event. Venues often hit their stride around 3am, and it is considered poor form to be in bed before sunrise.

For a more relaxed experience there’s a remote Contiki bar perched on the dunes of the far end of Playa de Trengandin. Its makeshift furniture and outdoor seating personify Noja’s understated surf scene. While the waves of the main beach are unsuitable to surf it’s a quick walk to Berria, an equally ideal piece of coast but with impressive breaks. You can hire a board from one of the local surf schools for around 10 euros an hour.

Mi casa
Aside from being home to an absurdly picturesque prison, Berria is a semi-exclusive holiday address for city business types. The primly cut lawns of its large modern mansions seem oddly incongruous with the areas otherwise rustic atmosphere.

Noja, on the other hand, is reasonably cheap as far as accommodation goes. There are two affordable campsites perched atop the town’s cliffs. It’s equally easy to find self-contained apartments with picturesque views over the ocean.

Beyond the post-Pamps comedown
Noja is sandwiched between the budget airline hubs of Santander and Bilbao and so is popular with revellers after the sangria soaked celebrations of Pamplona’s San Fermin festival, but is great all summer through. Its sparse sandy beaches and homely food culture provide a refreshing alternative to the clichéd image of Northern Spain as an overpriced playground for pasty tourists.

Less is more
Compared to the fish-n-chips takeover that has engulfed parts of Spain, Noja remains simple and authentic. Perhaps fitting then that it has one of the sparsest Wikipedia entries I’ve seen, reading in its entirety:

“Noja is a municipality located in the autonomous community of Cantabria, Spain.

Your own kitchen gives the opportunity of cooking with Noja’s unique produce.

Independent stores sell live crabs and razor clams that are easily boiled and enjoyed with friends. The more adventurous can sample one of the nation’s favourite delicacies, gooseneck barnacles. These small crustaceans are usually steamed and taste not unlike octopus. They cost an arm and a leg in restaurants, so preparing them yourself is the best way to go. If seafood isn’t you thing, Northern Spain is famous for producing cured meats, smokey cheeses and world-class wines.