FOR last year’s inaugural crowning of the UK City of Culture 2013, English behemoths Birmingham and Sheffield found themselves on the final shortlist alongside a plucky East Anglian city which at first glance was punching way above its weight. All three lost anyway to Northern Ireland’s Derry in a decision derided as solely political, leaving a lot of Norfolk citizens muttering that Norwich didn’t need the victory anyway, that everyone knew who the real winner was.

“We’re already a fine City of Culture and don’t need any special label,” commented one on BBC Norfolk’s website. “Now we can go back to doing what we do best: living in a vibrant, cultural zenith, out here in majestic beauty, enjoying the arts and general awesomeness.”

It’s a turn of events and opinion that nicely sums up the spirit of this underdog and also-ran, but on a county-wide scale in which residents and visitors understand something that others don’t get, and never will until they too pay a visit. No sooner had I returned from my Norwich weekend than I read a broadsheet travel article highlighting a further geographical problem I too had pondered during the drive — the city is pretty isolated, not on the way to anywhere, so to go there you really have to want to go there. And for this reason it can claim to be its own place, beholden to no one.

Unfortunately though, Norwich has suffered somewhat of an image problem thanks in no small part to its portrayal by comic creation Alan Partridge, voice of ‘Radio Norwich’, as a place on the periphery of modern life, a microcosm of the rural county surrounding it. That’s the long and short of it though — the world view of a fictional buffoon who projects his failures and insecurities onto wherever he finds himself.
. 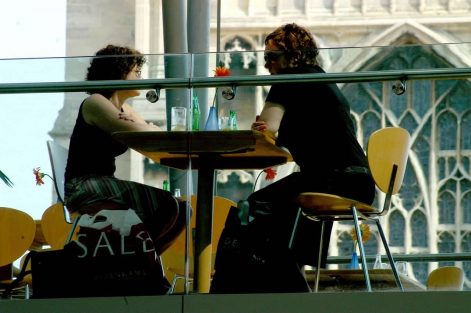 The reality is so different as never to have been properly shown in the TV show, for it would have obliterated the humour milked from its unsophisticated stereotype. Norwich is in fact the country’s most complete medieval Norman city, with its heritage of ancient buildings, castle and (two) cathedrals still enclosed by the original city walls, and the centre thriving culturally and commercially in streets lined with independent shops and what is the largest permanent outdoor market in Europe.

That’s where I first arrive after checking into my charming South African-owned guesthouse, Arrandale Lodge. Bustling beside the Guildhall, the market’s 200 stalls are a riot of colourful roofs and activity which take a good while to fully investigate.

The rest of the city is one of Britain’s major regional shopping centres, a retail heavyweight. It is said there are more department stores here than in any other UK city outside London. As well as the usual M&S, John Lewis and Debenhams, Jarrold’s department store has been serving townsfolk for almost 200 years. Nearby is the century-old art nouveau Royal Arcade housing the famous Colman’s Mustard Shop – a Victorian-style store selling Norwich’s most famous culinary product in every possible form.

Outside the arcade lie The Lanes, home to no fewer than 300 independently-owned shops, while the cobbled thoroughfare of Elm Hill is probably the most photographed street in Norwich, lined with original Tudor buildings doubling as specialist shops. In truth this city rivals Chester and York for its sheer range of traditional speciality stores lodged in historic premises, making it a real pleasure to stroll the streets and window-browse. 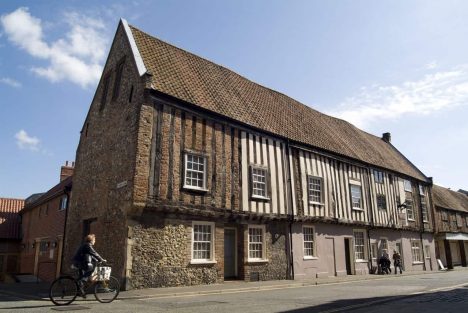 Its vibrant cultural scene also marries history with modernity in the annual Norwich & Norfolk Arts Festival, at 240 years old Britain’s longest standing city festival. Like the Edinburgh Fringe it considerably swells the city’s population (currently circa 140,000), but providentially there are enough watering holes here to satisfy two Norwiches, at one point the highest number of pubs per square mile in the country.

To go back though to its most important bragging right as a medieval city, that’s where the chief fascination lies for history-lovers. The ‘Norwich 12’ are the finest jewels in its crown, a ‘greatest hits’ of buildings dating from the 11th century through the Norman, Georgian and Victorian eras.

I regrettably couldn’t visit the whole dozen during my stay but managed to tick off the premier sites. Firstly the 900-year-old Norman castle, doubling nowadays as the county’s principal museum and art gallery, with outside gardens offering fine views over the city. Next, the Guildhall on market square operating since the 1500s as a prison, court and council chamber; followed by Dragon Hall – a medieval trading hub, unique in England, located on one of Norwich’s oldest streets.

The crown jewels were the two imposing cathedrals: the newer Roman Catholic seat, a leading example of Victorian Gothic architecture, and its iconic Norman predecessor, one of the most complete major Romanesque buildings in Europe, with the largest cloisters in England.
. 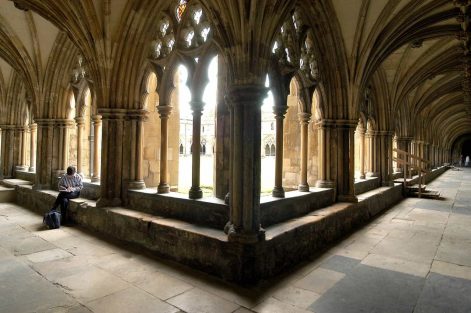 At the 12’s most modern member – The Forum, a £65m landmark building home to BBC East, the municipal library and tourist information centre – there’s also a massive Pizza Express on its mezzanine level offering an impressive city view from its giant windows. I couldn’t resist grabbing dinner there for sunset.

For my final day’s dining however, I had to do what was for me quintessentially Norwich: a visit to Norwich City FC, not for a match-day burger or pie but to the restaurant owned by the club’s director and national cooking institution, Delia Smith. It’s the only place where you can enjoy Delia’s own signature dishes while she smiles at you from a framed picture on the wall.

It’s a final distinguishing venue in a city full of them. With statistical superlatives ranging from oldest arts festival in the country to the biggest permanent outdoor market, Norwich is light years away from any unsophisticated rural stereotype previously peddled, and you really don’t need to be on the way to anywhere else to visit. Britain’s most complete medieval city is a complete destination in itself.