No means No in North Korea

A sucker for punishment and stringent guided tours, AMY PATERSON walks the fine line in the Korean Demilitarized Zone, one of the most heavily guarded borders in the world. 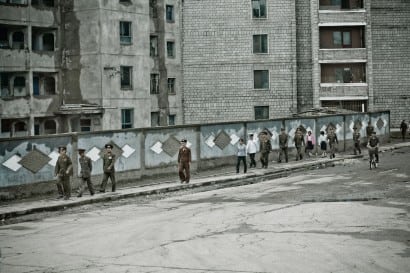 I WAS sitting in the back of a bus on my way to North Korea. A tour of the border between North and South can be purchased for about one hundred Australian dollars and you even get to visit an amethyst factory at the end. Bargain.

The bus was full of Japanese tourists and the English-speaking minority were crammed up the back with our English-speaking guide. There were no South Korean tourists; they rarely take the tour. If South Koreans do wish to experience it they must apply six months in advance and have their background thoroughly checked. I wondered if they were disinterested or just never got around to it, like Australians with Uluru.

Our guide had a very tourist-friendly name: Mr. Kim, who chatted to us about The Forgotten War as we hurtled through the outskirts of Seoul: Brown trees, brown land and a coat of mist making it look more mysterious. Suddenly we turned off the highway and the whole bus knew we had arrived.

Mr. Kim started nodding. “Yes, take a look.” There were gates. There were soldiers running to and fro. We were on our approach to the most heavily guarded border in the world: The DMZ — the demilitarized zone between North and South Korea. 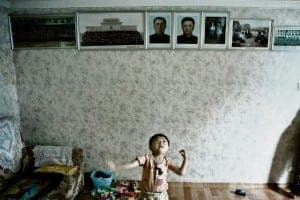 Is that a gun in your pocket?

As soon as we reached the first passport check (there were four) members of the South Korean military boarded the bus and I said to the American girl next to me “They’ve got guns.” She was from New York, and thought I’d lost the plot, but being a naÃ¯ve Australian who’s never seen a gun in her life (except maybe on chubby policemen in Kings Cross) I was in for some lessons in military procedure.

Even the sight of men in army gear was confronting in itself. The barrel of one of these guns came within centimeters of my knee as a guard leant across me to check someone’s passport. Giant barbed gates swung open as our bus passed each checkpoint. Young, slender soldiers peered into our bus from beneath, holding their guns ready. They all wore yellow-tinted nerd glasses for some reason — possibly to shied from shrapnel, another passenger supposed.

I wondered what they thought of all this; these buses of tourists getting ready to experience a war zone from a safe distance.

Rules are made to be broken

Mr. Kim took us through the rules. We were told not to point or make sudden hand gestures in case the North Koreans thought we were holding guns or throwing grenades. There would be many times when photos were strictly not allowed. We had been warned before the trip not to wear army fatigues (thank goodness they made that clear) but jeans weren’t allowed either. We were not to step into North Korea at any time (again, good to be clear) and we would not hold anyone responsible if we were captured or caught up in military action.

When we got off the bus we were escorted around several ‘sights’. Young US soldiers joined the Korean ones and herded us along. The first stop was the border. We walked through a large, ornate building where officials watched us closely but seemed to have nothing much to do. We went up some stairs to a viewing platform outside, and we could now see North Korea. I immediately got into trouble as I nudged my companions and said “Look, it’s North Korea” and gave it a good pointing. I did this a couple of times — as it turns out it’s really hard not to point at things. People grabbed hold of my arms as if I was about to be gunned down at any moment. After that I was pretty much ostracized from the group.

Your side, my side 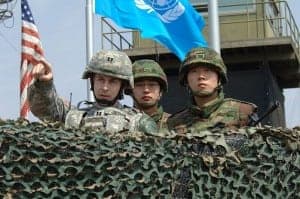 The scene before us was surreal. There are seven buildings sitting on the border, which is marked by a raised cement line running down their centre. Meetings are usually held in the middle building; the South Koreans and Americans sitting in South Korea and the North Koreans in North Korea. Just so it’s clear, there’s a line running down the middle of the table and the room as well. This middle building was where the armistice was signed. No official peace treaty was signed so this is why the two sides are still very much ‘at war.’ We were allowed to walk around the big table, so I have walked into North Korea, albeit very quickly, giving the guard my best ‘I’m not looking for trouble’ face.

We had opportunities to take photos with the soldier who guards the room. He looked just like all the others; a serious fellow who stands with his hands by his sides, fists clenched. This stance is a starting Tae Kwon Do position, and the clenched fists a sign of readiness. His face is hidden by reflective Ray Bans, which are, I’m told, to hide his eyes so his enemies can’t see where he is looking. As bizarre as it sounds, he was bloody scary. In my photo ‘with’ him, I am five meters away from the guy.

I suppose the ‘taking a picture’ guard is luckier than the guards who have to guard the border. They stand behind the buildings exposing only one side of their bodies with one Ray-Baned eye staring at the North Korean guard doing the same from his side. Pretty tense.

On the North Korean side you can see guards walking around in front of a big marble building and some of them look over at us with binoculars. I didn’t point them out for safety reasons.

Stay where I can see you

As we continue on what is becoming increasingly like a Disney ride, I notice the Koreans have a knack for naming things. First we see the ‘Bridge of No Return’ which was used for prisoner exchange after the war. Prisoners could choose to stay in the country they were captured or cross the bridge, but as the name suggests, their decision was final. We then visited the ‘Axe-murder Tree Memorial’ which is in memory of two US soldiers being gunned down whilst pruning a poplar tree. Next is the Dora Observatory where we get to look out through large binoculars at the brown nothingness that is the DMZ. 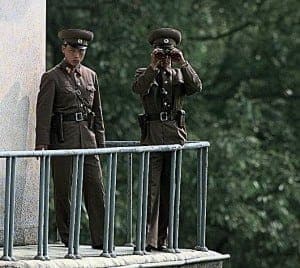 We are told the mist will obstruct our view but miraculously the mist clears for our groups as if waiting for the guide’s cue. The winter landscape was a forest of endless crooked trees with red tinges. There is nothing to see but these close-knit trees, hiding generous sprinklings of landmines. It is as if the scenery knows it’s a war zone, and should look as scary as possible.

“Don’t run off into the bushes” warns Mr. Kim. Not that I was ever temped; landmines and men in watchtowers pointing machine guns is not my idea of fun. Looking through the binoculars on our platform I see a man staring back at me from behind his gun and he doesn’t look happy. I’m not sure if I’m glad the mist cleared or not. After thinking it was all a bit ridiculous, I now feel very unsafe. 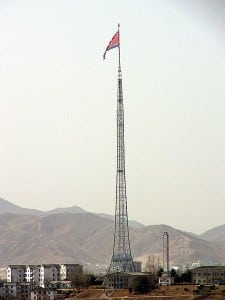 It’s not the size that counts

Lastly, we get a taste of a Guinness World Record North Korean style. Evidently, North Korea has done it; they have beaten South Korea in at least one way. They have the tallest flagpole in the world. In the 1980s the South erected a 98.4 meter high flagpole to fly their flag near the border. So, the North erected a 160 meter one. This is the tallest flagpole in the world. Congratulations. The flag on it is so huge and heavy that when it rains the flag must be immediately taken down otherwise the flagpole could buckle under its weight and fall over. In fact, the flag cannot even fly in a stiff breeze. It seems to sum up North Korean perfectly; full of grand ideas but not actually working.

The gift shop at the end of the tour (yes, gift shop) sells Ray Bans and shot glasses. A place like this can’t possibly exist, behind the mist surely there’s a director yelling ‘That’s not how you hold binoculars menacingly!’ It’s all a set; the soldiers, all actors in rented uniforms.

After a day all about division, our last stop (before the amethyst shop) was the Dorasan train station. The station has been built in the event that the North and South run a train between the countries. It’s all a final show. The station is aglow with fluorescent lights and there are soldiers and ticket ladies waiting to greet us. Even digital timetable boards are working: Seoul to Pyongyang leaving from track zero. There are of course, no scheduled departures.