Love letter to Margate: a slice of English seaside history 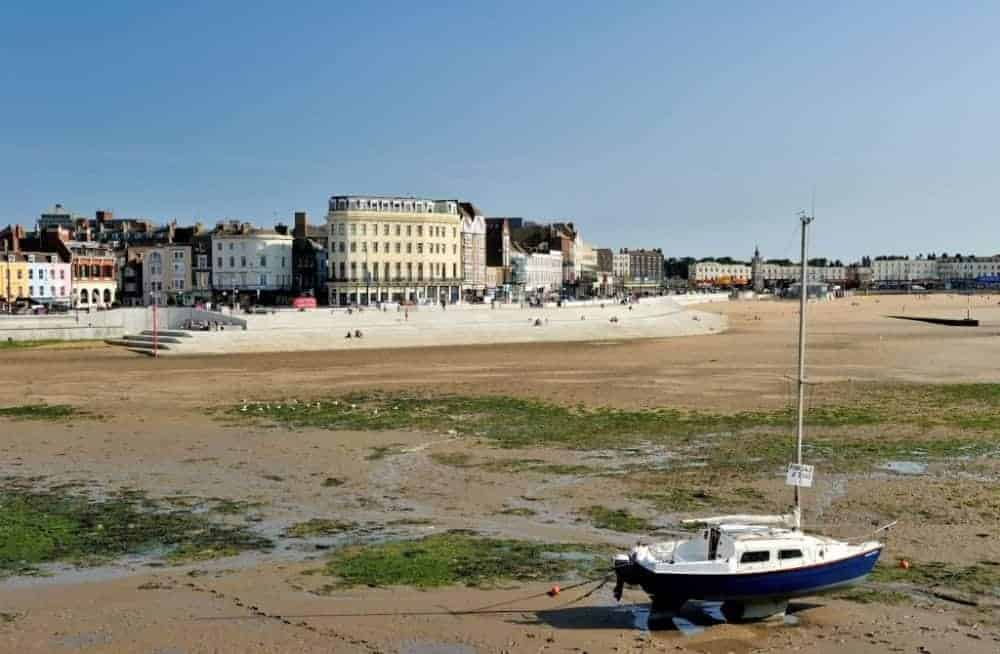 I WAS ELEVEN when I first visited Margate in 1989, and within an hour I was immediately regretting it. The first thing my family did upon arrival that morning was have a full English in a seafront cafe to set us up for the day. Less than an hour later I was literally doing a loop-the-loop on the famous ‘Looping Star’ ride at Dreamland amusement park and remember thinking at the apex of the second loop that this wasn’t such a good idea after all, not just because of breakfast-churn but because this was a pretty scary ride for a boy who barely pipped the height-restriction.

With youthful resilience on my side, however, the nausea dissipated within minutes of disembarking and I went on to have one of the more memorable days of my youth, not just in the rest of Dreamland but on the sand beach, in the sea, at the fish ‘n’ chips shop (not the healthiest day diet-wise) and inside countless amusement arcades, each one a video-game Valhalla of flashing lights and electronic bleeps. The whole town was to me just pulsating fun on a level I’d not yet experienced, and thankfully my parents seemed to like it too because the following year we were back for a whole weekend of it at Butlins’ Grand Hotel on the seafront.

Sadly though, those giddy years at the turn of the 1990s were the beginning of the end of an era for Margate dating back to early Victorian times, when Londoners were first drawn to the restorative air of its beaches and gardens. The rise of the cheap package holiday in the 1980s saw traditional seaside towns like Margate fall out of favour, a decline that steepened in the 90s as its attractions deteriorated and eventually closed due to a lack of visitors. The noughties saw the demolition of Butlins’ Grand Hotel and closure of Dreamland, which had welcomed 2.5m annual visitors in its heyday. Every ride was stripped from the site save the listed scenic railway, which was later partially destroyed by fire anyway. That was then; this is now. A much happier tale has been playing out here since the turn of this decade. Green shoots of recovery have bloomed throughout the town, bringing a smile back to its most downcast quarters. While Dreamland reopened in 2015 as the world’s first heritage theme park, other areas have regenerated themselves to welcome back visitors whose numbers were restimulated by the ‘staycation’ trend brought on by the lengthy recession.

The opening in 2011 of the £17.5m Turner Contemporary, championed by local girl Tracy Emin, heralded not so much a comeback as a cultural renaissance, attracting a more art-loving demographic to what is now one of Britain’s most visited galleries outside London. Inside are progressive modern art installations alongside pieces by Turner himself, famously inspired by this coastline’s epic sunsets and seascapes.

This duality pervades the rest of new Margate. While it retains its traditional seaside charm, there’s more of an artistic edginess about the place, from its new indie galleries to the Banksy-style murals in the Old Town, giving rise to its latest moniker ‘Shoreditch-on-Sea’. It’s little wonder that Margate suddenly found itself on must-see international destination lists – ranked 7th in Rough Guides’ annual Hotlist in 2014, the only UK destination on there.

To this day it’s all a world away from the innocent town I remember, but I would much rather it was as it is now than the crumbling, forlorn place it had become when visitor numbers dried up. Make no mistake, there’s still a lot of work to be done, as certain areas remain run-down and awaiting their facelifts; the brutalist tower block near the station still crying out for a paint-job. My most recent visit though has been rewarded with new sights and attractions I never knew existed before, like the fascinating subterranean passages of the Shell Grotto, painstakingly lined with literally millions of seashells – how they got there nobody knows.

History lovers will be captivated by the town’s extant Tudor House – at 500 years old the oldest building in old ‘Meergate’ and one of the oldest of its kind in the whole of Kent. I was lucky enough to have a private tour around the listed building with volunteer Barry Shepherd, hearing all about the sustained efforts and difficulties in preserving this vital piece of local heritage. I think my most memorable experience though from this particular visit to the town has to be cycling the famous Viking Coastal Trail from Margate Harbour: a leisurely sea path of traffic-free promenades and country lanes, taking in the striking chalk cliff stacks of Botany Bay, Charles Dicken’s beloved holiday town of Broadstairs, and finishing up in Ramsgate Harbour where I enjoyed a rewarding seafood meal at Little Ships restaurant overlooking the marina. (Big thanks to The Bike Shed on Canterbury Road for supplying their new range of electric bicycle for the trail, which truly came into its own on the uphill stretches into Broadstairs!).

Back in Margate, the food and drink options naturally reflect the resort’s renaissance, with restaurants encompassing the superlative Ambrette offering unique Anglo-Indian cuisine, to the independent Great British Pizza Co, whose hip upcycled-décor venue overlooks the harbour, perfect for a sunset pizza meal. Beer aficionados can choose from several nearby micropubs serving real ales as they ought to be served, while cocktail lovers should check out The Glass Jar, whose shabby-chic barroom also exhibits art and photography from local artists. Perhaps most importantly is where to lay your head after such a full day of leisure and cultural pursuits, and again Margate does not disappoint on this front. I stayed at what is regarded as the best hotel in town: the boutique Sands Hotel, completely renovated a few years ago from the shell of what was once the Victorian Terrace Hotel in the 1880s.

Occupying a prime spot on the golden beach, its charming seaview rooms are westward facing, and thus receive the full glory of the sunsets that disappear over this stretch of coast, the same ones that so inspired JMW Turner 200 years previously. Dinner or late afternoon tea here in the colder months comes with an unobstructed view of them through the first-floor restaurant’s tall windows, while breakfast in the same room gives you as inspiring a start to the day as you could hope to receive. Finally, I also discovered Cliftonville’s Walpole Bay Hotel along the Viking Coastal Trail, stopping for a cup of tea and a wander around its ‘living museum’ which offers a fascinating snapshot of the Edwardian era from which the building dates. It still uses its original trellis gated lift to this day.

So, whether it’s the country’s history you’re interested in, or a more personal history of childhood visits like my own, resurrected Margate is truly a place that rewards return visits. I personally look forward to taking my kids to Dreamland one day to recreate my first youth-defining experience of it, and probably to the Turner Gallery afterwards. The seaside town of my younger years may look a lot different these days, but there’s still just as much fun to be had, no matter the time of year.

For further information on visiting Margate go to www.visitthanet.co.uk