Life is a Carnevale in Venice

With ‘carnival’ season quickly approaching around the world, NINA McGRATH visited the famed canals of Venice to unmask one of Europe’s most giddy traditional celebrations. 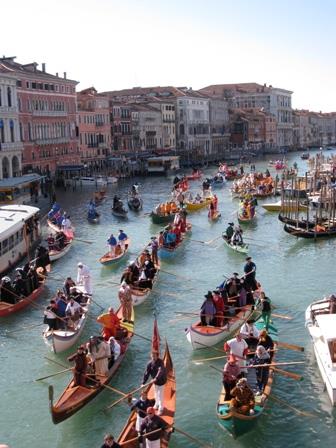 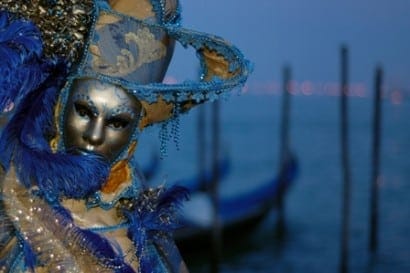 WITH so many places to see in Europe, it is hard to justify returning to a city that my husband and I had already seen. However, one of the few exceptions was Venice, as the chance to experience Carnevale was all the excuse we needed to fly back to the city of canals.

Carnevale di Venezia commences approximately a fortnight before Ash Wednesday and ends on Shrove Tuesday (also known as Pancake Tuesday, Fat Tuesday or Mardi Gras). These dates differ annually (in 2012 — 11 to 21 February), but still generally fall at a cool time of year, which I am sure the heavily costumed participants appreciate. The Venice Carnival dates back to 1268, however it was the Italian government’s promotion of Carnevale as a tourist attraction in the 1970s that has lead to over 30,000 visitors descending upon Venice each day of the Italian ‘partito’ (party).

Putting a face on
Extravagant masks are what Carnevale di Venezia is most popularly known for and the masks were originally worn at Carnevale to conceal the wearer’s identity and social class, a welcome relief for those in the lower classes of the strict hierarchical society of the Republic of Venice.

The Alilaguna motoscafi (water bus) from Venice’s Marco Polo Airport deposited us at San Marco Giardinetti and we soon found ourselves amidst a costumed crowd. The full costume is breath taking; it covers the wearer from head to toe and, particularly for costumed couples or groups, conforms to a colour theme such as black and white, green and gold or sunset hues. The face mask is painted and embellished with gold leaf, silver leaf, diamantes, brocade, lace and feathers. The mask is framed by a wig and/or a hat decorated with tulle, fabric flowers and feathers. Others wear the traditional tricorn hat adorned with a feather or the jester’s hat jingling with bells. Women wear full length dresses with full shirts, long sleeved jackets and gloves. Some carry ornate lace or feather fans, parasols or delicate evening bags. Men wear puffy trousers, boots with elaborate buckles, shirts, vests, jackets and capes of all lengths with large stiff collars, and brandish sceptres with ornate tops. Snap happy in canal city
Whilst checking the rules regarding taking photos of the costumed Venetians, I was delighted to discover that all they desire is to be photographed, and as a result they will willingly pose for you or with you. The conduct of the tourists was admirable, a quick pose with the costumed Venetians and then they’d step aside to allow the next person to do the same. Venice Carnevale is a photographer’s paradise, which was particularly evident in the breakfast room of our hotel the next morning. Serious chunky professional cameras adorned every table (except ours) and the other guests were quoting model numbers, comparing shots with full discussion of the settings used and trading tips on where to get the best shots that day.

Having a ball (for free)
Some tourists go all out, paying extravagant prices to hire traditional costumes and attend the masked balls held in the old palaces and Venice’s top class hotels. We found ourselves among the majority who are content to don a mask, hat or wig and take in the free entertainment such as street theatre, puppet shows, Commedia dell’Arte, mime and movies with piano accompaniment. There is also music and dancing, from Tango concerts to bands to DJ sets, and even an ice rink at Campo San Polo.

Getting involved in Carnevale di Venezia
The Flight of the Angel
At noon on the first Saturday of Carnevale a ‘guest of Venice’ in costume (in 2011 it was Silvia Bianchini, Maria of the 2010 Carnevale) is lowered from the bell tower of San Marco to the loggia of the Palazzo Ducale, to pay homage to the Doge and open Carnevale.

Festa delle Marie
The traditional ‘Festa delle Marie’ stems from a tradition where the Venetian Doge would award twelve ‘beautiful but humble’ Venetian girls with jewels as a bridal dowry. Today it is more of a beauty pageant. On the first Saturday of Carnevale the twelve Venetian girls, accompanied by groups in historical costume, parade from San Pietro in Castello to Piazza San Marco where the ‘Marie’ are presented to the citizens of Venice. On the final day of Carnevale, following a water parade from San Giacomo dell’Orio to Piazza San Marco, the Doge crowns the winning “Maria”.

The Best Masked Costumes Contest
The Piazza San Marco stage is home to three days of qualifiers, and the finals of the best masked costumes contest.  An international jury awards the ‘best mask of the Carnival’, and ‘best nineteenth century style mask’ based on the costumes colours, originality, and the entrants grace and bearing.

The Silent Regatta
The Silent Regatta is held at midnight on the final day as the closing event of Carnevale. A long parade of gondolas and row boats proceed down a candlelit Canal Grande, from Rialto to the basin of San Marco to the strains of a trumpet atop the leading boat. On arrival at San Marco, thousands of paper lanterns are released into the sky to represent the end of Carnevale and the start of Lent.

Cruising Venice-style
Feeling that we had seen enough of Carnevale, we caught vaporetto 1 (another waterbus) from San Marco to San Marcuola, a relaxing cruise along Canal Grande, and walked through Cannaregio to Ghetto. The quiet canals and all but deserted neighbourhood provided a stark contrast to the crowded, confetti strewn streets around San Marco.

We wove through streets and over bridges to a small bÃ cari (small, hidden bar) that had been recommended to us for its ‘cicchetti’. Cicchetti covers all manner of small snacky items such as olives, or mini serves of other menu items(similar to Spanish tapas), but we went for the small slices of bread or polenta with various toppings secured with a toothpick. Arranged in rows under a glass counter they looked like a flotilla of rafts bearing delicious savoury treats. Some of the toppings were easily identifiable; buffolo mozzarella with sundried tomato, prosciutto with olive, salami and marinated artichoke hearts. We took a chance on a mysterious white foamy topping which certainly paid off. It was baccala mantecato; mousse of cod fish whipped with oil and spices, sounds odd but it tasted incredible. Cicchetti are usually accompanied by a small glass of local white wine, known as ‘ombra’ (shadow), but they go pretty well with beer too. I closed my eyes, savoured the flavours and declared cicchetti yet another reason why Italian is my favourite cuisine. 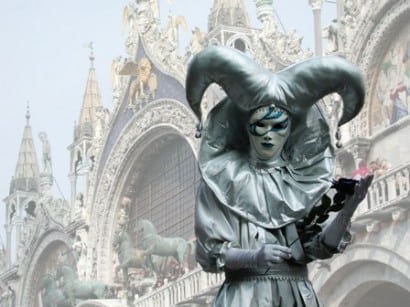 Enjoying Carnival around the world

Brazil — Probably the most famous of all the international ‘carnival’ festivals, the whole country of Brazil celebrates together for this massive fiesta! Rio and Salvadore are the main cities where you can join in the activities (from samba schools to rave blocco parties) and in 2012 the official Brazil Carnival dates are 17 — 26 February.

Colombia – Barranquilla’s Carnival (18 – 21 February in 2012) is another traditional South American celebration and annually includes a Battle of the Flowers, a Great Parade, lots of singing and dancing and lot of fun.

India – Carnival (or ‘Intruz’) is unique to Goa in India and was introduced by the Portuguese. For three days and nights, the legendary King Momo takes over and the streets come alive with music and colour (in 2012, 18 — 21 February) .

Greece – Throughout Greece’s Carnival season (called Apokriés), people disguise themselves with maskarÃ¡des (masks) and engage in pranks and general revelry (17 — 26 Feb in 2012). Patras is the best place to get your Greek Carnival on or try Tyrnavos which holds an annual Phallus festival.

England — Notting Hill Carnival isn’t at the same time as most of the others but is still a huge party and one not to be missed for Aussies living in London. It is celebrated annually on the August Bank Holiday (26 — 27 August in 2012) and is led by members of London’s Caribbean and other ethnic communities (sometimes it is suggested this London event is even larger than Rio’s Carnival!).