From seeing the magestic Northern Lights to sledging with a pack of brawling dogs; Iceland is a world apart. 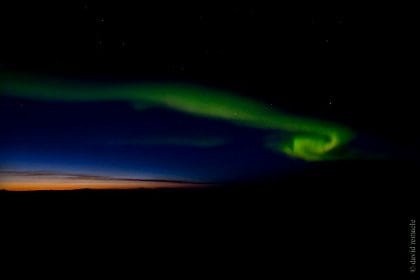 Seeing the Northern Lights in Iceland

WITH a pizza costing the best part of £30, Iceland doesn’t quite cut it as a cheap weekend away but potential bankruptcy is a risk worth taking to experience the weird and wonderful delights of this charismatic country.

The capital Reykjavik is surrounded by ice capped mountains one side and the domineering North Atlantic on the other. Colourful houses dot the quaint roads and come nightfall, the beats and vibrations of music from trendy bars fill the air.

I arrived in Reykjavik on a cloudy Friday evening with my fellow globetrotter, Priyan. Together we had high expectations for the trip. We wanted to see the Northern Lights.

The Northern Lights, or Aurora Borealis as they’re more affectionately called in scientific circles, are actually solar particles from the sun that have mixed with gases from the Earth’s magnetosphere.

The combined energy creates light particles and when more than 100 million are present; the colourful illusion that is created which we refer to as the Northern Lights.

Like all natural phenomenon, seeing the Northern Lights is never guaranteed and they’re only visible under certain conditions. Clear and cloudless skies are a must and there can’t be a flicker of light pollution from nearby cities and towns – easy done in barren Iceland.

The Northern Lights are most prominent north of the Arctic circle but sightings have been recorded as far south as Scotland and can be spotted between November and March.

The phone rang mere moments after we dumped our bags in our modest yet comfortable hotel room. It was Henrik, a local tour guide that I had contacted before leaving London.

“Would you like to go searching for the Northern Lights tonight?” he asked, “We have perfect conditions.”

I didn’t need to be asked twice. Almost immediately I was rummaging through my discarded suitcase for my thermals and half an hour later Henrik was parked outside. Priyan and I climbed into his spacious and rather well-used 4×4 and the three of us set off.

Adrenalin and anticipation was pumping through my veins as Reykjavik’s twinkling lights faded in the distance. Henrik was middle-aged and had lived in Iceland all his life. “I did go to Norway once though,” he said proudly. It was clear from the outset how much he treasured and valued his native Iceland.

We drove for some time through the impenetrable darkness, our heads eagerly pressed against the glass of the window all the while. Only the sporadic car passed us by, their headlights piercing through the vast blackness. The more miles we covered, the further I wanted to go, itching to be as far away as possible from the city and its afterglow of civilisation that spilled into the air. Henrik frequently dimmed the headlights to survey the sky. He would occasionally wind the window down and stick his head out just to be sure.

Suddenly, and with the excitement of a young child at Christmas, he pointed up and said, “there!” before abruptly hitting the brakes and pulling over on the side of the road. I eagerly clambered out and stood ankle-deep in the crisp snow as an eerie sense of wonder engulfed me. Streaks of shimmering greens danced across the smooth velvety sky and after no more than a minute or so we were plunged into darkness once again.

Feeling tantalized by our brief introduction to the Northern Lights, we hotfooted it back to the car and resumed our search. We spotted the odd splash of pale greens and blues as we raced through the barren countryside but they never lasted long enough to warrant stopping. I soon realised that Mother Nature was teasing us, egging us on with short but sweet glimpses. But this was one game of cat and mouse we were all ready and willing to play.

Our return to humanity was imminent but we were treated to one final performance. We stood by the side of the road feeling cold but not taking any notice of it. It was completely silent and above us a section of the sky was glowing faintly, constantly adapting and evolving.

As the mystical glow subsided and we returned to our vehicle, a monstrous van rumbled passed, packed with dozens of tourists who were also on the search for the elusive lights. I thanked my lucky stars that we’d avoided an experience – and company – that catered for the masses.

Our private excursion may have cost more but not sharing such a magical moment with the sounds of cameras clicking and various accents was priceless.

“Do you ever get bored of driving around looking for the lights every night for six months?” I asked Henrik. “Never!” he replied, “Each time is different but equally as beautiful.”

The next morning we were still in awe of the last night’s sights, sounds and sensations. We even considered going on another Northern Lights tour that evening but realised it would be foolish to overlook Reykjavik’s other attractions.

Thrown to the dogs

Outside was dark. Even at 10am, the sun showed no sign of emerging, but there was no time to dwell on that — we had an appointment with some canines. A couple of hours later we found ourselves being pulled across a glacier by a team of huskies.

The glacier looked as you might expect — vast and beautifully white like a blanket of glistening cotton stretched out in all directions.

Before our mini-expedition started we were shown into a quaint wooden hut, which unsurprisingly smelt of dogs. Heavily padded body suits were soon issued and we swiftly climbed into them. They too smelt of dogs. Protected from the elements with our semi-sumo-like outfits, gloves and hats, Priyan and I proceeded outside where our pack of excitable hounds had been assembled.

Careful navigation was required as we made our way from the snug interior to the sledges — a treacherous and worryingly icy verge had to be tackled. Falling over in spectacular fashion was a strong possibility and a fair few people did, although it was far less painful and rather more amusing for onlookers, thanks to the body suits.

Joining us on the sledge was a group of three friends. The five of us had the briefest of moments to acquaint ourselves before we were told to part our legs and allow a perfect stranger to sit in between them. A few awkward glances were exchanged as our guide instructed us where to sit on the sledge. Thankfully I was selected to sit at the very front and subsequently spared the ordeal of having someone whose name I’d already forgotten, use my thighs as armrests.

My view for the next hour consisted of seven temperamental huskies and their backsides. They seemed to be more interested in fighting with each other than dragging a load of foreigners around while our guide would often produce a series of grunts and other strange sounds that seemed to have little or no effect.

Simpson, the ring-leader of the pack, was the main culprit. He would suddenly stop in his tracks and turn, snarling and growling at his companions before launching a ferocious attack.

Greenland huskies are not as speedy as their American cousins so our ride was never a fast-paced, cross-country adventure that some may imagine. The mutts did, however, have their moments and occasionally treated us to a spurt of pace. At such times, I noticed patches of yellow snow whizzing past but luckily for all on board the wind was on our side.

Upon our return to base we were given the opportunity to get to know the huskies a little better. I cautiously approached Simpson who was now lying down in the snow, panting heavily. I’d been assured that he was actually quite friendly but my heart beat with fear as I edged closer to the unpredictable beast. Before long, I was slouched on the ground beside him giving some well-deserved and much-appreciated attention.

Then it was time to say goodbye to Simpson and negotiate the formidable icy bank once again. After several laughable attempts, I ditched all remaining dignity and literally crawled up.

I sipped on a steaming cup of hot chocolate and returned to the chilly outside just in time to watch a young and glamorous American woman in knee-high stilettos try to conquer the slippery slope. Quite why she was wearing two-inch heels in such a place beckons belief. She soon had an audience who all burst into applause when she finally reached the top with the help of her humiliated boyfriend.

Over a pint of beer and some traditional Icelandic food (get the wallet out), Priyan and I sat in wonder of this extraordinary country and everything it offered. We’d had once-in-a-lifetime adventures and yet only scratched the surface.