ITCHY FEET: Our poor intrepid travel blogger Liv Hambrett, holed up for the summer in the Greek islands, has been forced to come to terms with the delicious local cuisine. 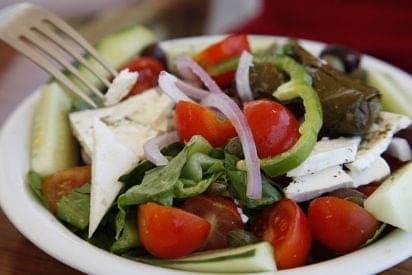 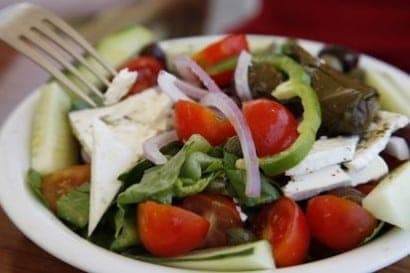 BEFORE I left Germany for the Greek island of Santorini, this Aussie globetrotter had a little meltdown. It was to do with spargel.

For me, the best thing about spargel (asparagus) is how tremendously satisfying it is to say – shparrrrrgel. For Germans, the best thing about spargel is the spargel season, during which they essentially eat nothing but the long, white, boiled spears, smothered in hollandaise sauce. For as long as the season will allow them. I left in the midst of spargel season, quite unable to fathom ever eating another spear again.

In my irrational state, brought on by the consumption of another plate of spargel, I extended my wrath to the other staples of the German diet – schnitzel, schinken (ham) and kartoffel (potato). The ridiculous thing is, I adore schnitzel. And the comforting embrace of solid, warming German cuisine is the only thing (apart from gluhwein) that got me through my first sub-zero winter.

Therefore, my spargel meltdown was entirely unfair and likely to do with far deeper rooted issues like, for example, a vitamin D deficiency and an itchy impatience to splay beneath some serious sun.

Now I am splaying beneath said serious sun. My mind, though, remains almost constantly on food (and occasionally I do find myself thinking mistily of schnitzel lathered in mushroom sauce) because Santorini is something of a food paradise.

This strange little dry, dusty, volcanic island, said to be the site of the lost city of Atlantis, produces some of the most delicious, sun-filled flavours to ever grace one’s taste buds. It is crammed with tiny tavernas and sprawling, cliff-perched restaurants. Family kitchens rustle up big, fresh, traditional dishes using produce from the front and back garden; the former being the ocean.

Because of the tremendous joy such food filled occasions have brought me – and because I have recovered from my spargl meltdown with the aid of daily tzatziki and feta – I have taken it upon myself to share the possibilities with you so. Thus, should you ever find yourself on this island (or potentially enticed to find yourself on this island by the forthcoming food discussion) you will know precisely what to look out for and where.

First things first: go Greek
Restaurants will offer dishes from other countries and sometimes you may feel inclined to go for a pizza or hamburger. Don’t.

Make the most of island produce and the flavours of Greek kitchens. Homemade garlicky tzatziki, crunchy fried tomato balls, sticks of tender souvlaki, dishes of slow cooked lamb, earthenware pots of piping hot, belly-warming moussaka and parcels of grilled fetta with herbs and red onion. A lot of what you’ll eat will be home grown and the flavours are fresh, simple and strong.

Breakfast
The Greeks don’t really do it. Frappes and cigarettes generally suffice, but if you want something a touch more nourishing, most places offer Greek yoghurt and fresh fruit. And everywhere will offer a frappe, the Greek iced coffee that is, quite literally, coffee and ice – milk and sugar is optional. The important thing with frappes is that you take minimum three hours to consume them. Anything less is offensive.

Tomatoes
Santorini is famous for a few things and the tomato is one of them. No joke.

The Santorini tomato – the ntomatini – is, really, a mutant cherry tomato, but it bursts with sweet, sunny flavour. It appears in two notable dishes – fried tomato balls and the Santorini salad. The former is a mouth watering concoction of tomatoes, fava, basil, flour and feta, rolled into a ball and fried in olive oil and specific to the island. The latter is a feast of ntomatinis with capers, onion and local chloros cheese. Both should be consumed as frequently as possible.

Wine
Covering the island, alongside the tomato plants, are curious little shrubs. On these little shrubs, grow grapes. The winds that blow in from the North every summer – the madness inducing meltemis – make it impossible to grow grapes on vines and so the canny Santorinians developed grape shrubs, hardy plants that withstand the dry soil and intense winds. The result is highly distinctive wine.

There are several wineries on the island, where you can learn about the Santorinian wine making process and sample the fruits of their labours.

Make sure you try vinsanto, a richly sweet red wine with notes of chocolate, cinnamon and orange. The grapes used in vinsanto are dried for two weeks, to allow for full, sun drenched flavour.

Seafood
The benefits of living on an island … daily, fresh seafood. Octopus, squid, mussels and fish, grilled, fried and stuffed.

Go to villages on the water – many are lined with seafood tavernas – for the best produce. Akrotiri and Ammoudi Bay are the places to go for fish so fresh it’s practically caught in front of your very eyes with the added bonus of a beautiful backdrop to your meal.

24 hour bakeries
Because everything happens late on the island, it’s highly likely that, come 3am, you’ll get hungry and be wide awake for it. In step the 24 hour bakeries, dotted about the island. They exist to feed you at all hours of the day.

The best bites are: Spanikopita, chicken pie, moussaka pie, enormous 300g cookies stuffed with chocolate or cinnamon spiced raisins, little balls of banana cake rolled in icing and sprinkled with nuts. Try to time your visits to coincide with the baking cycle – the fresher the better.

In all fairness, it’s possible I’ll have some sort of a meltdown in another month and be escorted from a restaurant shrieking loudly about not being able to eat another bite of tzatziki. But for now, bring it on. All of it… including the little box of chocolate coated cakes I am eating for lunch, fresh from the bakery.