Giddy up in Ireland

Fancy an Irish adventure off the beaten path? A new Ireland based travel company called Giddy Goats Tours wants to offer something wild and different. 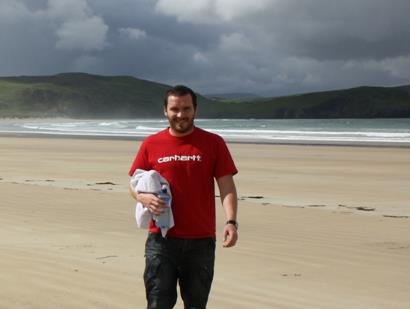 DUBLIN based entrepreneur James Mannion 27, is the man behind GiddyGoatsTours.ie

The former banker wants to offer visitors the chance to see what he calls “the real Ireland”.

A childhood of summers in Connemara and extensive trips to Africa, Australia, New Zealand and the U.S. while at university, gave him a passion for exploring.

An economic crisis and a forced redundancy offered him the chance to follow his heart. It was during his reflective period of unemployment that the brainchild of his business sprung.

“On the advice of my mother I headed down to a traditional music festival, The Willy Clancy festival in County Clare. I saw some guy in one of the bars of Malbay one evening belting out ‘Puc ar Buile’, an old Irish song.

“The sound coming from him was guttural, defiant and above all, Irish. It was in Gaelic and I felt inspired by this guy singing a ballad about some mad goat.

“I felt lucky to be Irish. I decided there and then that I wanted to bring the real Ireland to the world; to show visitors what Ireland was all about.”

Mannion does not want to bring his clients on wild goat chases but he does want to help people discover Ireland in a personal, unconventional way.

He has not aligned itself with a chain of hostels, preferring to give his clients a choice of select camping spots in destinations he goes to.

“Camping opens up so many opportunities to stay in areas which would otherwise be impractical or impossible to access, I want to take tourists off the beaten track, away from the crowds and to experience some breathtaking scenery from the moment you wake up.”

Mannion has invested in a bus for transportation and state of the art camping equipment. He claims his business’s secret ingredient is his knowledge and understanding of the Irish countryside.

Giddy Goats Tours depart twice weekly from Dublin every Monday and Wednesday from May until the end of September.

Typically, tours includes camping out for a night on an island (where James prepares a delicious barbeque and hearty breakfast), sunset at the Cliffs of Moher, an adventure activity and a visit to a festival.

“The business is an infant. I want to include more off-beat festivals to my clients; for example, the Dunfanaghy jazz festival in Co. Donegal is as New Orleans as it is Irish. It’s a beautiful village that I think might be suffering from the crisis as much as any other small village in Ireland but it’s got x-factor – I want to show people this side of Ireland.”