TRAVEL WRITER ENTRY | Argentinian football is quite something to behold and although probably not for the faint hearted, it should be experienced by football novices and fanatics alike. LUCY HOLDSWORTH experiences Futbol in Argentina. 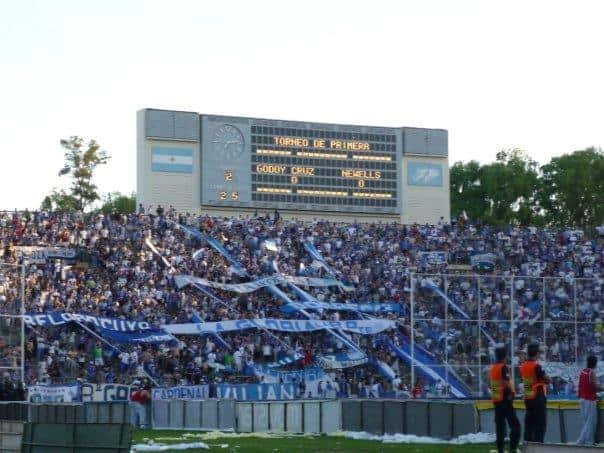 Travelling around Argentina, I am drinking in the delights of the wine growing world of Mendoza, right on the border of Chile, but the grape is not the only thing that gives the locals a high.

Futbol — or football to you and me — is their inspiration and at the top of the league is Godoy Cruz, affectionately known as el Tomba.   I am on my way to join the thousands in the Malvinas Argentinas Studium in Parque General San Martin to witness the annual crunch match against Rosario’s Newell’s in the Primera Division.  And we’re all expecting great things.

Approaching the stadium on a fiercely sunny afternoon with the mountains in the background and the tribal beating of the Barra drums sounding the way, I feel like I’m approaching something almost prehistoric. I´m brought back to earth with the three stages of security checks and riot police thoroughly patting me down, relieving me of my water and pen. Weapons, it would seem, can be a problem.

Having been warned that pick-pockets operate on a huge scale – one: in the park and two: at a football game, I have wedged ticket money in my bra, taped my camera to my chest and dug my phone so deeply into a pocket that it´s quite a surprise when it rings.

In case you hadn´t noticed Futbol is huge in Argentina and obviously no-one takes it more seriously than the fans. If I was brave, I might suggest that they are as interested in the pre, during and post abuse of opposition fans as they are in the game, but I´m not.

In the stadium, teenagers take it in turns to stand and heckle the opposing fans. The success of their new and inventive insults measured by the roars of laughter from the crowd. Fortunately my basic Spanish only detects ¨your mother¨.
In fairness, most of the fans have complete dedication to the game, travelling for days with banners that cover entire sections of the crowd. The Barra are the heart of the fans, talented musicians with incredible beats that make for an electric atmosphere. They spur their fans on to endless songs intended to encourage the players and aggravate the opposition.

Unfortunately, the scorching afternoon had taken its effect on the players and not a lot was happening on the pitch. My football loving friend describes the match as one of the ten most boring he has ever seen. Both sides play very cautiously and without their recently injured main goal scorer Jairo Castillo, el Tomba are unwilling to commit players forward. I´m rather pleased – I have an excuse to watch the crowd.

By the end of the game it´s still nil-nil with the only person seeming to have got lucky being ‘your mother’. There´s a flurry of activity on the pitch as time drags to a close, but after a couple of questionable yellow cards, the whistle is blown. Or at least I think it is as it´s hard to make anything out over the din of death threats to the ref.

If you´re brave enough you can stand in the ´Popular´with tickets going for 15 pesos. I sat in the slightly less vocal ´Platea´ and even though it wasn´t a great game, it was well worth the 30 pesos.  Argentinian football is quite something to behold and although probably not for the faint hearted, it should be experienced by football novices and fanatics alike. Lucy Holdsworth entered our Great Travel Writer competition for May. Submit your entries for July now!

A significant number of the submissions peddled inaccurate claims about the health effects of 5G.