Finding Nemo, and 500 other species, at Ningaloo Reef

Ningaloo Reef in Western Australia is considered Australia’s family friendly alternative to the Great Barrier Reef. Explore the reef at your own pace while you watch frolicking dolphins and whales. 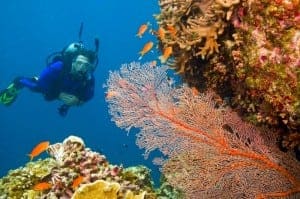 The underwater world at Ningaloo reef, near Exmouth Western Australia, is a menagerie of more than 500 species of tropical and sub-tropical fish.

A flamboyant landscape of shapes and colours are composed just under the emerald surface of one of Australia’s best kept secrets. Ningaloo Reef, Coral Bay.

Ningaloo is the world’s largest fringing reef, stretching for almost 300km along an undeveloped piece of its northwest coastline.  Here a cool ocean current from the south meets a warmer current from the north, meaning the reef is home to a unique mix of tropical and sub-tropical species.

The reef is far more accessible than the Great Barrier Reef.  While you need a tour operator and a few hours travel time to access the GBR; Ningaloo holds some of the country, and possibly the world’s, most awe-inspiring snorkeling opportunities which you can explore at your own pace.

Among the 500 fish species you are likely to come across are; silver snappers, green and purple parrot fish, orange and white striped clown fish and racoon butterfly fish.  But Ningaloo is most famous for the largest member of the shark family.  These 20 ton giants draw the most interest to Ningaloo.  Whale sharks are the biggest fish in the ocean and from March to July they feed in Ningaloo’s krill-rich waters.

The whale sharks happily share the turquoise bay with green turtles, hatching on nearby beaches, manta rays, barracuda and both leopard and black tipped reef sharks. Coral Bay also welcomes 35,000 whale visitors every year. Migrating past Ningaloo between June and November, mothers and calves enjoying the relative safety of the shallows, fattening up for their long journey south.

But if snorkeling is not your ‘thing’, the amazing sites can still be enjoyed by taking a cruise along the reef in one of the glass-bottom boat cruises.