Every traveller has different priorities when travelling to ‘the floating city’, but on the list for NINA McGRATH was to take a gondola ride, see St Mark’s Basilica and visit the Doge’s Palace. 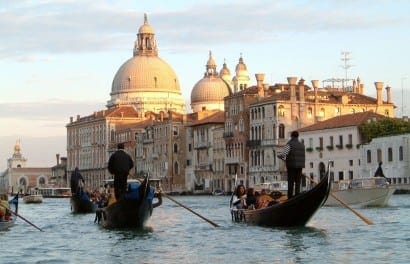 I HAD pictured a gondola ride in Venice as a romantic experience; my husband and I reclining in the gondola in the bright sunshine, the gondolier joyfully serenading us as we gently glided along the Venetian canals. In reality our experience was a little different.

Venice by gondola
For a start it was at night, part of a ‘Venice by night’ walking tour which was to complement seeing Venice by day.  It started to drizzle as we were split into groups of six for each gondola. The gondola seemed very unstable, rocking wildly as we each clambered on board. The gondolier looked on, bored, as we struggled to stay out of the drink. He then pushed off, whipped out a mobile phone and spent the entire trip shouting into it while steering with his other hand.

Romantic it was not, but there was a sense of camaraderie as our flotilla swept along the canal, calling to each other and waving to the people on the bridges as we passed beneath them. Not all the gondoliers were sullen, one of them broke into ‘That’s Amore’ and we all joined in, our voices echoing in the quiet canals. Back at the dock we tentatively climbed out of the rocking gondola and were pleased to discover that not one of the tour group had ended up in the canals. We followed the guide through deserted Venetian streets and suddenly emerged into an almost empty St Mark’s Square (Piazza San Marco).

San Marco and his square
“Take a good look at Piazza San Marco,” called the guide. “It will look much different to you when you see it tomorrow filled with people.”

The next morning I discovered that she was right! Venice by day was a totally different experience. We had all day to wander around, and what better place to wander around than Venice, ‘the city of bridges’. Narrow streets led on to bridges and every bridge seemed to have picturesque views of the canals in both directions. Gondolas glided past us, water buses, taxis and private boats chugged along. The streets suddenly opened into piazzas of all sizes, with drinking fountains or wells in the middle. 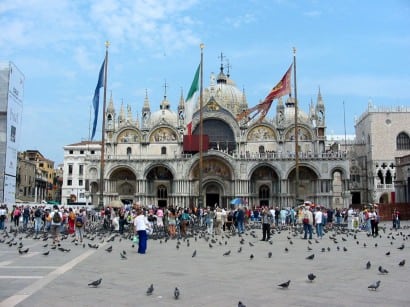 We visited St Marks Basilica and quickly saw why it was nicknamed Chiesa d’Oro (Church of Gold). The interior absolutely glitters with the gold from the Byzantine mosaics. The Venetians were wealthy and they weren’t afraid to show it. We climbed up to the bronze replicas of the four horses of St Mark for a bird’s eye view of St Mark’s Square. The original horses are kept in the museum, probably a good idea given their penchant for travelling. They were stolen from the Hippodrome of Constantinople by one of the Doges of Venice in 1204, then taken to Paris by Napoleon in 1797, retuning to Venice in 1815. They appear to be deep in conversation, and I suspect they’re planning their next trip.

It’s a Doge’s life
On to the white limestone and pink marble Doge’s Palace (Palazzo Ducale), the official residence of the Doge (‘the most serene prince of Venice’) and the seat of the republic of Venice’s government. We arrived early and managed to get tickets for the ‘Secret Itineraries’ tour which takes you through concealed doors and hidden passageways to the cells from which Casanova escaped.

We stopped at a stone carving in the wall of a face. The face was framed by a headscarf gathered in bunches at the temples. Its piercing eyes glared out from below a monobrow as wild as a line of breaking surf. The mouth was open, a hole through which a letter could be slipped. This was the Bocca di Leone, a mailbox in the wall of the Doge’s palace to post accusations to the magistrates. Words carved in the stone below translated to “Secret denunciations against those who conceal bribes to officials or will collude to hide the true revenue from [the authorities]”. Essentially it was where you could dob someone in for tax fraud.

We climbed the magnificent Scala d’Oro, (golden staircase) and then slipped through a door to start the ‘secret’ part of the tour. The offices of the doge’s secretary, the keeper of the secret archives and even the grand chancellor were remarkably spartan compared to the lavish and ornate decoration of the rest of the palace. We passed through the torture room where a single rope hung ominously from the roof into the centre of the room and climbed up to the piombi (the leads), half a dozen cells in an area under the lead roof of the palace. This was the original prison (before the new prison across the Bridge of Sighs was built) and continued to be used for certain offenders, typically political prisoners.

Making like Casanova in Venice
Casanova was imprisoned in the piombi following his arrest in 1755, when he was accused of being a freemason, spreading antireligious propaganda and dabbling in magic, all of which appear to have been true. He was sentenced to five years imprisonment, but fifteen months later on Halloween night 1756 he made a daring escape which he detailed in his memoirs “The story of my escape from the piombi“. During his daily exercise in the prison attic he found a metal door-bolt which he shaped into a chisel using a small slab of black marble and kept hidden in an upholstered armchair he had been allowed to bring into his cell. His first attempt at escape was to dig through the floor of his cell, concealing the hole with his bed. Just as he was nearing completion, he was moved to another cell and had to bribe and blackmail the gaoler, Lorenzo, to keep his secret and fix the hole. He managed to keep his chisel but Lorenzo checked the walls and floor of his new cell daily making a second attempt using the same technique impossible.

After complaining of a lack of reading material, Casanova was given permission to exchange books with the prisoner above him. By exchanging notes concealed in the books, he and the prisoner, a monk named Marino Balbi, generated an escape plan. Casanova slipped the monk the chisel by concealing it in the spine of a particularly large bible. The monk dug a hole in the floor of his cell, which was the ceiling of Casanovas, and a hole in his wall which he hid behind a religious poster. A few hours after Lorenzo had completed his rounds on Halloween night, Casanova climbed into the monk’s cell and together they climbed out the hole in the wall onto the roof, and by breaking a small lattice window, into another room. From this room they worked their way through various rooms, breaking locks to open doors if necessary until they passed down the golden staircase. They found the main door locked and were unable to break through it. Casanova stuck his head out a window and convinced a man standing in the courtyard that he had been locked in by mistake on the previous day and sent him to get the porter. When the porter unlocked the door, Casanova and the monk dashed out, ran to the canal and jumped into a gondola to Mestre.

Nobody expects an Italian Inquisition
Next on our tour, we passed through the Inquisitors Room (Sala degli Inquisitori). The Inquisitors for the Maintenance of State Secrets (Inquisitori alla Propagazione dei Segreti dello Stato) were a sort of secret police, a shadowy body of three men tasked with protecting state secrets. This is the room Casanova would have dropped into has his original escape attempt been successful, punching straight through the beautiful ceiling of the room, decorated by painter Tintoretto.

But that is nothing compared to the Hall of the Great Council (Sala del Maggior Consiglio), which is absolutely huge and lavishly decorated. It took us a moment to find the frieze of paintings of the Doges, and locate the painted black curtains that are in place of the 55th doge, Marino Faliero. Faliero was caught planning a coup and the black curtains are part of ‘damnatio memoriae’, whereby all traces of a person are expunged from history or memory. Beheading and mutilating him wasn’t considered punishment enough.

This is the last good-sigh
Leaving the Palace, we crossed over the Bridge of Sighs (Ponte dei Sospiri) to the prisons. The bridge was built in 1602, but its current name wasn’t coined until the19th century by Lord Byron. He suggested that prisoners would sigh sadly as they looked out the tiny window at their final view of Venice before being taken down to their cells.  Not sure what name the bridge went by for the first two centuries, but it is one of the most famous bridges in all the city and commands quite a crowd. 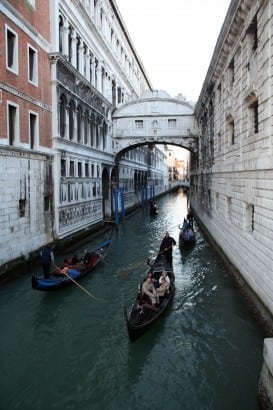 Reaching our daily limit of history and culture we exited, pausing to gaze out of one of the gift shop windows. The window provides a view of the Giant’s Staircase, where the Doges were crowned, partially obscured by the large marble buttocks of a statue of Neptune who stands unaware at the top of the staircase.

What is your favourite part of Venice? Tell us below: