On a long weekend in Florence to get away from his kids and celebrate his wife`s 40th birthday, CHARLIE INGLEFIELD found a city aglow in its glorious past.

‘No Wi-Fi, only wine’ was the very enticing sign at the front of Pangie`s restaurant in the romantic back streets of Firenze, aka Florence to us foreigners. Thankfully, it was discreetly tucked away from the tourist hoards but only a gentle 10-minute stroll from the princely sites of the Duomo.

Florence is famed for culinary gems and Pangie’s does not disappoint; particularly, if you try their chicken liver pate, washed down with an appropriate glass of the many delectable Chiantis which can be found in this wonderful city. In fact, I would love to write a book about the food and the wine if I could, but that would be doing a disservice to the artistic and historic gem that is Firenze. 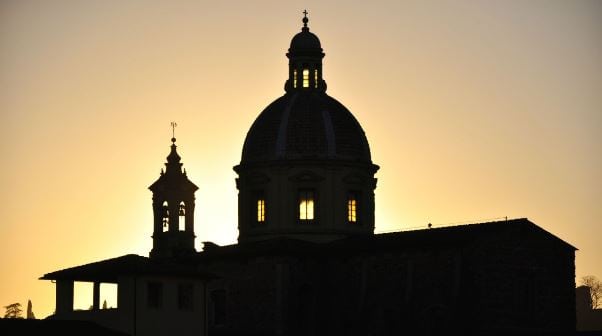 I had wanted to go to Florence for about 20 years thanks to the stories from my sister who studied art history, about lazy espressos during the day and cheerful partying beside the Ponte Vecchio by night. Finally, I found the excuse of my wife`s 40th birthday and a chance to get away from our delightful if exhausting kids for a long weekend.

Our first foray into Florence`s box of artistic treasures was a mixture of angry taxi drivers and some extremely erratic roundabout traffic management. They say Belgium drivers are the worst in Europe but the Firenze taxi drivers definitely challenge them for that dubious honour.

Our hotel was idyllically located on the River Arno close to the Ponte Vecchio but also within sight of the legendary hills of Tuscany. 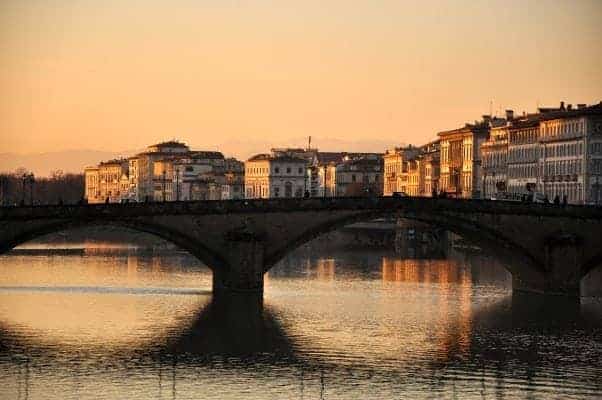 Relaxing into our late afternoon surroundings, one could only do the right thing by settling into a café with a glass of rouge to watch the brilliant pink sunset rising and falling over the formidable San Frediano in Cestello.

The Arno on our first evening was crystal clear, reflecting the indomitable riverside buildings leading towards the world renowned Ponte Vecchio. 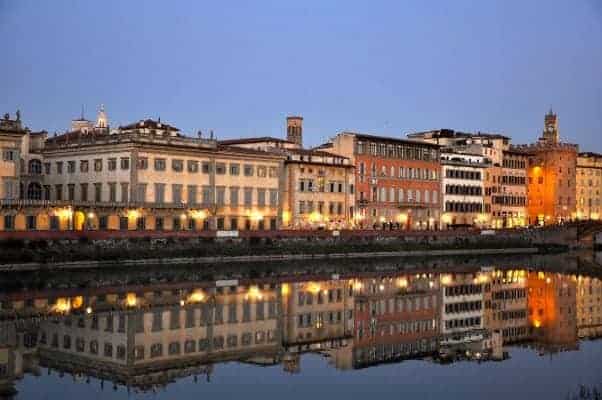 Dip a finger into the Arno and you threaten to ruin a photographer’s dream.

A penis of art’s history

It makes very obvious sense even at this time of year to start early with Florence`s vast array of museums and galleries, as queues build very quickly.

The Galleria Uffizi is a must; it is amazing even for the educationally challenged such as me.

The Galleria dell Academia is what millions of people from around the world come to see year in, year out; as many have put it over the years, it is home to the most sought after penis in the world.  Indeed, on the phallic theme, Florence has many to view among the many statues dotted around the city. Once you get past the juvenile jokes (yes, I drove my wife to distraction with them) about the amply sized marble models, one could not ignore how talented Michelangelo was.

You have to employ gentle but increasingly persuasive shoulder charge tactics to jostle for a position to admire David, surely the most famous statue in the world. There are many Japanese tourists clicking away with their vast array of camera equipment and eventually one has no choice but to politely get them out of the way. 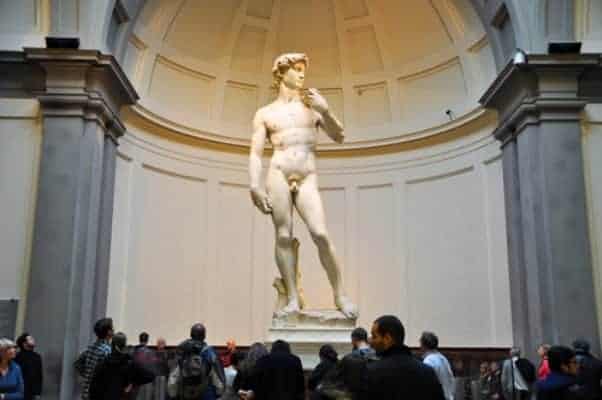 It was remarkable to learn how Michelangelo managed to take a discarded block of marble and spend three painstaking years chipping out his masterpiece.

The David is a symbol of the Renaissance and perhaps the most significant piece of artistry from the last 600 years.  Little would Michelangelo know that many centuries later he would still have his masterwork, complete with a very large penis, on display for all to admire.

Stepping away from the subject of penises… Florence, if you have time, is all about taking lazy walks to truly take in what this city has to offer. I can only think of Paris as a realistic challenger in this respect.

Around every corner is a building to admire, especially if you step off the Piazza della Signoria as a starting point. The fact that it has some very good cafes and restaurants to rest one`s decadent feet makes the sojourn all the better.

The splendid Palazzo Vecchio, one of Florence`s figurehead sites, draws you in from the modern day world we know, back to the 14th century. In those days this street was home to butchers and town folk trying to make a living. Nowadays it is full of over priced jewelry shops.

There are two other must-sees no matter how long you stay in Florence.

The Basilica di Santa Croce at Piazza Santa Croce, is the resting place of Italy`s most illustrious artistic and intellectual powerhouses. Galileo, Machiavelli, Michelangelo and Rossini are just a few who are eternally accommodated here. There are also some wonderful artworks, including frescos by Giotto.

The second is the Duomo; quite simply an extraordinary display of architecture, which struggles to have any equal anywhere else in Europe. 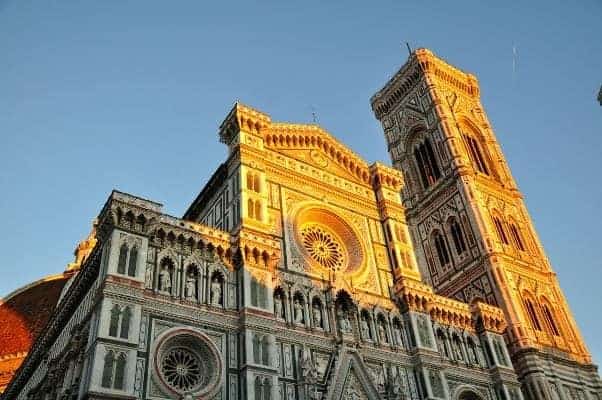 It is the world`s third biggest cathedral behind St Paul’s and St Peters and was built in the 13th century. There is such a blinding contrast of colours, mosaics and designs on the outside that even the most artistically stupid, of which I am a fully paid-up member, can only sit back and look up in awe.

The shopping, the fashion

Firenze is also a fashion icon of Italy, with shops to suit every taste and wallet.

There are of course the Gucci’s, Burberrys and Tiffany’s, but Florence is also renowned for the many chic outlets that sell everything from quality leather goods, shoes in particular, through to sumptuous Tuscan olive oils. You (or your wife) will be richly rewarded walking around the side streets that house plenty of affordable and intimate boutiques.

And of course, the cuisine

Sampling the many different Chiantis from the region and tasting the enjoyments of Tuscan cuisine may sound a bit of a cliché. However, to even get an inkling into the every day life as a Tuscan means enjoying this essential part of Italian life.

We found the Florentines simply delightful. The likes of Alessandro, the head waiter at Angiolino`s on Santa Spirito, is a case in point; a genuine hug, three kisses and a complementary glass of Prosecco just because we had come into his establishment a couple of nights before. Even the Carabinieri (the cops) were relaxed, checking iPhones whilst on duty and throwing approving glances at the many female tourists walking by.

Like most of Italy, Florence is laidback and thankfully they do not take life too seriously, despite life’s glories around them.  If only the rest of the world could be like Florence, life would be so much easier and happier.