A retiring Australian diplomat in southern Thailand has warned young travellers of the dangers of a potentially deadly drug cocktail made from Kratom being sold at popular beach rave parties in the area. 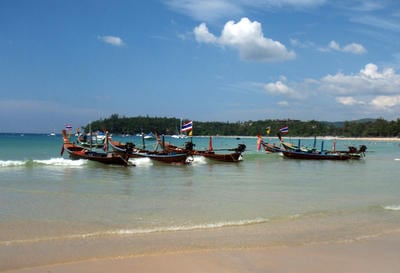 A RETIRING Australian diplomat in southern Thailand has warned young travellers of the dangers of a potentially deadly drug cocktail being sold at popular beach rave parties in the area.

Following eight years in the role as Australia’s Honorary Consul in Phuket, Mr Larry Cunningham has seen for himself the negative effects of a night out at one of Thailand’s beach raves.

In an interview with Fairfax Media on the eve of his retirement on 30 September he warned Thai criminals were targeting young Australians and other foreigners at parties held on islands such as Koh Phangan, where up to 30,000 revellers descend each full moon to drink infamous ‘bucket’ cocktails.

Served in small red buckets, cocktails are often made from the drug ‘kratom’ — a local leaf trafficked by criminals — and sometimes mixed with the insect repellent DEET, cough medicine, cola and ice.

It leaves users vulnerable and stupefied, says Mr Cunningham, and in a position where criminals can take advantage of them.

“Previously the buckets contained mixes like cheap Thai whiskey but now drinkers have no idea what is in there,” he said.

“What do you do if you are out of it from taking this stuff and you are dragged away in the night and raped by a pack of Thai guys?”

Mr Cunningham said victims of crimes such as rapes, assaults and thefts at these rave parties usually fail to report it to police, leaving the extent of the problem largely unknown.

“They are some of the worst criminals in Thailand … rapists, murderers and thieves and some are corrupt police,” he told Fairfax Media.

He cited the example of one young woman who turned up distressed at the Australian embassy in Bangkok in only her T-shirt and bikini, having been raped at a rave party and her valuables stolen before being put on a bus to Bangkok.

“These are dangerous, dangerous places … even groups of revellers are targeted by these criminals,” Mr Cunningham said.

Kratom has been banned in Thailand since 1943, however its use in tourist areas is widespread due to its low cost. Twenty leaves enough to create a cocktail for several people at the cost of AUD$3.

Thailand’s Justice Minister Chaikasem Nitisiri has recently proposed legalising it, saying its use may detract from people using drugs like methamphetamine and crystal-meth.

“Kratom was used as a traditional medicine in the past,” he told Thai journalists last week.

Mr Cunningham owns the five-star Chava resort on Surin beach in Phuket, and plans to continue to spend six months of the year there following his retirement.

The Australian Ambassador to Thailand, Mr James Wise, paid tribute to Mr Cunningham’s assistance to Australians in the area.

“No matter the time of day or night, or the nature of the problem or emergency, Mr Cunningham was willing to help,” Mr Wise said in a statement.

“Mr Cunningham is an enthusiastic advocate for Phuket. He knows that Phuket will prosper only if tourists and residents continue to feel safe and welcomed there. He has worked tirelessly to draw to the attention of authorities any issues of concern.”

Australia has advertised for a new honorary consul for Phuket.

Australians in southern Thailand in need of assistance should contact the Australian Embassy in Bangkok. It can be reached 24 hours a day by calling 02-344 6300.