Cross Continental: Looking for Europe and Australia in Quebec

When I first heard Canadians who had visited Australia compare Montreal to Melbourne, my interest was piqued. It’s not so much that I was looking for the familiar; it’s that a more liberal and less uptight city than my adopted home of Toronto, with student-friendly rental rates and a strong artistic community, appealed. Besides, Melbourne is a pretty great city to resemble.

Montreal is the largest city in Quebec, the bi-lingual eastern province whose capital Quebec City is frequently described as being European. As a Melburnian who has spent most of the last decade in Europe, who better to see if the two comparisons are apt?

Within minutes of arrival in Quebec City, my boyfriend and I were able to confirm that it is in fact luxuriously European in the manner of such chocolate-box towns as Bruges in Belgium, or pretty much any charming place in France. The view from the window in my gorgeous boutique hotel was all but filled with the grand hotel Château Frontenac, the most notable and unavoidable building in the city. Famously known as the only walled city in North America, the historic centre is broken up by a dramatic cliff, meaning you essentially need a topographical map to navigate even a short journey. Or you could catch the comically short hillside lift, which at $1.50 a pop can take you up or down in mere seconds. The first evening’s wandering of the picturesque but conspicuously empty city were put into focus the following day with a tour from seasoned guide Michelle Demer, of the local tourism board. She tells us an awful lot about the history of the city, and the alternating French and British rule; it would seem the two nations squabbled over the city for quite some time. Michelle is extremely knowledgeable about the history and architecture of the city, but the thing that really sticks in my mind is the holy door of the Notre-Dame Basilica Cathedral. Introduced by the Pope to celebrate the Cathedral’s 350th anniversary last year, the door opens intermittently – at the will of the Pope, or on jubilee years. It is one of only seven such doors in the world, and the only one outside of Europe. Walking through the door symbolises repentance, and a renewal of faith. Sealed now for another 25 years, it was pretty cool to be made privy to the magical powers of an ordinary door I would otherwise have walked straight past.

Heading way further back in history, before the Europeans arrived to bicker over the region, is the story of the First Nations people. Though it’s a story that takes up far more words than I have here, what we did have time for was a visit to Wendake, a small area governed by the Huron-Wendat nation just a few minutes drive outside of the city. The centre of tourism in Wendake is an upscale hotel and restaurant called Hôtel-Musée Premières Nations, a strikingly unusual building combining spaceship-modern architecture with traditional wood and taxidermy interiors. Over a lunch of contemporary updates on Huron-Wendat classics (mostly hearty game and fish fare), tourism representatives Jason and Paule filled us in on the area.

Jason explains that the people of Wendake, despite many hardships, have historically been very adept at harnessing their culture into successful tourism ventures, and are well known for producing unique handicrafts and jewelry. Besides the hotel and restaurant, the grounds also boast a fabulous cultural museum and an impressive replica of a traditional longhouse where guests can stay overnight if they wish. 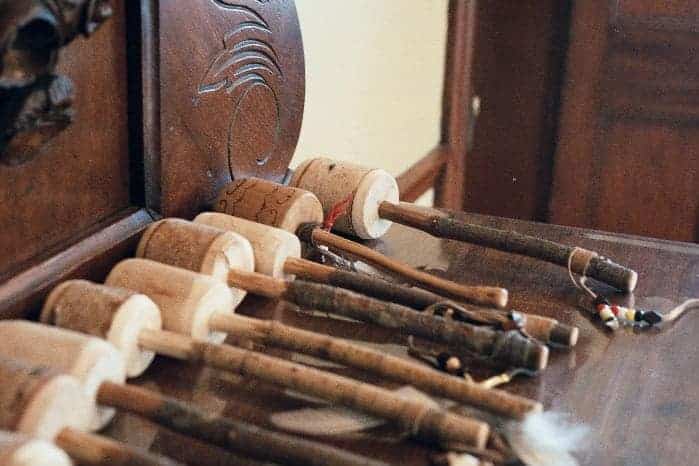 A tour of the rest Wendake reveals a charming village, with cute and colorful houses and bustling river at the edge of it. Outwardly, it’s no different than I imagine any other small Quebec town looks. We visited the local church, which also looks like most little old churches but for one female idol who I’ve never come across before. It’s Tekakwitha, also known as Lily of the Mohawks, a braided and serene young woman who is the first, and currently only, Native American saint.

Returning to Quebec City, we took the afternoon to explore the modern part of the city. Away from the beautiful but somewhat aloof centre, we found bustling Le Sacrilège pub to be the heart of the trendy St. Jean-Baptiste neighbourhood. Not to hammer it home, but the warm brick building just felt so French. However everyone in the place was quick to help us with translations, and so it wasn’t long until we were watching live music and having a great old time, saddled with microbrews and free popcorn.

The area is dotted with the kind of cafes, galleries and delis that mark a young and cool area and we spent a good few hours ducking in and out of microbreweries to sample the local selection. Eventually, when we were hungry, and realised that we hadn’t done any research about where to eat, one of those magical travel moments happened. 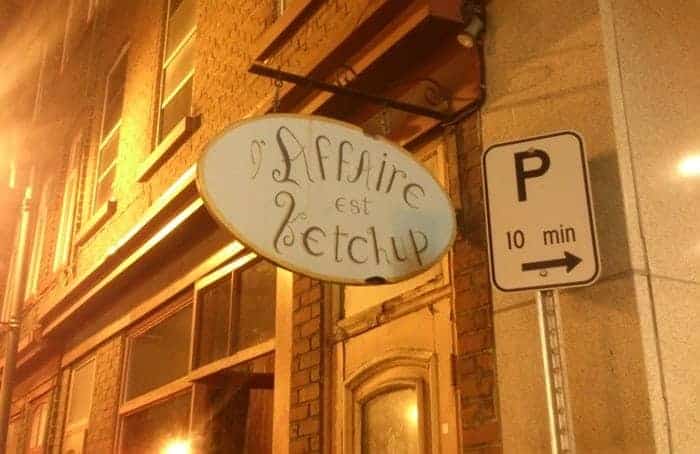 Walking along a decidedly closed-for-the-day 46 Rue Saint-Joseph and contemplating our fast food options (pizza or death?) we saw a faint glow in the distance. As we crossed the road and peered through the window, someone stepped outside, cigarette in hand, and said to us; “Go in, you will not regret it”.

So we went in, and it was marvelous. Candle-lit and about the size of a large living room, the restaurant was homely, rustic and quietly stylish in a way that is very difficult to achieve without looking forced, or messy. The waiter casually dressed in a t-shirt read us the day’s menu in the manner of a man reciting a poem, and recommended pairing wines and beers. But not in a wanky way. Meanwhile the chef, and only other employee present, was at a two-burner stove using what appeared to be some olive oil and a spring of thyme to dish out the most fantastic smelling creations. 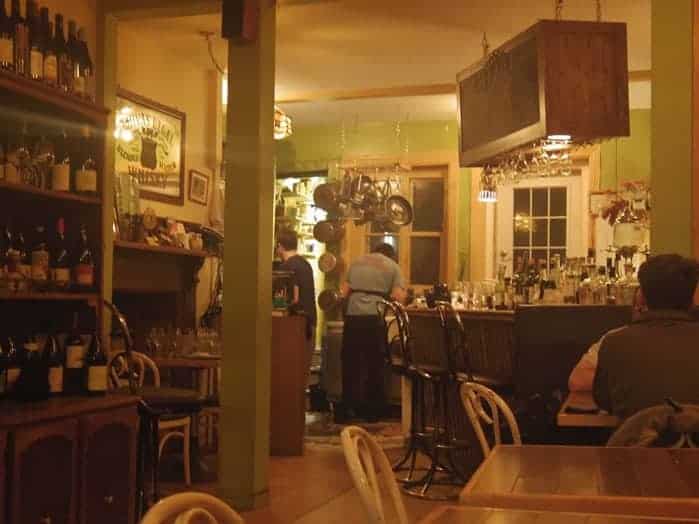 We went with it. It was an amazing, magical, special meal. One of the best ever, and at totally fair prices. We felt like we’ve made the biggest discovery of our lives until we got home and googled the name – ‘L’Affaire est Ketchup’ – to find it is in fact one of the most popular restaurants in town; raved about by Anthony Bourdain and usually booked out.

And so concluded our time in Quebec City, with a mid-morning train to Montreal scheduled for the next day. I left with the feeling that this is a city that is perhaps even better during winter; many of its biggest festivals and events take place then, and there’s a certain cozy romanticism that would be nicely accentuated by a snowy blanket.

As we check out, the hotel receptionist promises we will like Montreal, adding; “It’s much more lively than Quebec City”.

But is it more Melbourne? Tune in for Part Two to find out…

TOP IMAGE: Via Shutterstock.com
ALL OTHER IMAGES: By Gary McGarvey