California: I must be dreaming (How I became a Von Dutch model)

Aussie backpacker Pete Ingham's unlikely tale of how on a random trip to the US he stumbled into photographing and modelling for fashion brand Von Dutch.

by Peter Ingham
in Travel When you head off on a two and a half month backpacking trip to California with absolutely no plans, the mind boggles as to what you may see, who you might meet and what you may experience.  After all, America, and California especially, is the land of dreams. Anything is possible right?

That was the attraction to the place for me. The unknown possibilities. A trip with a plan is like watching the last ten minutes of a film before watching the whole thing.

But if someone told me I would be invited on a five day photo shoot for a large clothing brand, through the Arizona and Californian deserts with international (male) models, all expenses paid and even do some modelling myself and getting my picture used and published by the brand…..I would of laughed.

But hey, this is California right! So with Melbourne weather in May breaking rainfall and cold temperature records, I couldn’t pack my backpack and get to the airport quick enough. The lure of 27 deg C southern Californian weather had me longing for that sun to thaw my frozen bones.

Deciding (on the plane) that San Diego, Pacific Beach, sounded like just the place to facilitate the thawing process, I made a beeline there as soon as I got off the plane.

Two weeks at the Banana Bungalow backpackers Hostel (which is literally on the sand) followed, with more sun, beach, beautiful people, beer, parties, sun, beach and beer than a spring break Hollywood flick could dream up.

Thawed out and liver screaming, I decided it was time to take myself and my new suntan to the lights of Hollywood.

Staying again at a Banana Bungalow Hostel (I’m a glutton for punishment) in West Hollywood, the lifestyle resumed minus the beach. Try having a night off from going out to the bars or playing drinking games at the hostel, and you will be labelled as soft and no fun. Being Australian this just isn’t acceptable. Besides, we have a rep to uphold. 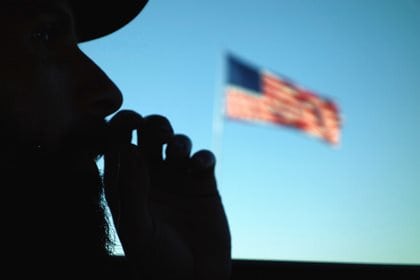 One of many great things about travelling solo and staying in hostels is the weird and wonderful people you meet. A plethora of nationalities and personalities, all with their own unique story and reason for being where they are.

About a week into my Hollywood stay, having done the predictable cringe worthy stereotypical tourist thing (read walk of fame, Hollywood homes tour, Hollywood sign etc), a number of us from the hostel headed out to the usual seedy but uber cool bars on Hollywood boulevard. One of the new members of the hostel gang was an Englishman from Bristol with a self proclaimed accent that made him ‘ sound like a farmer’. Covered in tattoos, large earrings and one of those beards that all the cool people are sporting, turns out he is a published alternative model back in the UK. Several (dozen) drinks later he drunkenly mentions to me he has a meeting the following day in LA with the head of clothing brand Von Dutch to be the face of their global brand relaunch. Suitably impressed I joked I should come along and pretend to be his security.

I’m still not sure to this day if they believed our story that I was security, but the Von Dutch people had me sit in on the meeting and included me in discussions.

So they like John and offer him the gig and tell him they are shooting in Arizona the next day. At this stage the green eyed monster inside me was quietly rolling its eyes. “And what are you doing for the next week Mr Security man?” the Von Dutch photographer asks me.  This is turning into a perfect example why travelling without a set plan pays off. “We could use you in a few shots; you have a kind of angry biker look”. Not knowing whether to take this as a compliment or be insulted, I felt like finding the nearest mirror and looking to see if his observation could be correct. Is that how people saw me?!

So pack our bags we did, both buzzing about what had happened. But both for different reasons. John because he is a model and had just picked up the best modelling job of his career, and myself because, well, I’m not a model and was going on a Von Dutch photo shoot. We were joined by another male model called Ajdin who is an underwear model and is the main guy in one of Lady Gaga’s video clips. Leaving the LA traffic and mayhem, the road slowly opened up, the temps got higher (45 deg C in Arizona), and the landscape morphed from grey concrete to green vegetation to brown rocky open  desert, punctuated sporadically by flashes of green cactus and huge white wind turbines. Roads that I swear they simply couldn’t be bothered to put bends in. Arriving in Phoenix we were fed and housed in five star style, definitely a stark contrast to the backpacker hostel bunks, fast food and cheap beer lifestyle I’d been living.

Von Dutch, or Kenny Howard which was his real name, was born in 1929. He was a famous artist, pinstriper and custom hot rod and motorcycle builder. He worked on many movie sets including numerous Steve McQueen films. Living out of his bus which was part accommodation and part mechanical workshop, he shunned the fame and money and sort to live life on the edge of poverty. Money was a distraction to his art. Dying in 1992, his imagery and cult status was the catalyse for the Von Dutch brand as we know it today.

His bus is held in a museum just outside of Phoenix Arizona, a shrine to the legend he is today in the Kustom Kulture world and this was the location of the first shoot on the trip.

Looking like Yosemite Sam and carrying a loaded .45 in a flimsy holster, the man who owned the Von Dutch museum was quite the caricature.

“So why do you carry that gun” I ask, expecting a ‘mind your own business’ kind of response. “Everybody in this town carries, so as when them ‘moslums’ come and invade this country, we can defend ourselves”, “plus there is no crime in this town because everyone is armed”. Sound logic in theory I thought at the time, although the blistering 45 deg C heat could have clouded my politically correct judgement. Photo shoot one done and dusted, dust being the operative word. Hitting the road again, this time definitely off the beaten track, down dirt tracks across terrain which make the mad max film locations look like Manhattan. Vultures circling overhead whenever you stop and get out, probably salivating at the mouth (beak?) at the prospect of one of us kicking the bucket and providing a substantial meal for them. John, being an Englishman, struggled in the heat and was probably the closest to being vulture cuisine.

Eventually arriving at the ghost town of Hackberry, Arizona, we stopped at the historic Hackberry General Store, a nostalgic and famous stop off on a Route 66. If it wasn’t for the ultra modern camera gear, lights and cars we arrived in, you would not know it was 2014. Or even 1945 for that matter. This place is like an unburied time capsule. As authentic as if you had just stepped out of a time machine. The extent of the collection of old cars, petrol pumps and motoring brand signage was mind blowing. More photo shoots ensued in the following days, including an amazing automobile ‘graveyard’ out in the Californian desert. Searing heat and dust by day and being treated to five star luxury at night.

Eventually I was getting sore from pinching myself. How was I living on a shoestring budget in a backpacker’s hostel one minute and living the high life, being involved in and even modelling for a world famous clothing brand the next?!  Ow that’s right, I was in California.