Budapest: what makes the pearl of the Danube so romantic?

Castles, parks and the Danube: Juliette Massardier discovers the history and charm of Budapest.

by Juliette Massardier
in Travel

Budapest, ‘the Pearl of the Danube’, is the cultural and political centre of Hungary and one of the most attractive cities in Eastern Europe, offering much more than just an attractive cityscape.

Only a 2-and-a-half hour flight away, a week or long weekend here is a rewarding romantic experience for many reasons.

So what makes Budapest so romantic?

Is it its river?
The deep blue Danube cutting through the city centre underlines a beautiful horizon often filled with dramatic clouds while the spanning bridges, like the impressive Széchenyi Chain Bridge, invite the visitor to stop, contemplate and daydream.

Is it the light?
The morning mist rising over the river is spectacular, and at night the city lights glow radiantly, as if from behind a window on a rainy day, bestowing a magical aspect on the place.

Is it the old touch?
The ancient and magnificent buildings, such as the striking neo-Gothic Parliament Building (main image, top) – the largest building in Hungary and second largest parliament in Europe – create a vividly shaped tableau above the Danube, much like London’s Houses of Parliament do so over the Thames.

Is it the green areas?
While the City Park hosts the enchanting Vajdahunyad Castle and the mysterious Anonymus statue, Margaret Island’s dramatic Music Fountain encourages you to stop and stare, before floating away on a contemplative cloud.

Or is the Castle District?
The most romantic part of Budapest has to be the historic Castle District. Situated near the extravagantly-coloured roof of Matthias Church is a charming neo-Romanesque terrace on Castle Hill called Fisherman’s Bastion, which offers a panoramic view of the whole city, while its towers and stairwells evoke a dazzling fairytale palace.

A residing statue of two monks, one of them pointing at the horizon, invites you to look in that direction and, I indeed could have remained there for hours gazing into the Pest bank and the distinctive outline of the Parliament, which looks more like a basilica rather than a political building.

For all these reasons and more, Budapest is truly a romantic city.

On my first morning I took the tram, an iconic mode of transport for the Eastern European capitals, and ever reliable for exploring the city.

Nevertheless, I soon decided to escape the crowds and switch to the footpaths winding along the banks of the Danube, upon which I realised that wherever you look there is always something to see here.

High on the Buda bank stands the Liberty Statue, dominating the horizon like a guardian of the past, holding a palm leaf in remembrance of the Soviet liberation during WWII.

And further down on the Pest side of the Danube Promenade, you unexpectedly encounter a row of dozens of pairs of shoes cast in iron along the riverbank, some of them holding flowers and surrounded with candles.

They are a sombre memorial for the Hungarian Jews who were lined up and shot into the river by the Nazis, leaving their shoes on the bank behind them.

I swiftly became familiarised with the city, moving from one side of the Danube to the other, from my sumptuous residence (yes, I stayed at the Hilton – not as expensive as you may think) in the Castle District, discovering peaceful pathways overlooking the surrounding hills, to the Parliament complex, even though one could admire its dramatic outline from nearly everywhere in the city.

After crossing the Chain Bridge, guarded by its imposing lion statues, my longest walk took me to many impressive spots on the Pest side. 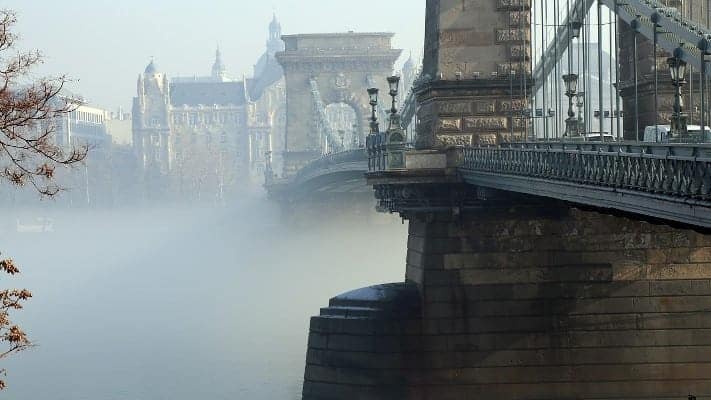 Firstly, the Gresham Palace Hotel, a masterpiece of Art Nouveau architecture which you can freely enter and explore; then the relaxing pedestrian thoroughfare leading up to the massive St. Stephen’s Basilica; and finally, at the end of the long and wide Andrássy Avenue, the proud statues of Heroes’ Square depicting outstanding figures of Hungarian history.

The square is handily situated at the gates of the beautiful City Park, home to a romantic castle and the Széchenyi Medicinal Bath, one of the numerous popular thermal facilities.

For me the longest lasting memory I will keep from Budapest are the Jewish shoes sitting poignantly along the Danube bank, which affect you more deeply amidst the surrounding beauty of the riverbank and its historic buildings.

This rich heritage is ever present, from its thermal baths tradition dating from ancient times, to the commanding communist statues that appear in strategic points around the city, and remarkable religious buildings like Matthias Church with its impressive roof of coloured tiles.

There is something to see and do wherever you go, and with prices remaining low and affordable it is as much a suitable weekend destination now as it always will be.