An introduction from our new fortnightly travel columnist

ITCHY FEET | For the next two months, I’ll be living on the island of Santorini, dodging quad bikes and raki and embracing nights spent dancing to the bazouki stylings of Simon and Garfunkel. 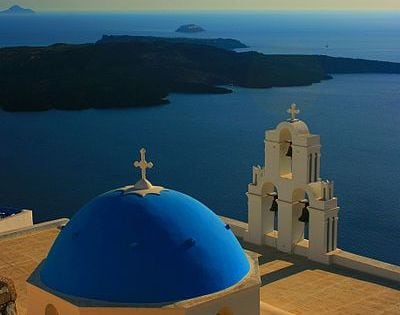 I SUPPOSE, before I start bailing you up with fortnightly tales, I should introduce myself. I’d also like to, simultaneously, retain a touch of mystery. Given you’ll be privy to my innermost thoughts, and given that, to be honest, it‘s never that interesting hearing other people‘s bios, let‘s keep this brief.

I’m an Australian, living in Germany. For the next two months, I’ll be living on the island of Santorini dodging quad bikes and raki and embracing nights spent dancing to the bazouki stylings of Simon and Garfunkel (a fantastic genre-mash up discovery). I shall hoard stories (and trust me, on this island, there is never a shortage of stories) and share them with you. Deal? Upon my return to Germany, the themes may change somewhat – I’ll be dodging bicycles and bernerwurst and embracing nights spent dancing to 90s pop … it’s a German obsession – but the concept will remain fundamentally similar. Hoard stories. Share.

I first came to Santorini in 2007, as part of my obligatory post-university-around-the-world-trip, and, to be perfectly candid, I don’t think I left the square kilometre that encompassed our accommodation, the patch of beach we frequented by day and the bar we frequented by night. But the bar we frequented by night was to play a key role in facilitating what would become one of the defining relationships of my life. The owner, a British woman who had thrown in her London life and leapt into the warm embrace of the Greek islands told us all (me and my two companions) that should we want it, a job was always available at the bar.

I returned the following summer, 2008, with a bag and my laptop. It was a tumultuous two months, rife with drama, alcohol and a personality clash with a colleague that ended in some sort of fisticuffs (honestly, it was ridiculous). This didn’t stop me from reappearing in 2010, after I’d left uni for good and was on my way to relocating to Germany. I was robbed (Santorini’s police station is … sparse) jumped off a cliff and spent some time in a haunted cave house (whilst searching for a new room … obviously). And here I am again. Bag and laptop. Back in a bar, to pay my rent and fund my carafes of white wine, whilst I scour the island for its characters and stories.

There are loads of us Aussies doing it. Our accent is absolutely everywhere (much to my chagrin, I cannot lie … but that’s another story for another day. I have time. And column inches.) Working a summer on a Greek Island seems to be becoming just another Australian rite of passage. To wit, I may come across as jaded at times, towards my fellow countrymen. But I assure you, beneath the tired tone, lays a lot of love. Remember that. You might need to.

And Germany, you may ask? Why Germany? On the same 2007 trip, I visited a beautiful university town in the North Rhine Westphalia state, by the name of Muenster, and knew that I’d be back; it was just a matter of when. I loved the people, the city and I think if I’d decided to move to Greece post-uni, my parents would have had a heart attack (‘if you get sick on Santorini Livvy, do not visit a hospital there. Fly to Germany.’ As it transpires I did a solid stint in a German hospital and it was an excellent, efficient experience. I am yet to road test Santorini’s facilities and am madly touching wood as I type this.)

So, my frappe is calling. I must away. If, over the next week or so, any of you feel compelled to email with your own experiences or observations, you must know I pretty much spend my days refreshing my inbox. What I’m saying is, write to me. We’re in this together.

Encounter Liv Hambrett every fortnight here on the Australian Times website and in the Travel pull-out in the newspaper. Also see her blog www.abiglife.wordpress.com and follow her at www.twitter.com/livwrites