Torah Bright narrowly missed the gold in the women’s snowboard at the Sochi 2014 Winter Olympics but says: "I don't care about the colour of the medal. Life isn't about winning.” 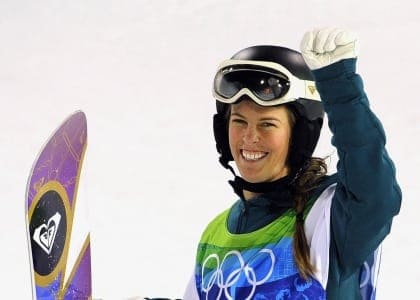 Torah Bright took out silver in the women’s halfpipe at the Sochi Winter Olympics but says it feels like she won gold.

The Australian snowboard champion missed out on defending her Vancouver gold medal by the barest of margins, just 0.25 points. Some commentators say she deserved the gold.

Speaking to Channel Ten after the event, a gleaming Bright asked, “What’s 0.25?”

“I really don’t care, because that happens in judged sports. But it was awesome to hear from my fellow shredders that are now here doing TV work that maybe I should have won.

“I don’t care about the colour of the medal. Life isn’t about winning. It’s about putting your best step forward. It’s about sharing your light. I’m happy.”

Torah Bright secured the silver with her second run of the snowboard halfpipe final after crashing out in the first run just like four years ago.

“When I finished the first run, I was like, ‘Really? I did this again to my friends and family again?'” she said. “I put them through the wringer again? That’s what I was honestly was thinking. Sorry guys.”

“I feel great, I feel like I won,” Bright beamed. “I’m so excited … I’m a clutch performer, I pulled it out, luckily.

When asked who she’d won the medal for, Torah Bright said: “It’s for Australia, for sure. It’s for my family, it’s for my brother.

“It’s for everybody that takes joy from what I do.”

She also then dedicated the silver medal to her two friends, whose baby was stillborn shortly before the start of the Sochi Winter Olympics.

“I hope Andy and Neena heard me saying I was shredding for Indira,” Bright said.

“It’s for everybody that has cared for me and helped me through my life.”

Along with her Vancouver gold, the Sochi medal now makes Torah Bright Australia’s most successful woman Winter Olympian, surpassing the gold and bronze medals of skier Alissa Camplin who finished her career with gold and bronze in the arial freestyle.