Australian Formula 1 driver Mark Webber is quitting at the end of the season to join Porsche’s new sportscar program. 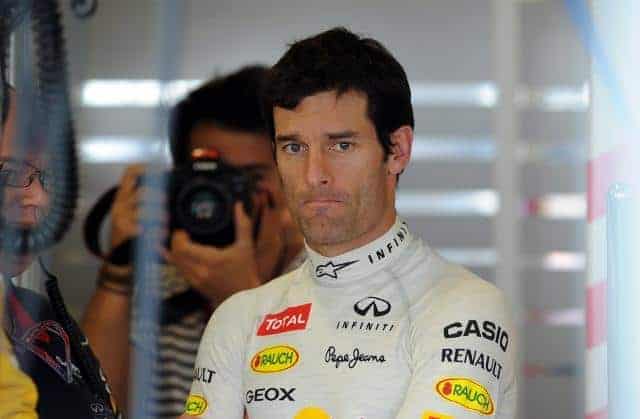 RED Bull driver Mark Webber has announced he is leaving Formula One at the end of the 2013 season.

After 12 years in F1 racing Webber said he felt like it was time for a new challenge.

The 36-year-old Australian will joining Porsche’s new sportscar program and will compete in the classic Le Mans 24 Hours race.

Webber said Porsche has “written racing history as a manufacturer and stands for outstanding performance and technology at the highest level.

“I’m very much looking forward to this new challenge after my time in Formula One. I can hardly wait to pilot one of the fastest sports cars in the world.”

Webber has been racing Formula One since 2002, and in this time has won nine grands prix, achieved 36 podium finishes, 11 pole positions and 15 fastest laps and twice finished third in the world championship.

His time with Red Bull has been characterised by a difficult relationship with racing teammate and three-time world champion Sebastian Vettel.

In this season’s Malaysian Grand Prix Vettel ignored a direct team order not to overtake Webber to win the race.

The German initially apologised, but subsequently said he would do the same thing again.

Toro Rosso’s Daniel Ricciardo and Jean-Eric Vergne are also considered candidates for a spot on the Red Bull team.

Webber still has to see out the rest of the season, including the British Grand Prix set to take place this weekend. Webber’s last victory was last year’s Grand Prix at Silverstone and he is looking to score back-to-back wins.

”I love racing at Silverstone,” he said. ”I’ve had a fair bit of success there over the years and my win last year was particularly satisfying.”