Ashes moustaches: the best 11 lip ticklers in the history of cricket’s greatest contest

Bring back the 'tash! So often the greatest moments in Ashes cricket history have been accompanied by a sensational moustache... 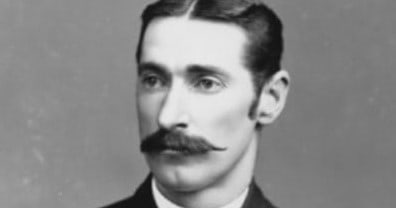 With over 137 years of history behind it, the Ashes have brought about the toughest and most engrossing cricket battles. It’s also borne witness to some of the all time greatest sporting moustaches.

With the 2019 battle for the little brown urn set to get underway this week at Edgbaston, scene of England’s semi-final slaying of the Aussies on their way to fluking a World Cup, we find ourselves asking: sure there’s the odd bit of facial grit among both teams, even a couple of beards, but where are the true Ashes moustaches?

We think both teams would do well to take a look back through this list of  11 legendary cricketing lip ticklers if they have any sense of history and duty to the great game.

The only thing on a cricket pitch bigger than Big Merv’s heart and more terrifying than his steely glare was his incredible ‘tache. Insured for a grand sum of $370,000 at the height of its powers, the beast is a legend in itself… and it’s Victorian. 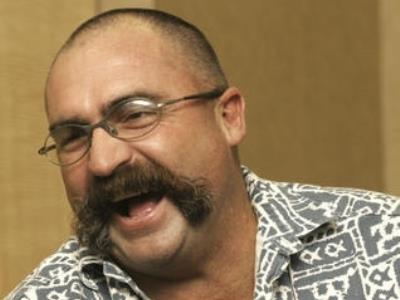 Amongst their many feats, Merv and his fearsome facial wear took 31 wickets against England in the 93 Ashes series. While the enigmatic paceman and master cricket sledger has long since hung up his boots the moustache continues to strike dread through an Englishman’s heart to this very day.

The keg on legs. The five-foot-two Tasmanian with the flared pants. After four Ashes wins, it’s clear that Boonie wasn’t just amazing at growing moustaches. 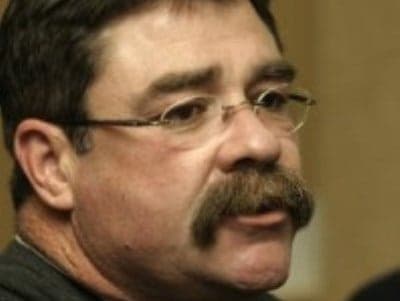 His Ashes debut was disappointing but Boonie’s Test cricketing career went on to span from 1984-1995, accounting for over 7000 runs, five wickets (crackers, every single one of them), 99 catches – making the fielding position of short square leg (those flared pants) his own – and a record sinking of 52 cans of full strength lager beer on the Sydney to London flight.

That hairy caterpillar on his top lip wasn’t weighing him down; nay, it was his – and our – inspiration.

The Essex-born cricketer was one of the most successful international batsmen of his generation. He scored over one hundred first-class centuries in his career, and became captain of England after their disastrous 1989 Ashes defeat. 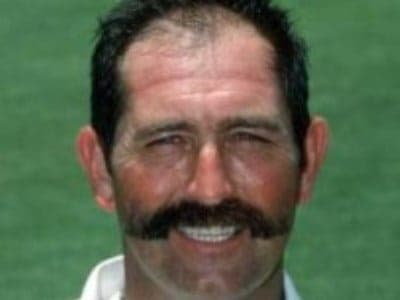 Gooch and his moustache went on to play for England until 2000, with Gooch becoming the country’s leading run-scorer during the 1993 Ashes series. Needless to say, an epic moustache aided him in every single run. Though more of a piece of art than just some facial hair, the attention to detail is second to none.

Rod Marsh is an iconic figure in Australia cricket, known as much for his larrikin attitude as he was for his ripper facial follicles.

On his debut in the 1970-71 Ashes series, Marsh took four catches in the first innings without once being distracted by the thick foliage on his face. In the 1981 Ashes series he became the first keeper to take 100 wickets in the Ashes, cementing his furry face in the series hall of fame. The wicket-keeper was an impressive addition to the Australian side, retaining a 15-year career in Test cricket. 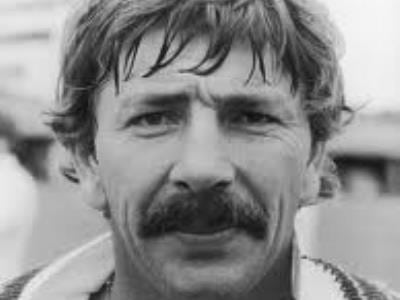 Marsh had a moustache that you could follow through time. Starting thick, brown and long, with the perfect curve, it has since become much shorter, greyer and more refined .. befitting the lips of a national selector.

There is no question about it: D.K. Lillee was the most outstanding fast bowler of his generation.

The Perth-local made his debut in the 1970-71 Ashes series (at the same time as previous ‘tash-tacular entrant Rod Marsh). Wicket-keeper Marsh and fast-bowler Lillee became one of the most devastating combinations in cricket history, with the first player to be “caught Marsh, bowled Lillee” in the seventh Test of the 1970-71 series. 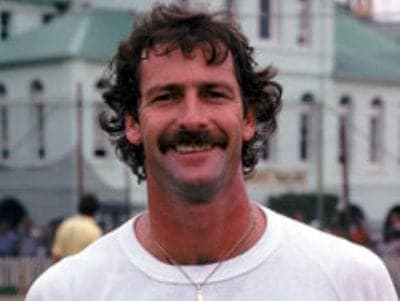 Was it their shared love of facial decoration that brought Marsh and Lillee together? We may never know, but what is certain is that the two men dominated the Australian cricket scene without putting so much as a whisker out of place.

Border’s facial hair was much more swift and stilted than his Aussie teammates. The impeccable ‘stache matches his well-groomed cricketing career, holding the record for the number of consecutive Test appearances (153) as well as the number of Tests as captain. That’s a record that cannot be broken. 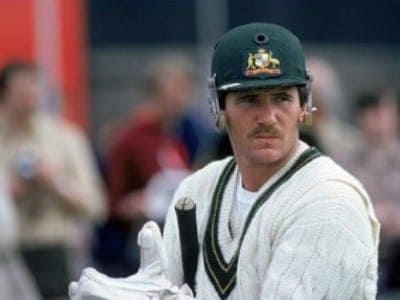 Border made his Test cricket debut in the third Ashes match of the 1978-1979 series. He took half an hour to make only three runs in his first Ashes clash, however he and his well-trimmed ‘tache were in a class of their own as top-scorer in subsequent matches in the series.

A.B. is a legend of cricket, although we kind of wish that the Allan Border Medal had a moustache requirement attached.

Everything we know about the greatest contest of all, the battle for the urn, was founded by Fred Spofforth. What didn’t this Ashes immortal pioneer? The bowler’s glare, the slower delivery, the first ever Test hat-trick, the metro-sexual cricketer (just look at the product in his hair .. it’s even in his moustache! Damn, judging by this photo, this guy even discovered Blue Steel), devastating rifts with players and selectors, and indeed the very Ashes themselves – this bloke and his moustache started it all. 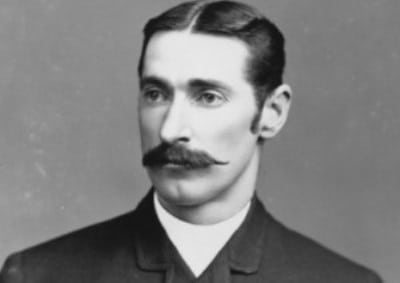 According to Sport Australia’s Hall of Fame: “his swarthy complexion, black moustache and steely brown eyes combined to convey the unmistakable aura of hostility”. Legend even has it that Spofforth could throw a fresh egg over fifty meters and have it land without cracking, such was his other-worldly control over rounded objects. After confronting him in the middle, England’s Billy Barnes recalled: “Spofforth was no bowler; he were a hypnotist.”

Fred ‘The Demon’ Spofforth was already the cricketing world’s most talked about player when in 1882, at The Oval, with England chasing a measly 85 to win and having never lost on home soil, he furiously and defiantly declared to his Aussie team-mates: “Boys, this thing can be done!” The poms were duly skittled for 77, Spofforth leading the charge with 14 wickets in the match. Australia won by seven runs to claim the soul of English cricket; and so the ‘Ashes’ were interred in to sporting lore .

Fred, his legend and his glorious mouth warmer still have us entranced 137 years hence. No list of great Ashes ‘taches would be complete without including The Demon. In fact, if we were to rank these Ashes moustaches we think he is the prime candidate for top spot.

There isn’t much Max Walker couldn’t do. Cricketer, AFL player… even architect! Not to mention a tough contestant to beat in a moustache-off. 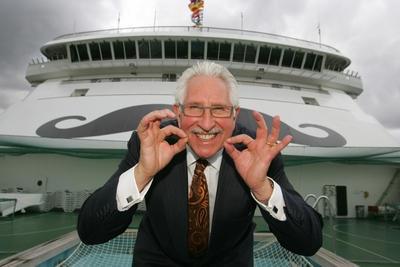 Walker’s moustache wasn’t the only thing that was at risk of being tangled: his strange footwork on the pitch gave him his nickname of Tangles. Max’s Ashes claim to fame came when he got eight out for 143 in the sixth test of the 1974-75 series.

He has taken his ‘tache to the greener pastures of media work these days, so we have certainly not been deprived of one of the sport’s great lip-ticklers.

A moustache with a personality isn’t all Jack Russel had to offer the English cricket team. The wicket-keeper also knew exactly how long the optimum time to soak your weeta-bix was — 8 minutes to be precise; an eccentric character to say the least. 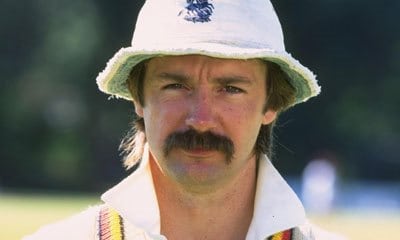 Being snubbed from the 1998 England Ashes squad was the final straw for Jack, and he quit representative cricket as a result. He was never much of a team player, however perhaps it was not his eccentric nature that was to blame: Russell had one of the best ‘taches in the game, sure to make the bare-faced English players green-eyed with envy.

Short and tight: the characteristics of a moustache trimmed with military precision like Allan Lamb’s. 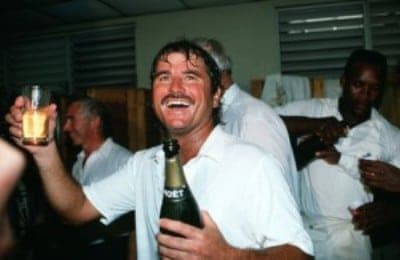 Exemplifying the fine tradition of great South African / England batsman, Lamb made his cricketing first team debut at the tender age of 18 for Western Provence in the Currie Cup before heading onto bigger and better things in the United Kingdom. He played for England in two successful Ashes campaigns (1985, 1986-87) and eventually went on to captain the team.

His only Ashes century came in the unsuccessful 1989 Ashes series, however he scored 1138 runs across the 20 Ashes matches that he played in throughout his career. His knocks are hard to remember, but that ‘tashe is one still savoured by true connoisseurs of the artform.

Of course we wouldn’t leave him out!

After a sensational early career, our dear Mitch lost his way a bit until another Australian moustachioed cricketing god from Western Australia, a certain Mr D K Lillee, grabbed him by the scruff of the shirt told him: “boy, grow a bloody moustache.” Seriously, that is just about true.

As well as his mo, Lillee also showed him how to get his bowling mojo back.

With both, Mitchell returned to the splendid white of Test cricket to demoralise and demolish England in the 2013/14 Ashes in what can only be described as one of the most terrifying stints in the history of the game. He laid waste to a champion team, ending the Test careers of more than a few of them along the way, en route to a 5-0 series whitewash for Australia.

The Ashes ‘tash was back, and oh it was glorious!