Australian ski cross exponent Scott Kneller has overcome a lot to get to Sochi.

by Glenn Cullen
in Sport 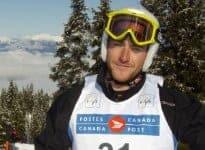 He’s had the toughest road of any of Australia’s Winter Olympians but Scott Kneller is simply looking forward to getting the job done.

By all rights ski cross exponent Kneller shouldn’t be in Sochi.

In December the 24-year-old broke his back training for a World Cup event in Italy.

The high-speed accident also left him with a hematoma on his left lung and an inability to travel for two weeks.

“I broke the transverse processors of my L1, L2, L3 and L4 on the left side of my lower back, so it is has been a long road,” he said in the lead-up to his event on Thursday.

“The last two months have been pretty hectic and full of intense rehab but I am doing good now.

“When I was in the hospital I thought I was done. I was in a bad way. I thought it was all over.”

Not only did he have to pass a fitness test but Kneller had to walk something of a qualifying tightrope as well.

With some events cancelled he managed to stay inside the ranking cut-off zone.

But it wasn’t the only thing to take a massive dent out of his campaign in the lead-up to the Games.

In April last year his father Rob was killed in a tragic vehicle accident in the NSW Snowy Mountains.

Yet even after that tragedy Kneller was determined to make a positive out of it.

He and his brother Luke have started the Rob Kneller Youth Foundation, raising money for more children to ski in the NSW Snowy Mountains.

“There are a lot of local kids that don’t get the opportunity to ski. It is an expensive sport,” said Kneller, who was a surprise seventh in his event in Vancouver four years ago.

“Luke and I have had so many opportunities through the snow sports industry and I want to be able to present those to the young kids of Jindabyne and make sure everyone else has the same opportunities.”

To raise money for the foundation, fellow ski cross athlete Anton Grimus, known for his Ned Kelly-esque beard, will shave it off on Saturday.

Meanwhile Australia’s best chance to sneak another medal goes on the line on Thursday when skier Amy Sheehan tackles the halfpipe.

Sheehan has captured two World Cup podium finishes with a late surge in the 27 year-old’s career.