OPINION & ANALYSIS: With the values of the Baggy Green forever tarnished, the book must be thrown at Steve Smith and his team over the ball tampering outrage, writes Charlie Inglefield. 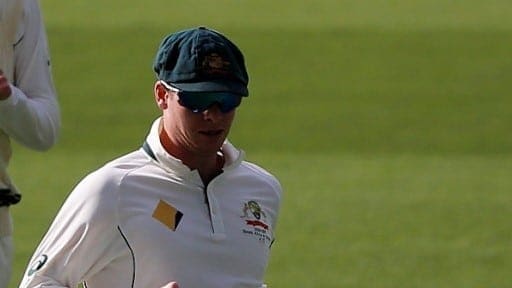 Listening to the great Jim Maxwell in tears whilst commentating at the start of play the day after brought home the seismic impact of Steve Smith’s actions on Saturday. Maxwell does not soften easily, and his commentary is respected all over the cricketing world particularly in England, Australia’s arch sporting enemy. There will be many accusations and feelings of disappointment over the coming days but if you ask pundits this side of the pond, it is the disbelief that Australia’s cricket team actually sunk as low as cheating.

The values of the Baggy Green forever tarnished

Having grown up in the early 80s listening and reading about the great Ashes series of the past, the passion and pride that the Aussies have when wearing the Baggy Green, this was truly the last thing any of us would have expected.

Ask most schoolboys and girls down under what they want to do when they grow up, many of them would say ‘playing cricket for Australia’. It is not quite a religion but it is not far off it and Australia happens to be bloody good at it. Having lived in Sydney for five years, when a Test match was on it was the talk of the office, the pub as well as in the stands. Cricket is everything in Australia and the people quite rightly expect their team to uphold and exceed the expectations of wearing the Baggy Green. Yes, of course we have had the larrikins led by the indomitable Warney but look at what the great Victorian achieved, and he was still the last one back from the nets before he went to the bar.

That is what makes this episode so damning not just for the Australian cricket team but also to the wider game. There are many angles to this but for me perhaps the saddest is: Just why would Steve Smith instigate such a maneuver? By all accounts Smith is a delightful presence off the field, a lover and student of the game as well as being the best batsman in the world. The guy had everything before him and he will now be remembered as the Australian cricket captain who brought cricket to its knees. Like most people, my only question is: Why?

Why did Steve Smith and the leadership team feel the need to cheat? They were in the game at that stage and with one of the best, if not the best, bowling attacks in the world.

Why so calculated? This was a genuine plan, agreed by the top brass in the team, with the aim of getting an unfair edge on South Africa.

It is simply incomprehensible that some of the best players on the planet felt the need to do this; did they really think that they would get away with it? With all the technology and cameras that are available these days, they were always going to get found out.

Up until the fateful Saturday, this series between the Proteas and the Aussies was one of the best in recent memory. It had everything: controversy, top quality individual as well as team performances, spite and fire. All these ingredients combined to give the viewer a fabulous spectacle. It is such as a shame that the impressive win that the South Africans, with Morne Morkel in particular, completed on Sunday will be forever overshadowed by the ball tampering scandal.

There is a feeling, albeit a weak one, that Australia were backed into corner during a tough tour on and off the field by a fiery South African public. It is difficult for Australia to make excuses around the treatment and abuse being dished out to players by the opposition as well as the public. Admittedly, it was not nice seeing a spectator dish it out to Dave Warner while he was walking back to the pavilion having been dismissed by Kagiso Rabada during Australia’s first innings.

No excuses, you reap what you sow

That said, such is the aggressive and provocative manner that the likes of David Warner portray on the pitch, it was inevitable that Warner and the team were going to cop it.

It is not like it is easy as a cricketer when touring Australia. Even playing village cricket in Sydney’s suburbs, the barbs one receives are of a personal nature but generally it is just banter and all good fun. Being an Englishman in Australia and as an Australian for that matter in the UK, it comes with the territory; you are going to get abuse and a lot of it would be considered ungentlemanly.

The point here is that the general message or feeling coming out of Australian cricket is that they are always aggressive and are always playing right to the edge of what is deemed acceptable. Therefore, complaining about comments coming on and off the field doesn’t fly when you adopt such an aggressive approach yourself.

All we have heard from Darren Lehmann and the players in recent times is making sure they don’t cross the line when it comes to sledging. In the first Test, the way Nathan Lyon dropped the ball on AB De Villiers when the latter was run out, together with David Warner’s aggressive send-off and the way Mitchell Starc kept up his running commentary on South African all rounder Theunis de Bruyn at the very least pushed that line to the limit.

These incidents have not endeared the Aussies to the South African team or the public, no matter how hard they want to play the game. Granted that South Africa have been no angels in this series either but time and time again over the last ten years we have seen Australia aggressively ‘talk’ to the opposition. Frankly, there is little sympathy from anyone whether it be in Cape Town or Sydney.

The book has to be thrown at Steve Smith and his supporting cast. There are also serious questions marks over the management for allowing an environment to foster such ridiculous thinking. Steve Smith and David Warner were forced to stand down from their respective captaincy and vice-captaincies on Sunday and Smith has already been served with a fine and ban for the final Test while the patsy, Cameron Bancroft, has also copped a fine. Cricket Australia are conducting their own investigation and you must think the repercussions for those players and others won’t end there.

Smith could have been one of the great captains and time will tell whether he fulfills his undoubted talent with the bat. As for Warner, who knows, this may be the end of the road so far as Test match cricket is concerned.

This is up there with the darkest events in Australian sport. Considering the many great teams and individuals that Australia has produced across so many different sports, the Australian cricket team, until now held up as the pinnacle of all those, can only remove their baggy greens and hang their heads.