Idyllically located on Lake Zugersee between its two more illustrious neighbours, Lucerne and Zurich, Zug has more to offer than people like me perhaps initially thought. 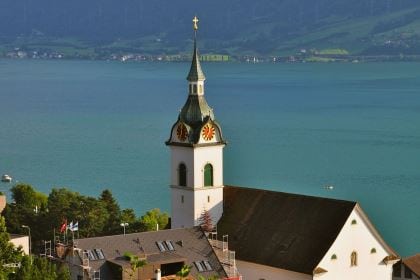 We are moving to Zug? You mean Zurich? No?

I knew less than a little about Zug before my wife mentioned to me in May that her company was relocating their headquarters from Nyon near Geneva to this pleasant little lakeside town near Zurich. My knowledge consisted of a company called Zug which made quite posh kitchen appliances. That was it and actually it sums up Zug quite well; people know of it but not about it.

Idyllically located on Lake Zugersee between its two more illustrious neighbours, Lucerne and Zurich, Zug has more to offer than perhaps people like me have initially thought.

Researching Zug prior to our move revealed some interesting facts. Zug is renowned for its cherries. Every time you drive into Zug you are welcomed in by a simple sign with two cherries. These are no ordinary cherries either; for nearly 800 years, the ‘Zugerians’ have made their reputation on cherry liquor, cherry syrup and even cherry sausages.

Indeed, Zug is now a significant player to Switzerland’s global reach in commerce on par with the bankers in Zurich and the investors of Geneva. For starters the population of Zug is around 28,000 people comprised from over 132 nationalities – testimony to its burgeoning reputation in the technology and pharmaceutical industries headed by Siemens and Johnson & Johnson. A staggering 29,000 companies are registered in Zug from all over the world, yet drive a couple of minutes up into the hills nearby and you feel like a film extra in ‘The Sound of Music’. 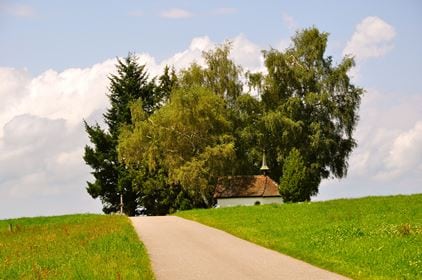 A town of contradictions then? I would much prefer to reveal more about the other side of Zug’s split personality, which is its beauty. The on-rush of foreign invaders, of which I am one, has not derailed Zug’s impressive tourism industry. When you take the time to explore the canton of Zug, the world of commerce seems very far away.

Lake Zugersee is the main calling card and is stunning. The water is surrounded by imposing mountains on all sides with Mount Rigi, at 1,800 meters, looming as the highest. A pleasant and flat bicycle ride of 38km around this lake welcomes the unsuspecting visitor into pretty lakeside towns such as Walchwil, Arth and of course Zug. At this time of year laid back restaurants complete with quiet swimming spots simmer very nicely in the hazy sunshine.

The acutely modern have barged into the old-school Switzerland, sadly emphasized by the increasing sight of new buildings being built on previously untouched hillsides. That said, 10% of the canton of Zug is a nature reserve, meaning one can disappear into the mountains and not see cranes, half built tower blocks and increasing numbers of convertibles loudly announcing their presence on the lake road.

Despite this onset of commerce into the canton, Zug remains an attractive place to explore. High up into the countryside above Zug, there is gloriously uninhabited countryside to enjoy and walk around. Mercifully the architecture transcends back into traditional Swiss chalet style and occasionally one chances upon centuries old buildings mercifully left alone by the modern day world below. Rolling grasslands with panoramic views await the lucky hiker and this feels like the proper Switzerland. After all, Zug’s origins date back to the 9th century when the counts of Lenzburg ruled the region and when the infamous cherry first came to prominence.

So what about Zug itself? Zug is tiny; you can walk around it just in time for a spot of lunch. As ever, the weather dictates what you can do as a tourist. When the sun is out, a pleasant wander around the old town square topped off by a bite to eat with the spectacular panorama of the lake and the mountains as your constant companion, greatly appeals. Unfortunately that is about it. There is good shopping in the centre with the Baarerstrasse Street hosting plenty of designer labels and restaurants.

But the key to visiting or living in Zug is getting outdoors. This is a place for people who like their sport and skiing. Indeed, such are the number of bikes on the road, it can feel like the Tour de France has visited the lake every weekend, making driving a trifle frustrating and when patience is an absolute must. 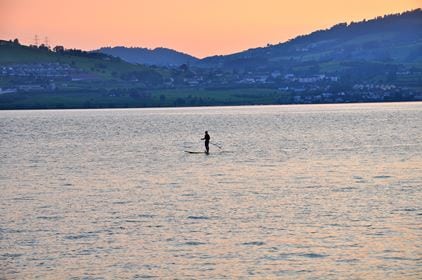 One feels that Zug has so much more to give on the tourism ladder because when the sun is out this is a wonderful part of Switzerland to explore and enjoy. Swimming and all manner of water sports are available on the lake, not least the latest craze of ‘paddle’ boarding. For those who fear crowded beaches and cripplingly high prices for the privilege, you will be pleasantly surprised. There are dozens of pleasant little coves and cleanly kept grassy knolls which are ideal for swimming. Given the general pricing in Switzerland, we pay just CHF50 (£30) for a season’s pass to Walchwil’s swimming area.

As is the norm in Switzerland, hiking and taking in the amazing scenery that this country is blessed with is a significant attraction. Drive 20 minutes up past Zug on the lake road through to Arth and you will have a rambler’s idea of paradise. Or you can make a road trip to the more renowned Interlaken’s of this world which are barely an hour way.

Zug is very likeable because it still retains its beauty characterized by the town’s background as a small fishing village, despite the changes the town is taking on. The locals are very polite, despite seeing the cost of living and property rise to ridiculous levels thanks to the likes of myself moving in. The low tax rates mean that commerce is unlikely to stop rumbling into Zug anytime soon. However, this little niche of Switzerland deserves recognition for its other personality, namely its natural and raw beauty.

Come and see Zug, it is well worth the visit and despite all the English and American accents out here you will see traditional Switzerland at its best.