Twenty-nine-year-old Benjamin Lesley Gillman, who served in Iraq in 2007, says he was proud to march alongside older diggers on Anzac Day in Sydney. 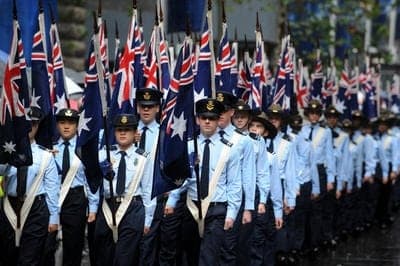 Iraq veteran Benjamin Lesley Gillman says marching alongside older diggers on Anzac Day was one of the best thing he’s ever done.

“It’s just a great day to get along with your mates and brothers and to show your respect,” the 29-year-old Cronulla resident said in Sydney after the march.

Mr Gillman served in Iraq in 2007 as part of a unit that concentrated on rebuilding the war-ravaged country.

He comes from a military family, with his grandfather serving in World War II and two cousins recently returning from Afghanistan.

He joined hundreds of other young veterans on Friday in leading the Anzac Day march in Sydney, as part of the RSL’s efforts to encourage young diggers to join the commemorations.

“What I just did then, marching with the old diggers, is one of the best things I’ve ever done in my life,” he said.

He said his thoughts were with the 40 fallen Australian soldiers who died in Afghanistan.

“It makes me feel good to be here while our brothers have done the ultimate sacrifice,” Mr Gillman said.

He said marching on Anzac Day is a reminder to him of Australia’s history and military tradition.

“The idea of mateship, the idea that we go to war for our country but we fight for the guy standing beside us,” he said.

Mr Davis said it is important to him to continue the Anzac tradition.

“Today is a really proud day for us to be able to come here and share the experiences of those who have come before, and to be those who are the new vanguard,” he said.

“We’re the new veterans of that spirit and it’s proud for us to be able to carry that torch.”

The NSW RSL expects about 20,000 serving and former defence force members to march.

The RSL allowed young vets from recent conflicts and peace-keeping missions to take the prime position in the Sydney march behind the NSW Governor-General Marie Bashir and the RSL executive.

Crowds of up to 10,000 people lined the streets of the Sydney city centre with umbrellas to pay respects to the diggers.