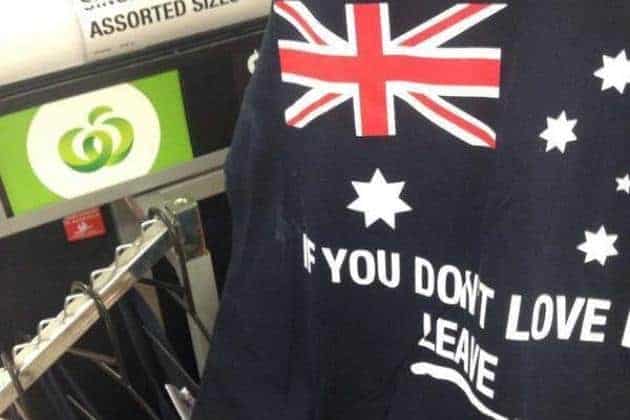 Australian retailer Woolworths has issued an apology after it was forced to pull racist singlets from its shelves.

The clothing, which was displayed in at least two outlets, including one in Cairns, depicted an Australian flag along with the slogan “If you don’t love it, leave.

An offended shopper spotted the singlets and posted a photo of them on Twitter, eliciting an avalanche of retweets and howls of outrage.

George Craig posted the image above on Sunday along with the message “@woolworths cairns, selling racist singlets for everyday low prices! #racist

“Pls RT @woolworths I’m outraged that #WOOLWORTHS are allegedly selling these bigoted singlets at their Cairns stores, posted Mariam Veiszadeh along with the image.

“@woolworths, why is your Cairns store dabbling in race hate and extreme nationalism? tweeted Jarah Crook.

“Honestly Tweeps. It’s way past time to boycott #Woolworths. This is appalling, posted @Roshart (aka Ros).

Staffers for Australian Greens MP Adam Bandt tweeted a demand for the singlets be withdrawn, calling the items “Divisive and ridiculous, while another user, Ruth Allen, tweeted with the provocative hashtag #everydaylowpriceseverydayracism.

Woolworths were quick to respond. The retail giant pulled the singlet shirts from shelves on Monday and issued an apology, blaming the incident on a mix up.

“It has come to our attention that two Woolworths stores were inadvertently stocking a singlet that we consider totally unacceptable, the company said in a statement.

“The singlet was not one we ordered. It was delivered to us in error and should never have been allowed on our shelves.

Woolworths said it was reviewing its processes to ensure the mix-up would not occur again. The company also insisted it did not share the attitude expressed on the shirts.

“The sentiment expressed on the singlet does not reflect the views of Woolworths.

“Woolworths has a policy of Doing the Right Thing’ which means we believe in fostering an environment where everyone is treated with dignity, courtesy and respect.

However, some Twitter users pushed back at the idea that the singlets were racist.

“How is this racist? If you don’t love australia go live in a country you do love. #woolworths, tweeted @indazone23 (aka Mel)