Witch hunt for Australia’s Wicked Campers… and their video response

A petition spearheaded by Paula Orbea is after the heads behind Wicked Campers who hire some of Australia’s most controversial camper vans. 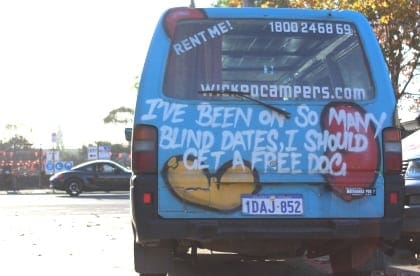 Paula Orbea has taken to social media to garner support of her petition to remove, what she calls, “misogynistic and degrading slogans and imagery” from the infamous rental camper vans used by travellers all over Australia. Wicked Campers are also popular with Australians travelling through Europe.

Petitioning John Webb — the founder of Wicked Campers, Paula wrote, “My 11 year old daughter was with her grandfather in the Blue Mountains a few days ago, when she read the slogan:  ‘In every princess, there’s a little slut who wants to try it just once’ on the back of a Wicked Camper van.”

Above: One of many similar comments on Wicked Campers’ Facebook page.  As far as we could tell they have also removed all their Facebook images for the Australian depots. Below: Examples of Wicked Camper vans being driven around Australia follwed by the company’s video response to the controversy 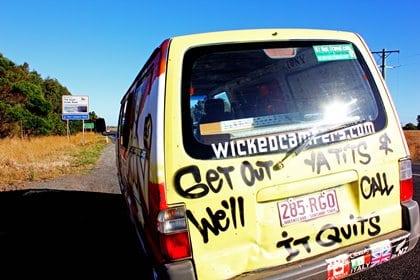 Orbea said that thanks to the accompanying graphics on the van her 11-year-old daughter figured out what the slogan was communicating. “This business, makes us picture that and many other degrading things,” Paula wrote in her petition.

“My daughter was upset by this because she felt, as a girl, that the slogan was referring to her and it made her fear being perceived that way – especially by someone she may cross paths with who may agree with that perspective,” said the pre-teen’s mum. 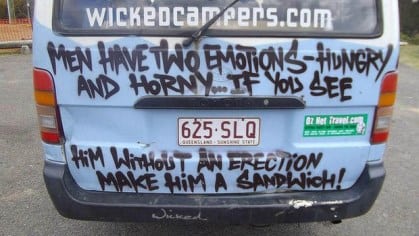 Ms Orbea continues to say, in her petition addressed to John Webb of Wicked Campers, Jarrod Bleijie, Queensland Attorney General and Campbell Newman, Queensland Premier, that the particular phrase promotes paedophilia.  She has also reported the company to the Australian Advertising Standards Authority.

“[It] resonates very badly with everyone who thinks it’s abhorrent to sexually assault a girl, especially by groomed males who think ‘she wants it’.  Slogans such as this rings too familiar to real life atrocities, such as the recent discovery of Rolf Harris’s sexual assaults; enacting on a girl as young as eight.” 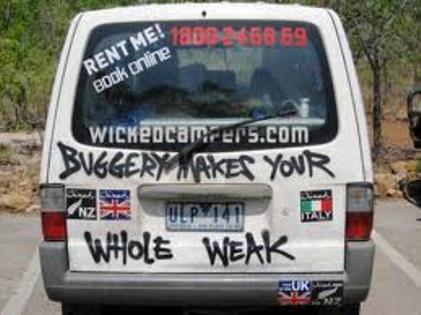 “A wife: An attachment you screw on the bed to get the housework done.” And “I wouldn’t trust anything that bleeds for five days and doesn’t die!”

One of the company’s latest more racist leaning slogans reads: “Save the whales, harpoon a Jap.” 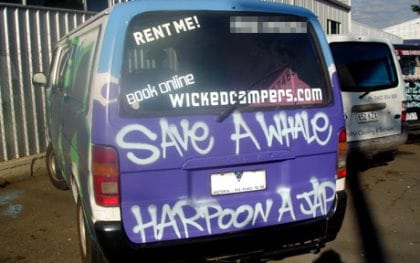 It’s reported that the Queensland Government will discuss the complaints against the company later this month, with those in support of Orbea calling for the vans to be held to the same standard as billboards, copping the same scrutiny as outdoor advertising. 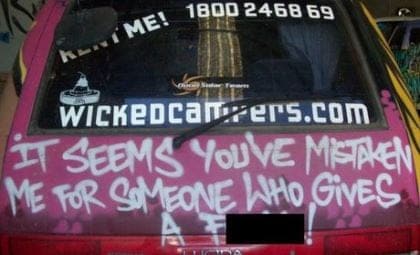 When Wicked Campers finally responded to the complaints this is what they came up with: