What’s next for Nigel Farage?

2015 saw a surge in support for Nigel Farage and the United Kingdom Independence Party (UKIP). But with the Tories claiming a majority victory at last week’s election and UKIP only one elected MP, this support has not resulted in the coalition chaos that the media so fervently predicted. So after his resignation as leader […]

2015 saw a surge in support for Nigel Farage and the United Kingdom Independence Party (UKIP). But with the Tories claiming a majority victory at last week’s election and UKIP only one elected MP, this support has not resulted in the coalition chaos that the media so fervently predicted.

So after his resignation as leader of the party, Nigel Farage announced that he is going on holiday for the first time since 1993. It is arguably well deserved, and in his absence Farage has recommended deputy leader Suzanne Evans as acting party leader.

What I find particularly intriguing is that he has refused to rule out leading the party at a later stage. This almost certainly appears to me as a quiet confidence that the party will win more seats at the next election.

After all, the swing towards the party was as monumental as some pollsters predicted. In terms of votes, UKIP came third overall across the UK, surpassing the Lib-Dems. They came second in 118 seats, and many of these were safe in Labour constituencies. Will this momentum be enough to persuade Farage to stand for party leadership before the next General Election? Whatever happens, he has left some very big shoes to fill.

UPDATE: Since the publication of this article, UKIP have rejected Farage’s resignation letter, stating that there was ‘overwhelming evidence’ that party members did not want him to go. He will now stay on as party leader.

More people voted for UKIP than for the SNP and Liberal Democrats put together. Farage pointed out in his resignation speech that it was time for Britain to reform its electoral system so that citizens can feel fairly represented.

The disproportionate representation in the House of Commons in regards to percentage of votes has been widely discussed in the days after the election, with the BBC publishing this graph (below) from the Electoral Reform Society comparing the current voting system in Britain with the D’Hondt – or proportional representation – system, which is how we vote for MEPs in Europe where UKIP (ironically) commands 24 seats. 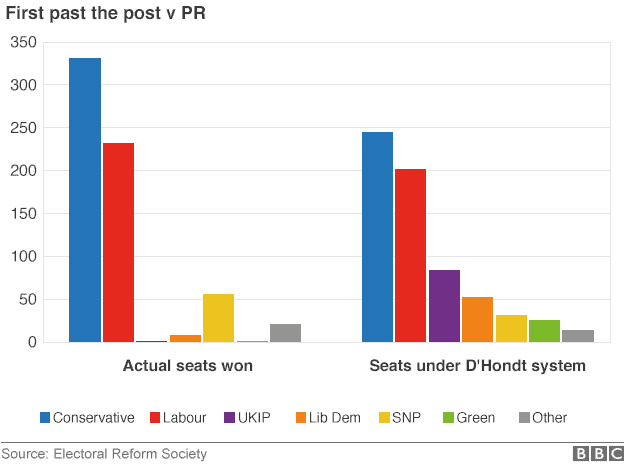 There is also the Alternative Vote (AV) system, which we refer to as Preferential Voting in Australia. It could be argued that if some voters could decide to vote firstly for a minority party, and secondly for the Conservatives or Labour, then these minority parties wold have received a higher percentage of the national vote. However, it would not necessarily result in more seats for minority parties.

But AV was firmly rejected by Brits at a referendum only back in 2011. So don’t expect another chance at change any time soon.