by Matt Dawson
in Lifestyle, News 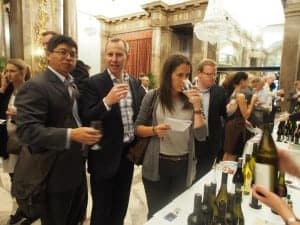 Around 120 guests gathered as part of Western Australia Day celebrations. For the fourth year running, a selection of the state’s wine producers hosted tasting tables, giving the London crowd the opportunity to sample the latest offerings from across different regions and varying grape varieties.

“With the arrival of Thomas Walters, a botanist and First Fleet settler, grape wine cuttings from Cape Town were introduced to Western Australia.

“Having collected them from the fleet’s stopover for supplies in Cape Town — Thomas later planted the cuttings near Guildford on the banks of the Swan River — first crush 1834 — and WA’s wine production has been increasing ever since,” Mr Skipworth said.

Accounting for 30 per cent of the nation’s premium wine production and around 400 wine producers across the state, Western Australian wines represent a multi-million dollar industry.

“WA premium wines have won awards in just about every country that holds a wine show, highlighting the quality of the wines produced  – WA holding its own against other, old and new world producing nations,” Mr Skipworth said.

25 wine producers were represented at the event, including Arlewood, Cullen and Haughton.