A live 12-hour interactive show about the Great Barrier Reef, featuring underwater tweets and footage from divers, is being broadcast on YouTube. Watch the video below. 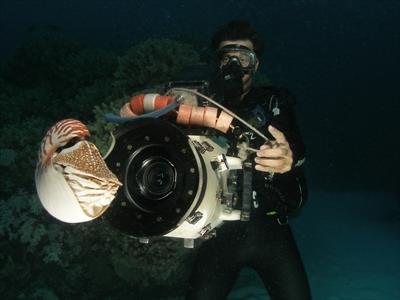 VETERAN diver Richard Fitzpatrick will point out Nemo, sharks and vibrant coral as he takes millions on a live tour of the Great Barrier Reef – online.

ReefLive, a live 12-hour interactive online show about the reef, will be broadcast on YouTube from 10am (AEST) on Friday to coincide with World Ocean Day on Saturday.

Live footage taken by three divers as they swim around the outer reef dive site, Pixie Pinnacles, will be shown for 30 minutes during each hour of the show.

“It will be just as good at night as during the day,” Mr Fitzpatrick, a cinematographer and marine biologist, told AAP.

“You’ll see everything from Nemo, to all the pretty-coloured groups of fish to the big predators like the barracuda and trevally.”

Minke whales could also make an appearance, he says.

Divers will give commentary as they swim amongst the marine life and they’ll take questions from viewers via Twitter using waterproof iPads.

During the rest of the show, experts will discuss the reef and various groups will talk about what they’re doing to help protect the 2300 kilometre eco-system.

Mr Fitzpatrick says ReefLive is an opportunity for a large number of people to see the beauty of the reef and learn about its importance.