by Matt Dawson
in News 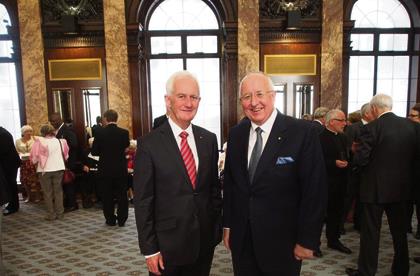 Following a commemorative service in The Queen’s Chapel of the Savoy, over 100 Western Australians and associates attended a lunch reception at Australia House.

Rio Tinto’s Chief Executive, Sam Walsh AO, a recent arrival to his post in London, gave the annual address during the church service. Mr Walsh spoke of the important transformation of Western Australia, from its infancy as a British colony in 1829 to the vibrant, multicultural and inclusive society of today.

“We have established a modern, clean capital city with its steel and glass skyscrapers which, along with our regional towns and cities, are built on some of the oldest geological structures on Earth,” Mr Walsh said.

Mr Walsh highlighted the multicultural face of WA today, with some 200 nationalities, 100 religious faiths and 170 languages spoken across the state.

The WA Agent General, Kevin Skipworth highlighted the importance of the State Government and resources companies working in partnership with WA’s local aboriginal communities so they can share the benefits of our mining activity, particularly through employment.

“That we bring together so many Western Australians, so far from home year after year is testament to the value we place on kinship and our shared heritage.

“It was a great pleasure to hear Sam Walsh address the congregation on this significant occasion. Sam is a role model to fellow Western Australians through his achievements in business and dedication to the community through culture and the arts in our state,” Mr Skipworth said.

The Western Australian Government’s Europe Office will host a Wine Tasting event this Thursday 13 June as part of its Western Australia Day celebrations. For more information and to RSVP email [email protected].