You know how crocs are - take food from their mouth and they take your hand instead, as this Australia zookeeer found out. 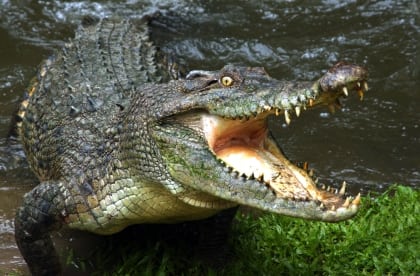 During a crocodile feeding show at Australia’s Shoalhaven Zoo, cocky zookeeper Trent Burton realized he was about to become croc lunch.

Camera footage of a potentially fatal incident at the Shoalhaven Zoo this week shows how a crocodile snaps his mouth closed around zookeeper Trent Burton’s hand and drags him into the water of his enclosure.

The couple who had their video camera on while the incident happened said it was completely terrifying.

In the video Trent, 31 can be heared commenting on how big the crocodile, known as Big John, was once he came out of the water to be hand-fed by Trent.

However, things went horribly wrong when, as can clearly be seen on the video, the crocodile slams his jaw shut around his feeder’s hand and proceeds to drag him in to the water in the enclosure.  Upsetting and horrifying screams can be heard on the video as he is powerless against the monster size crocodile.

View the Seven News report, below. Warning: some may find the footage disturbing.

To the relief of Trent and eyewitnesses, he eventually managed to tear his hand out of the croc’s jaws just in time to escape certain severe injury and potentially death.

Burton told Seven News that, “A very dumb, small brain fart on my part – it seems more dumb when you watch it. I was fighting for my life.”

Trent had, under the circumstances, suffered only minor injuries including a 10cm long gash on his left palm and a broken knuckle in his right hand.

Owner of Shoalhaven Zoo Nick Schilko told Daily Mail: “Trent was feeding the croc… He flipped the food at his (the crocodile’s) face. He caught it in his mouth and as he’s tried to flick it up to put it in his mouth further, Trent tried to reach in and take it out of his mouth.

“He was beating himself up over what he did. Basically his hand got caught in the moment… the crocodile has gone ‘bonus’ and started backing up to the water and dragged him all the way into the water.”

Speaking to The Sun, Marlene Orr said, “It was the scariest thing I have ever seen in my life. We saw the trainer taken by the crocodile.  I’ve seen them in the wild, lying on river banks and have seen them at Steve Irwin’s Zoo, but never like this. It was too scary.”

Mr Schilko added that Trent will be welcome back at work as soon as he is ready.

Millennials are more pro-environment than previous generations and less likely to believe driving gives them independence.