Lara Bingle has escaped a jail sentence for twice driving on a cancelled licence.

by Jacqueline Le
in News 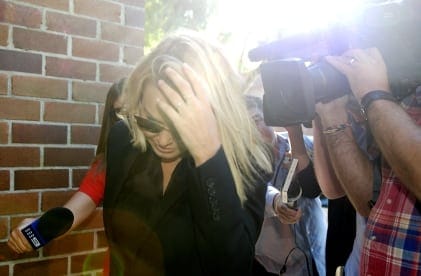 Lara Bingle has avoided a jail sentence for multiple driving offences, which her lawyer says she racked up due to her “unworldly” approach to licensing and administrative affairs.

But the magistrate who handed the model a six-month suspended sentence on Tuesday told the celebrity that no one is above the law.

“These laws apply to everyone in the community in exactly the same way. They are not there to be annoying,” Magistrate Clare Farnan told Bingle, who was also fined $2000 in Waverley Local Court.

The 27-year-old had pleaded guilty to two charges of driving on a cancelled licence.

Her lawyer on Tuesday said Bingle was unaware her licence had been cancelled when police pulled her over near her home in Edgecliff in Sydney’s east in September 2012.

She thought her right to drive had only been temporarily suspended as a result of speeding offences, not cancelled.

“My client is somewhat unworldly when it comes to administrative things because a lot of it has been done for her,” said Michael Ainsworth.

“Had she knuckled down and looked at it, she would have seen that she wouldn’t have been allowed to drive.”

But in sentencing Bingle, Ms Farnan was critical of the model’s failure to follow the road rules.

“Your driving record is very poor,” she said.

However, she and the prosecution conceded that police and road authorities had not provided adequate information to the model about the restrictions.

Nevertheless, Lara Bingle should have followed up on this before getting behind the wheel.

“You cannot ignore it and continue to drive. You simply have to accept it or make legal representations,” Ms Farnan said.

Bingle has been disqualified from driving for two years.

The model appeared in court alone in her trademark black from head to toe but happily posed for photos and chatted with fans before entering the court room.